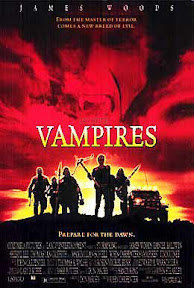 Until this week, I could claim that no movie ever made me physically ill. Yet within minutes after finishing John Carpenter's John Carpenter's Vampires I began to feel cramps, then chills, and for two days afterward I was a physical wreck. After the fact, people assure me that I must have caught "that stomach bug that's going around," but my friend Wendigo, who watched the film with me, thinks differently. He was unaffected, but he has more fortitude when dealing with films like this one. While not physically sickened, he was nevertheless indignant over the whole spectacle. And why not? Here we have the director of one of the greatest horror films hitting a career bottom. Ghosts of Mars was an improvement on this. It's one of the most impersonal films a director has ever sought to claim ownership on in the title, and Carpenter's guitar-based score, one of his worst, doesn't really help individualize it. It's one of the least suspenseful and least scary movies ever to be credited to a "Master of Terror." Wendigo didn't even really want to own it, but it was in a two-for-one bargain pack with Bram Stoker's Dracula, and now he's stuck with it. What the hell happened?

To me, it's really just a crap movie. But to Wendigo, it's worse: a travesty of an above-average vampire novel, John Steakley's Vampire$. Steakley wrote a book about the toll vampire hunting might take on a person, how killing undead creatures for a living would affect how you live with yourself and other people. Vampire$ is a character study above all and a sort of speculative sociological study of the kind of people who might end up vampire hunters. Think of any number of movies about war veterans and their difficulties dealing with civilians or coping with civilian life and you'll get a sense of what Steakley wrote. The dollar sign signifies that vampire hunting is less a crusade and more a high-risk, low-satisfaction job for the characters, though all of them feel some kind of moral imperative to carry on the work.

Carpenter and screenwriter Dan Jakoby use two or three scenes and two or three characters from Steakley's novel, as well as the southwestern locale, but theirs is mostly an original story in the most technical sense of the word. They open with a Steakley-esque scene of a raid on a vampire nest, followed with a motel celebration with hookers broken up by a pissed-off party pooper of a master vampire, Valek (Thomas Ian Griffith). Jack Crow (James Woods) and his crew seem like a natural Carpenter cohort, a team of Hawksian professionals who gotta do what they gotta do, but Valek promptly massacres all of them but Crow and the oafish Montoya (Daniel Baldwin). He wastes a motel full of perfectly good prostitutes except for one (Sheryl Lee) whom the smitten Montoya tends to and dotes on despite an obvious vampire bite and an inevitable turning. This mistranslates a subplot of Vampire$, Wendigo says, in which one of the hunters falls for a girl who is a thrall of a master vampire, though not one herself. The attack itself is ineptly filmed, a supposedly chaotic moment of terror portrayed through a slow-motion montage of dissolves. The lack of appropriate pacing is typical of the whole film.

Valek, who has no counterpart in the novel, is after a special cross that will facilitate the completion of the botched exorcism that resulted in his becoming the first-ever vampire back in the 1300s. Completing the ritual now won't undo his vampirism, but it will turn him into a presumably invincible daywalker. This brings up a pet peeve of Wendigo's that he blames on Anne Rice. She put it in people's minds, he claims, that the "first" vampire has to be the most interesting one, so that any number of bad movies give us the "first" as the big bad. As in the novel, Crow works for the Catholic Church. In the film, church authorites give him grief when he wants to know what Valek is up to. The root of the trouble is a treacherous cardinal (Maximillian Schell), who has no counterpart in the novel, in cahoots with Valek in exchange for immortality. Everything more or less leads up to the big ritual, which will require Jack to be burnt at the stake with a priest officiating. Meanwhile, Montoya remains stupidly determined to protect the vampirized hooker, with predictable consequences and complications for his friendship with Jack. In the end, some characters survive that don't in the novel, and true love is allowed a two-days' head start before it's hunted down and killed.

"Come on, Padre, my nuts are on fire here!" Actual dialogue from the movie.
Our challenge is to limit ourselves to the key ways in which John Carpenter's Vampires sucked. It's biggest offense, as far as Wendigo is concerned, is how it took an idiosyncratic novel and turned it into an utterly generic mid-90s vampire picture. The acting is bad all around. Sheryl Lee has a thankless, career-crippling role and Daniel Baldwin is a Baldwin. Acting with him, Wendigo says, is like talking to a hamburger. On the other hand, her body is one of the film's few real assets. James Woods seems to be making up his role as he goes alone. Carpenter and Jakoby seem to have no idea for the Jack Crow character except that he's a badass. Woods's performances ranges from mindless badass stoicism to self-righteous temper tantrums and thuggishness (unlike the more decent Crow of the novel) to Bruce Willis-like Die Hard -style fight-scene invective. Schell's performance is a disgrace for an Oscar winner; was F. Murray Abraham unavailable? Thomas Ian Griffith as Valek is a cookie-cutter villain in what Wendigo calls the "Count Chocula von Vampire" mode. If you've seen any B-movie vampire of the mid-to-late Nineties, he claims, you've seen Griffith's performance already. Actually, if you've seen any Griffith movie, you've seen this performance already.

Oh so special effects. Below, vampires brought into the sunlight die of supernatural forearm flatulence.

Wendigo remembers seeing Carpenter claim that the thing that most excited him about making John Carpenter's Vampires was the opportunity to use a cool new burning-vampire effect. That marks the film as true kin to the other consciously effects-driven vampire film of the decade, the Rodriguez-Tarantino From Dusk Til Dawn. Wendigo doesn't like that one, either, but it has an intriguing opening act before the effects showcase, until Selma Hayek finishes her snake dance. John Carpenter's Vampires makes the whole of From Dusk look like its first act. The big effect seems to consist of having little blowtorches stuck up the sleeves of shirts and blouses. By today's standards these highlights look even more pathetic. So is the direction as a whole. The only thing the film has going for it visually, Wendigo feels, is the outdoor cinematography of Gary B. Kibbe. For me, though the most memorable thing about the film is all the walking.

Carpenter apparently believed that walking is cool. Walking makes you a badass. Walking in groups makes everyone a badass. Get into that stride and a house can blow up behind you but you won't notice. You might be a vampire clawing out of the earth, but a good badass walk is like a power wash. You'll show up for your next attack scene squeaky clean. There seems to be a helluva lotta walking in this movie, but it doesn't seem to get anyone anywhere.
Posted by Samuel Wilson at 9:53 PM

What a badass review.
Cool stuff.
This is indeed a weak 90's film.
I didn't mind the vampire burning effects, though.

"Sheryl Lee has a thankless, career-crippling role and Daniel Baldwin is a Baldwin. (Hee hee).

I couldn't agree more. This movie was one of those rare films were all participants are left to their absolutley worst devices. You've covered Baldwin and Lee nicely, but let's not forget James Woods overacting his way into a new ass-holian realm of bad.

And finally, the artless, grinding noise of the John Carpenter soundtrack. Jesus, I think I feel a fever coming on.

P.S.: How could this be the same man that gave us The Thing, which is one of my all-time favs and one of the few remakes ever done worth a damn?