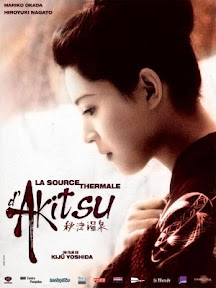 When I seek cinema entertainment abroad, Japan is my third-favorite stop on the wild-world-of-cinema map after Italy and France. I know a lot of people in that neighborhood: Kurosawa, of course, but also Kenji Fukasaku and Seijun Suzuki along with the establishment masters like Mizoguchi, Ichikawa, Oshima, etc. Needless to say, there's still a lot of uncharted cinematic territory in the island nation, but the intrepid Alan Fish at the Wonders in the Dark blog recently blazed a trail through the career of a neglected Japanese master. Yoshishige Yoshida (also known as Kiju Yoshida) has directed feature films from the early 1960s into the early 21st century, his last appearing in 2002. Surveying a number of key films from the Sixties through the Eighties, Fish has ventured a case for considering Yoshida among the top rank Japanese directors. Thanks to Fish's colleague at Wonders, Sam Juliano, I now have an opportunity to explore Yoshida's work myself.

My initial thought was: any director with a picture called Eros Plus Massacre in his filmography will have my attention -- but we'll get to that one later. We start with a project Yoshida undertook for a star actress, hia future wife Mariko Okada, who had taken a hand in the production of her 100th movie. Okada was busy, not old; she was only 29 at the time, but the milestone was a big deal for the publicity department of the Shichoku studio and gets a separate credit even before the studio logo appears. I wasn't familiar with the name or the face at first, but a filmography search revealed that I had seen her in Hiroshi Inagaki's "Samurai" trilogy from the 1950s. I'll be seeing a lot more of her in Yoshida's work, and after Akitsu Springs that sounds like a good thing.

The movie, adapted from a Japanese best-seller, illustrates the attraction-repulsion relationship of Shusaku Kawamoto (Hiroyuki Nagato),an ailing returned soldier and aspiring writer, and Shinko (Okada), the young proprietor of the title resort. The time is the bitter end of World War II, and Shusaku finds his own home a bombed-out wreck. He's in a bad way by the time he reaches Akitsu, and Shinko makes it a project to nurse him back to health and discourage him from killing himself. The benevolence makes her feel good. His will to live is really restored when he feels a great urge to comfort Shinko when she breaks down in tears upon hearing the news of Japan's surrender. But when he hits another trough of frustration later, he invites Shinko to die with him. She laughs at the idea initially, but when he confesses his love she decides to join him.

Shusaku's plan is to tie their bodies together and jump together into the local stream. In an oddly matter-of-fact scene he goes about binding Shinko while she natters on about how her relatives and friends will react to her demise. When he starts to put the rope around her chest, she collapses in a giggling fit; she's very ticklish. The absurdity of the whole episode finally makes him laugh as well, and the suicidal spell is broken. Before long, however, Shusaku quits the Springs and goes to Tokyo, where his brother is a shaming literary success and he himself soon has a wife and a baby. Akitsu becomes a refuge from the frustrations of literary and family life, but he never wants to stay for long. Eventually, Shinko decides that the only way their love will last is if they die as they'd planned long before....

Akitsu Springs is Romantic with the literary capital R, not only in its emotional intensity but in Yoshida's vivid use of expressive landscapes. The location cinematography by Toichiro Narushima is ravishing, and Yoshida's camerawork makes the film a treasure simply as a cinematic travelogue of postwar Japan. Hikaru Hayashi's music sustains the Romantic mood with a main theme that gains tragic resonance as the film goes on.

The story seems to say something about postwar Japan -- why else start in August 1945? -- but the romantic elements of the story really are universal. But I couldn't help noticing a similarity to Nagisa Oshima's Violence at Noon in Akitsu Springs' concern with deferred suicide. Maybe Japanese cinema of the time was coming to critical terms with the romantic ideal of double suicide and its psychological or social implications. Yoshida's approach is more straightforward, as his picture is more melodramatic than Oshima's, more readily pegged as a "women's picture" or a "weepie." But it has an emotional power to which Oshima doesn't aspire, the cumulative effect of Yoshida's pictorial brilliance -- this is a strong Exhibit A in the case for his genius -- and Mariko Okada's riveting performance, ably supported by Nagato. Everything builds to a climax that combines acting, cinematography, landscape and Hayashi's score for an almost operatic effect.

To give you a full sense of the pictorial richness of Akitsu Springs I could take screencaps until I wouldn't know when to stop. The picture's plot might sound conventional or cliched to some, but Yoshida's direction makes it visually compelling from beginning to end. Whether the director lives up to this early triumph remains to be seen -- by me, that is. Expect to see more of him here in the months to come.

For now, check out the original Japanese trailer, uploaded to YouTube by TheAsianVisionS. No subtitles, alas: Akitsu Springs was never released commercially in the U.S., and only had its film festival premiere in 2005! After seeing the film, that fact becomes a mystery.

Posted by Samuel Wilson at 9:38 PM

"Akitsu Springs is Romantic with the literary capital R, not only in its emotional intensity but in Yoshida's vivid use of expressive landscapes. The location cinematography by Toichiro Narushima is ravishing, and Yoshida's camerawork makes the film a treasure simply as a cinematic travelogue of postwar Japan. Hikaru Hayashi's music sustains the Romantic mood with a main theme that gains tragic resonance as the film goes on."

Samuel, you are really talking my language here, and I am absolutely thrilled to read your response to this great Sirksian masterpiece by Yoshida, certainly one of his greatest films and my personal favorite. I believe the admittedly repetitive music by Hiyashi may be the best Japanese score ever. In any case I thoroughly enjoyed this magnificent review and I thank you exceedingly with the very kind words about Allan and myself!

Sam, I was thinking more of Minnelli than Sirk when I watched this, but it was really a gut feeling since I haven't really seen much of Sirk (Sign of the Pagan is not typical!) or Minnelli's dramatic films.