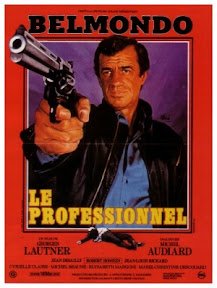 There was a time, perhaps, when Jean-Paul Belmondo was the poster boy of global art-house cinema. He was a major star for about forty years, and is still semi-active today after recovering from a stroke, but he'll probably be remembered most when he passes for a handful of films from early in his career. In all likelihood the headlines will identify him as the star of Jean-Luc Godard's Breathless, a reminder that he was specifically the poster boy for the French New Wave of fifty years or so ago. Before long, however, Belmondo was eclipsed as the global face (male division) of French cinema by his occasional co-star Alain Delon. In the United States there are Delon box sets and collections; I've never seen a Belmondo collection in a local video store. Delon did more international work and remains an icon of cool for movie buffs thanks to his work for Jean-Pierre Melville and others. Like Delon, Belmondo could move easily enough from pop cinema to art-house fare, but his star vehicles don't seem to have traveled or endured as well as Delon's. He definitely doesn't seem to have the same following in America that Delon does. I've wondered about that for a while and was curious to see some of Belmondo's later work to see if I could figure out an explanation.

Lionsgate has done me a service by issuing a very affordable DVD of this action thriller starring a 48 year old Belmondo. The DVD uses an English title (and includes an English dub along with the subtitled original) but I'll stick with the French tag to avoid confusion with another French film, Luc Besson's Leon, that's already known here as The Professional. Director Georges Lautner co-wrote this adaptation of a novel with the father-son team of Michel and Jacques Audiard. It's one of the first writing credits for the junior Audiard, who went on to direct last year's instant-classic prison film, Un Prophete, and nearly the end of the line for his father, a frequent collaborator with Lautner. 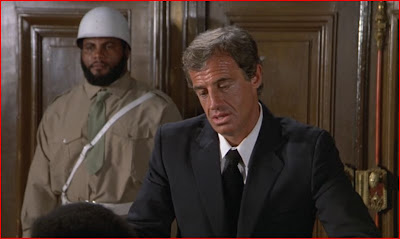 Le Professionnel is definitely a film of its time, bridging the Seventies' suspicion of the state and the Eighties' emphasis on completing the mission (see Rambo, etc.) with a revenge storyline. Belmondo is Joss Beaumont, whom we first see on trial in an African court for attempting to overthrow the government of Malagawi by killing its President. He's been doped up in an effort to make him a compliant witness, but that (along with torture, one suspects) leaves him barely able to stand in the dock to hear his sentence. When he faints, he's dragged to an antechamber for more drugs; he puts up a fight but is overwhelmed and sedated anew. President Njala shows his mercy by sparing Beaumont's life and sentencing him to prison. 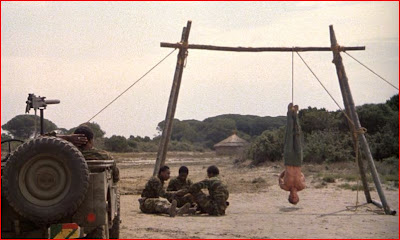 Joss adapts well enough but can't stand seeing other prisoners beaten up. Finally he and another con contrive a bloody escape on an isolated patch of road. They flee through a small village, warning the villagers that the army is hot on their heels. This is the right thing to do, since Njala's forces will destroy anything in their path to smoke out the fugitives. While Joss's comrade can't resist the temptation to fight it out with the army, Joss himself makes good his escape and makes his way back to France. Revenge is on his mind. He informs important people that he's returned, because he wants them to come after him. That's the easiest way for him to get at them. 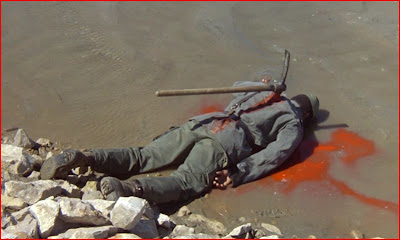 Here's where we begin to learn the real story of Joss's misadventure in Africa. The French government had sent him to Malagawi with orders to kill a vicious despot, but a change in policy or personnel caused a change in plans. Rather than recall Joss, the government ratted him out. Now he's out to settle scores, not just with his superiors but with Njala, who is coming to France for a state visit. He still intends to see Njala dead; what he intends for his erstwhile bosses is unclear. Having all of this explained long after the fact hinted at something wrong with the movie. It seems to me that if we're watching a revenge story and we're supposed to empathize with the revenger, we should see his betrayal up front so we can appreciate his grievance. There's little sense of outrage in Le Professionnel, compared to what we might see in an American version of the same story, and I couldn't shake a feeling that director, writers and star didn't really take the situation very seriously. 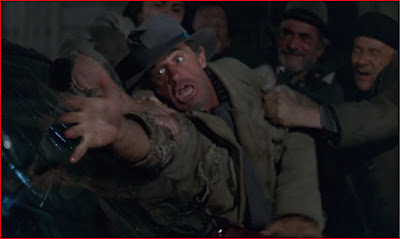 Belmondo: Le Roi des Winos
That brings us to Belmondo. We're on his side from the start because of the kangaroo-court treatment he receives in Malagawi, but once he reaches France the revenge story becomes something of a lark or a romp, with action on a comic book level. One of the first things Joss Beaumont does is befriend a bunch of hobos so he can dress up as one, create a scene with them to distract the cops staking out his wife's apartment, and sneak inside. It's the sort of scene you'd expect to see in a silent comedy and it plays like an excuse for Belmondo to act goofy. Maybe I'm being humorless as a critic, but Belmondo often seems too humorous for his subject. Later, he invades the hotel room of an ice-cream soda magnate in order to meet Njala's European wife, with whom the magnate is having an affair. Belmondo asks if the man facing him is in the ice-cream soda trade, then identifies his own trade as "espionage and brawling" in the subtitled version, "espionage and knuckles" in the dub. Here the star tips his hand and exposes the entire story as no more than an excuse to show Jean-Paul Belmondo beating people up, or occasionally killing them. The fights are more like gags than important points in the plot, though his showdown with a particularly nasty official (Robert Hossein) is more like a spaghetti-western showdown in the middle of Paris.

Hossein's character, Inspector Rosen, is built up as Joss's arch-enemy, but the most vicious thing he does in the picture, as far as I could tell, was to bring a lesbian policewoman with him to interrogate Joss's wife. Rosen plays the good cop while his sidekick strips Mme. Beaumont and promises to show her what she can do with a bar of soap. The payoff is when Joss saves his wife from bathroom rape by choking out the evil woman in the bathtub. It struck me as the most unpleasant scene in the film for its flaming homophobia, but I can't help suspecting that it was one of the most crowd-pleasing scenes for its original audience. It highlights the crass nature of the entire project, a trashiness that comes through despite Ennio Morricone's effort to give the film some musical gravitas. 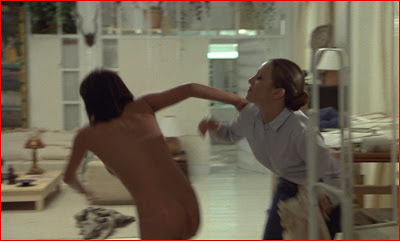 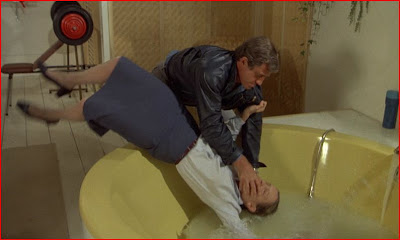 Belmondo's treatment of a lesbian antagonist may not seem politically correct, but rest assured that he believes in keeping people closeted regardless of their sexual orientation. 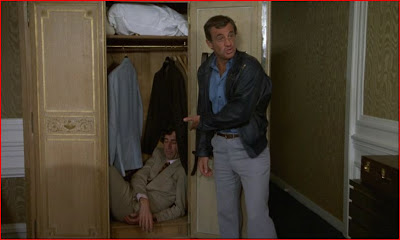 I don't mind crass and I don't mind trash, but they somewhat undermine Lautner's attempt to sustain tragic suspense at the end. For a seeming eternity after he's settled scores with Njala, Joss strolls toward a helicopter he's arranged for to take him to freedom while bureaucrats dither over whether or not to kill him. It should be tragic if they do, but if Beaumont dies, it won't be like when Belmondo's character gets it in Breathless. I had a feeling that it would be more like when a cartoon character dies, but you know he'll be back in the next picture. Le Professionnel is such a star vehicle (you should see the worshipful opening credits: nothing but Belmondo iconography) that any pretensions to any deeper purpose look silly. 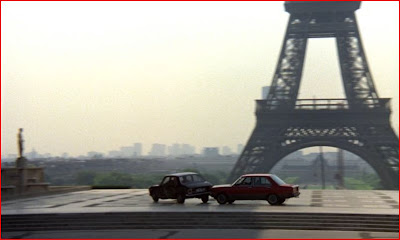 As a mindless action film, Le Professionnel is fairly entertaining. I do not mind seeing Jean-Paul Belmondo beat people up, and Lautner films a nice car chase in the neighborhood of the Eiffel Tower. But I did expect something more from the star. Breathless and Pierrot le Fou, Le Doulos and Classes Tous Risques, to mention some of his early films that I've seen, set a standard that Belmondo apparently didn't try to maintain. He remained a star on the strength of his raw charisma, I assume, while sticking to crowd-pleasing action films. I ought to go easy on the assumptions after seeing a single film, but I can't deny my disappointment with what I saw. Maybe I should write it off as a mismatch of star and subject matter. I'd definitely be willing to give Belmondo another try (and I'll accept recommendations, please), but if my original question was why he doesn't have the reputation or the legacy Alain Delon enjoys, Le Professionnel does look like the beginning of an answer.

You may be able to figure something out for yourselves from this trailer, uploaded to YouTube by AmberChiaCasting:

Posted by Samuel Wilson at 5:47 PM

Morricone score is definitely the most moving aspect of this otherwise pretty dull film.
Perhaps a more memorable 'star vehicle' for Belmondo is 'L'alpagueur'(1976) which is rather low-key but has stronger performances than 'Le Professionel' and great atmosphere.

I think a good later Belmondo film is Claude Lelouch's "Les Miserables" (1995). In this movie about a truck driver who helps a Jewish family try and escape during the Nazi occupation of France, Lelouch loosely follows the plot of Victor Hugo's novel. It's a good movie and Belmondo is great, shades of his early stardom. But you're right: I can't think of much else that he has done that is worthwhile.

Heard a lot of good about "Les Miserables" but haven't seen it yet.

Belmondo is still awesome, though.
He's a bit like Jess Franco - he as a person is frequently more interesting than the the films he's done!
Another really good Belomodno film is J-P Melville's terrific adaptation of a Georges Simenon novel "L'Aine des Ferchaux"(1963). That one will stand the test of time all right.

Jason, I remember seeing good reviews of Lelouch's film when it came out, with an emphasis on it being a kind of comeback for Belmondo. I'll keep an eye out for it.

Alex, I'm itching to see both L'Aine des Ferchaux and Leon Morin, Priest. Le Doulos was proof enough for me of what Melville and Belmondo could do together. I'll keep an eye out for L'alpageur as well.

I grew up seeing lots of Belmondo films on TV, "Le Professionel" was one of the first I'd seen and I must say that back then it did make an impression, especially the ending.
But having recently discovered stuff like "Le Doulos" I feel "Le Professionel" pales in comparison.
Curiously, in 2001 Belmondo again starred in "L'Aine des Ferchaux"(this time for TV and playing another character).