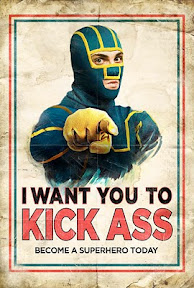 After years of seeing superheroes in comic books and movies, why has no one, to our knowledge, put on a costume and tried to be a real-life superhero? That question inspired Mark Millar to write the Kick-Ass graphic novel, the basis of Matthew Vaughan's latest film, and it's a question asked aloud by the comic-store geek who will become "Kick-Ass" with a green scuba outfit, a couple of martial-arts sticks and a Facebook page. You'd be excused for thinking that Kick-Ass would portray the career of a costumed hero in the real world. But between comic-book world and real world comes movie world, and that's where the film is set. In movie world, like the real world, people don't run around in strange costumes fighting crime, unless they're in a comic-book movie. Likewise, and with the same general exceptions, they don't have superhuman or magical powers. Kick-Ass works from the premise that it would be difficult to be a costumed superhero in movie world (which I guess is where the actual comic book also takes place), but movie world has different rules from the real world, so that our hero's task won't be as difficult as we first assume. We get a taste of what real-world Kick-Ass would be like by the end of the first half-hour, when the hero has been stabbed in the gut and totaled by a car on his first adventure. In movie world, however, this ordeal bestows advantages on our costumed neophyte. The various metal reinforcements required by his bones don't hamper his mobility, but enhance his resilience. Better still, he emerges with a degree of imperviousness to pain that will give him more staying power in combat. On top of that, Kick-Ass acquires allies in his haphazard war on bullies and muggers. Big Daddy and Hit Girl demonstrate the feature that most distinguishes movie world from the real world: every claim ever made for the martial arts is true. Through rigorous training, an 11 year old girl can be a relentless killing machine, olympian in acrobatics and proficient in any weapon that can be bought online. She and her vengeful-ex-policeman father stand as proof that anyone could be a superhero, in the sense of wearing a costume and kicking ass, in movie world, even as Kick-Ass himself discovers an actual answer to his original question: people in real/movie world (here the line blurs a bit for thematic purposes) don't become superheroes because they, unlike the orphans and loner vigilantes of comics, usually have something to lose. By the time he realizes this, however, he, by operating publicly as opposed to his two clandestine predecessors in costume, has done the one thing Millar deems necessary to inspire a proliferation of superheroes, as well as the supervillains to fight them in sequels....

If Kick-Ass isn't a satire of the superhero genre, it ends up being a sort of tough-love satire of the comics fans whom Millar assumes would be the most-likely candidates for costumed fame. The humor of it comes from our hero's cluelessness, despite years of reading modern superhero comics, regarding the physical prerequisites for masked vigilantism. But like a silent-film hero, through grit and good examples Kick-Ass transcends his ineptitude and ultimately gets to fly and kill people. It's part of the coming-of-age process that encompasses this erstwhile wanker's first sexual conquest after an extreme version of the classic dual-identity dilemma in which the girl admires Kick-Ass but assumes his alter ego to be not a dweeb, but gay. On both levels, Kick-Ass reveals itself as just as much an adolescent gratification fantasy as any conventional comic. The most fantastic concept in the romance plot probably isn't that the girl will sleep with our hero, but that she'll read and admire his collection of Steve Ditko Spider-Man comics.

Taken as it is, Kick-Ass is pretty entertaining and occasionally very funny. The actors handle their chores well, and I suppose I should be glad that the hero wasn't played by Michael Cera or any of the other young actors people love to hate these days. Longtime comic-book fan Nicolas Cage cracked me up with his Adam West impersonation in his Big Daddy costume, while Hit Girl is a sight gag from beginning to end. The action is well staged and the violence is less gruesome than the graphic novel's reputation had led me to expect. There are some really bad CGI backgrounds in certain scenes, but overall the film has the right look that treads the thin line between comic-book visuals and movie world comedy. Kick-Ass is junk-food cinema but for an old comic-book fan it goes down pretty well and it didn't bother me afterwards. That may make it one of the better comics-inspired movies ever made.
Posted by Samuel Wilson at 4:18 PM