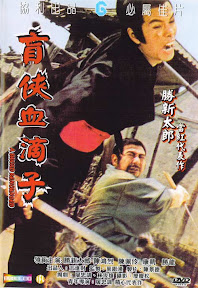 It sounds like an ultimate martial-arts mashup: the legendary Japanese blind swordsman testing his skills and senses against the ultimate exotic weapon of Chinese kung-fu theater. The title alone virtually convinced me to pick up Videoasia's new four-film Wu Tang Protect Ya Neck collection, which brings together movies featuring the infamous head-cutting apparatus. The set comes pretty cheap, after all. I wrote it off to Videoasia's usual slapdash packaging that the star's name was transliterated incorrectly: Shintari Katsu rather than Shintaro. But that should have tipped me off to the truth.

Katsu played Zatoichi, the affable masseur, gambler and master of the cane sword in an official series of 25 films from 1962 through 1973, followed by a television series and a valedictory return to film in 1989. He'd worked with a Chinese martial-arts star when Jimmy Wang Yu co-starred in Zatoichi Meets the One-Armed Swordsman, a rare film in which a Chinese does the job for a Japanese. That was a Japanese film, of course, for Katsu's own production company, but Zatoichi vs Flying Guillotine -- also known as Blind Swordsman's Revenge and A Sword Renowned (or Renounced)-- is a Chinese language film for Chinese audiences. It may never have been dubbed into English; Videoasia's atrocious fullscreen edition carries subtitles. Most importantly, according to most of the references I found online, it's not Shintaro Katsu playing Zatoichi but a lookalike. Several counterfeit Zatoichi films were made as the real Katsu was transitioning to TV. This one in particular, directed by Tao Chung-Fun and written by Lam Gin-Hung, doesn't try to imitate an authentic Japanese Zatoichi film, but adapts the character to a Chinese context. 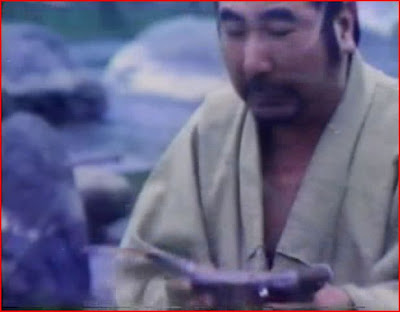 Something's fishy here....
In a typical bit of ethnocentrism, the film informs us that Zatoichi is, in fact, Chinese. Born Wu Ching Hui, he was kidnapped by pirates as a youth and taken to Japan, where he learned his cane sword skills. He appears to be widely known in China by his Japanese name, but as the film opens he is just returning to China to look up his long-lost brother, Tieh Hou. To his dismay, he learns that the brother has been killed in a sword duel with one Chu Yen Jieh. The grief-stricken prodigal blubbers in mourning and vows revenge. 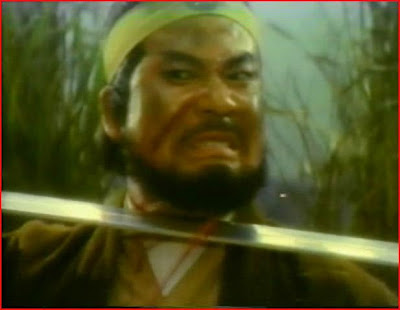 There's one small problem. In the course of an initially incoherent sequence of incidents that opened the film, we've seen this fight between Tieh and Chu. Tieh definitely lost the fight when Chu knocked his sword from his hand. The weapon is just out of reach as Chu puts his own sword to Tieh's throat. But Chu can't bring himself to kill a helpless man and withdraws. Shamed, Tieh grabs his sword and cuts his own throat, leaving Zatoichi's sister-in-law a widow.

Chu renounces "the martial world" and eventually meets up with the widow Tieh. He pays off some brigands who've seized her and her son and gets beat up in the bargain. She befriends Chu and urges him to settle down in her village and become a doctor. He's cool with that, but like a retired gunslinger his presence draws wannabe-badass challengers like Tan Lung, the self-styled "Black Doomsday," not to mention the revenge-minded Zatoichi. Our hero has enemies of his own, however: a shadowy organization that wants him dead in order to reclaim prestige in the martial world. Their agent is Chu Ba, this film's wielder of the Flying Guillotine. They want to eliminate all rival martial artists, so they're willing to let Zatoichi kill Chu before they kill him. Things get more complicated, of course, when Zatoichi finally meets his sister-in-law and is told the truth about his brother's death. He doesn't believe her at first, practically throwing a tantrum of disbelief, but when Chu refuses to fight him things begin to sink in. When Chu refuses to fight "Black Doomsday," however, Tan Lung massacres the monks who've harbored him. That forces Chu to take up the sword once more to avenge his friends, while Zatoichi has a titular obligation to face off against Chu Ba and his wonder weapon.... 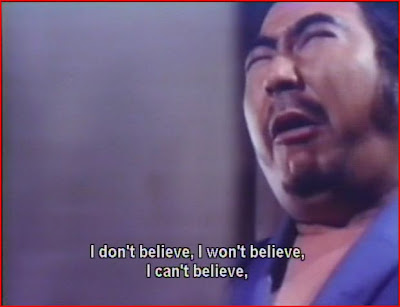 The feeling is mutual, buddy.
For the first 15 minutes or so, Zatoichi vs. Flying Guillotine promises to be the least coherent martial-arts film you might ever see, a jumble of vignettes whose interrelations only become clear later on. The fullscreen presentation doesn't help. Not even rising to the level of pan-and-scan, it often leaves you listening to characters talking somewhere to the left or right of an empty landscape. It's hard to judge the quality of the fight choreography in this format, but it probably wasn't that great. It is interesting, though, to see the Zatoichi character put through the paces of a Chinese martial-arts film. In his native Japan, his fights are done samurai-style; he usually fights several people at once and often dispatches each antagonist with a single stroke of his cane sword. A more protracted duel with the film's villain or some samurai badass lurking in the background is usually saved for the end of the movie. Chinese moviemakers don't seem to believe in the single, neat killing-stroke, so all of their Zatoichi's fights are quite protracted by Japanese standards, and both the blunt elegance of Shintaro Katsu's movements and the invincibility of the Zatoichi character are undercut as a result. The filmmakers in this case also seem to lack confidence in their ersatz hero's ability to carry the film, since his climactic showdown with the FG (as ever, it makes an absurd gunshot sound when used) is intercut with Chu's duel with Black Doomsday. Worse, Chu's fight ends the movie. We never get a farewell scene for Zatoichi, at least in the print used by Videoasia. 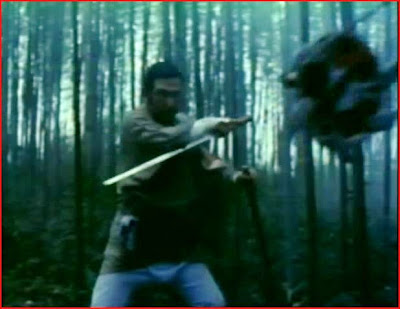 The pseudo-Zatoichi looks enough like Katsu to fool folks, but acts nothing like the original. Shintaro Katsu is a cool customer without being arrogant or aloof. His impersonator emotes all over the place and comes off as a bit of an idiot. It doesn't help that, in contrast with the serious treatment of Chu's storyline, Zatoichi's bits are often turned to comedy, as when he rescues a woman from some brigands early in the picture by slicing off all their belts so their pants fall down. He becomes the butt (forgive the pun in advance) of humor himself when a Chinese kid steals his clothes while he bathes in a stream and for some inscrutable reason demands that Zatoichi moon him. Meanwhile, the actor who plays Chu actually gives a decent performance and arguably steals the film from its clownish star and main character. 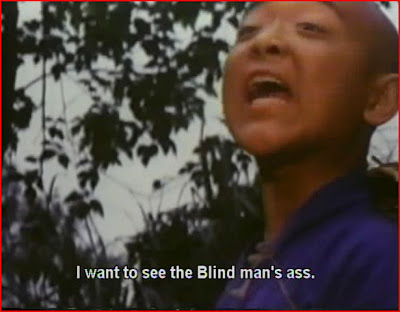 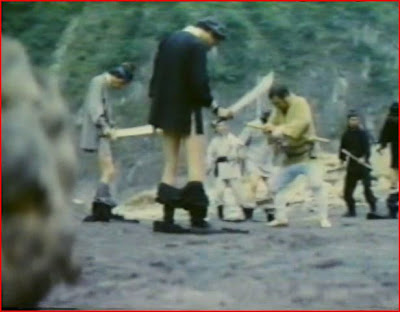 I've worried lately about neglecting the wild side of the world of cinema, but Zatoichi vs Flying Guillotine should start to make up for any omissions. It is a delirious train wreck of a movie, made with only bad motives. It's like a Turkish copyright-infringement film in its brazenness, and I couldn't help but be impressed, in dropped-jaw fashion, by its audacity. This is an awful movie, but I don't regret buying a copy. The mere concept of the existence of such a film entertains me quite enough.

Here's a clip courtesy of Seoulpower1965: