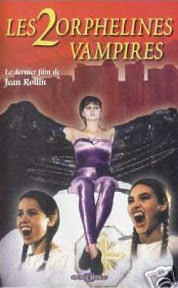 Before this weekend my friend Wendigo had seen two films by French fantasist Jean Rollin: Fascination (1979) and The Living Dead Girl (1982). Based on those he was eager to see more Rollin movies, but those didn't quite prepare him for this relatively late work from the still-active director. He wonders whether the other two weren't really representative, or whether Les Deux Orphelines Vampires represented a more philosophical, reflective turn in Rollin's career. Wendigo was most reminded of the later stories of Ray Bradbury, which he says have the same phantasmagorically reminiscent quality. I've seen some early Rollins, and this one bears some stylistic resemblances to those rather than to his mid-period films, but Two Orphan Vampires definitely has an almost valedictory quality to it, as if he was summing up some of the major themes of his work and taking a final bow. He continues to work and released a new feature last year, but his health was precarious for a while, so his impulse was understandable. 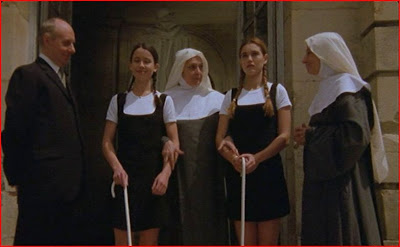 The "Vampire Orphans" is how Louise (Alexandra Pic) and Henriette (Isabelle Teboul) describe themselves, which probably makes for a better, more flattering gang-of-two handle than "France's Oldest Orphanage Inmates." The poor girls may seem a bit old to be under nuns' care, but they were 14-year olds in Rollin's own source novel. Anyway, give them a break: they're blind -- but only during the day. At night, they can see quite well, the color blue especially. They use their talent, in the opening scenes, to romp about a graveyard and drink the blood of a dog. As vampires, they don't seem to have many powers or enhanced abilities. They have few of the traditional vulnerabilities, either, though they can be shot dead as easily as you or me. They seem to remember a past life or lives that they've shared, always together until a "mishap" does them in for the moment. They don't seem to really remember their origins, but they develop an elaborate fantasy of having been Aztec goddesses and glutting themselves on the blood sacrifices of thousands of victims. They also remember visiting New York City, biting a dude on the Brooklyn Bridge, and having one of those "mishaps," though what happened exactly isn't shown. 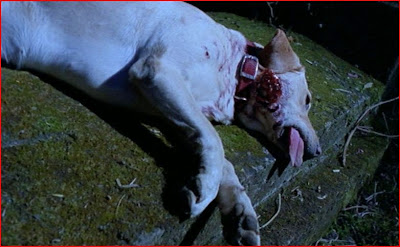 A real gore hound
Help is on the way for our little unfortunates. Dr. Dennary, a leading eye specialist, has taken an interest in their case. He takes the rather extreme step of adopting them so he can study their condition further in the hope of restoring their eyesight. An exceptional aspect of this Jean Rollin film is that their new father's interest in the nubile orphans does seem to be entirely innocent. The erotic is kept to a minimum here, though it's always implicit in the director's fetishistic employment of a pair of heroines. Rollin felt he was toning it down himself, feeling consicous of the girls' ages, but the cast and crew took it upon themselves to tone it down further, pressuring him to cut a scene that would have shown the girls nude in a bathtub. 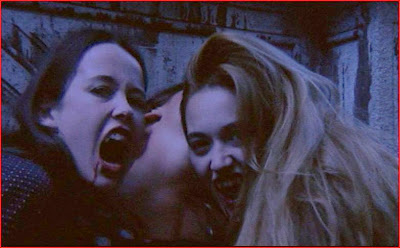 Of course the girls continue their little games in their new homes. When "dad" goes away for a medical conference, they decide to go out on the town, intending to ride the subway while they're at it. At one of their "real homes," -- a cemetery, they attack a robust young woman, but must flee when caught in the act. Seeking shelter unproblematically in a church, they encounter "the Midnight Lady," another sort of vampire who offers them shelter in a coffin for the night. The girls enounter a number of eccentrics over the course of the picture, including a "She-Wolf" with a Noo Yawk accent whose lycanthropy we must take on faith and a "Ghoul" who likes to throw dirt at people. Anyway, the girls barely manage to get home, getting wasted on brandy along the way ("Alcohol isn't as good as blood, but it's stronger," they note). One of the girls has been shot, though, and to save her life her friend spins her most elaborate fantasy yet of Aztec sacrifices. It's just what the doctor ordered, except that the doctor doesn't even know about their dangerous escapade. When he stumbles upon them browsing (remember, he thinks they can't see well at any time) through his prized copy of a Fantomas novel, however, he knows too much. It's time for the Orphan Vampires to move on, with a little quasi-patricide for breakfast. Why they stab him instead of biting him we don't know, but the way they run away from the scene the instant the knife hits home felt authentically childlike, in keeping with Rollin's presentation of his vampires this time. 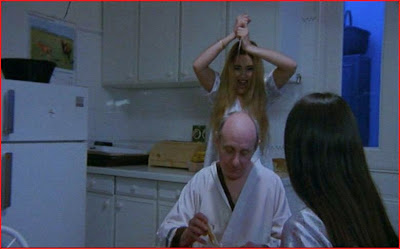 They head back to their old orphanage, where the nuns in charge would have been perfectly happy to have them back except for this business of killing two of the other orphans. They don't have many there to begin with; this is a pretty low-budgeted film. So it's off to the countryside, where they befriend a guileless if not idiotic farm girl who finds the news that she's met vampires simply fascinating. They reward her with a picture book full of old theater posters featuring Houdini and his peers, telling her that she'll find them in its colorful, lurid, exotic illustrations after they leave. This is pretty plainly a message from Jean Rollin to his fans, the picture book showing the childhood sources of his dreams and fantasies, and it manages to be a moving moment despite all the amoral mayhem perpetrated by the girls, for which they are about to pay the price, yet again.... 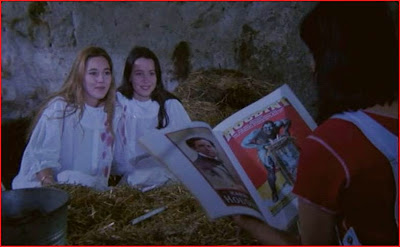 Wendigo isn't sure after the fact whether he can call this a vampire film. The vampires are more symbolic than folkloric; they represent difference, deviance, the outcasts from reality in general. They stand for magic and fantasy and embody Rollin's imagination. Appropriately, the film is really a simple story with some disjointedness and some dream logic. Dreams have their own logic, as Christopher Nolan can tell you, and they always seem logical to the dreamer, even when someone says, "All gods are real because they're imaginary."

One thing Wendigo recognized in common with the other Rollins he's seen is the director's consistent eye for evocative locations. The orphanage is a typically impressive setting, as are the various cemeteries Rollin films in. For budget reasons or otherwise, he shoots many scenes day-for-night, including that odd bit on the Brooklyn Bridge where a painter is trying to work in the middle of the night. Strange to say, Rollin's attempt to tone down the sex element made the few topless scenes look only more gratuitous to Wendigo. The girls' natural charm aside, he thought this effort had all the eroticism of a rotten cabbage. He thinks Rollin should have kept the bathtub scene if only to establish a habit of nudity for the girls. As for the script, we listened to the English dub, so we don't know if the French dialogue is as erratic. In the dub, the girls at one point claim to be Inca goddesses but insist on their Aztec pedigree in every other scene. We also couldn't judge the actresses' natural voices until they did their interviews, at which point they came across as complete bubbleheads.

Wendigo feels obliged to give Two Orphan Vampires a thumbs down, in part because it was too transparently a statement by Jean Rollin rather than a strong story or a compelling set of images. This one is a little too choppy and a little too sloppy to work on all the levels Rollin wanted. Wendigo accepts that this was a very personal project for Rollin, but suspects that the author-director may have been too uncritically close to his material this time. He respects the man's viewpoint, but there has to be something more than viewpoint in a film, and that wasn't quite there this time. But Wendigo will be giving Rollin another try soon, if only because Fiancee of Dracula was in the same box set I got for $9.99 at the local FYE store. Stay tuned.

Don't blink or you'll miss this abrupt excuse for a trailer, uploaded to YouTube by gotohelltown.

Posted by Samuel Wilson at 9:06 PM

I was pleasantly surprised by Two Orphan Vampires. You're quite right about its affinities with Rollin's earliest films, which may have been why I liked it so much.

I've had this flick in my library for quite some time, but haven't yet got round to watching it--not b/c of lack of interest, as I'm a huge Rollin fan, but because I always want to make sure when I sit down to watch one of his films that I will not be interrupted and can give it my full attention--circumstances very hard to come by at this stage in my life, sadly. :P

FIANCE OF DRACULA is another late-period Rollin, and while I liked it a lot, I think it would behoove you and Wendigo to go back a little further and check out SHIVER OF THE VAMPIRES or my personal favorite of his vamp movies I've seen thus far, REQUIEM FOR A VAMPIRE. The visuals in both are stunning, though if story is what you're after, you're bound to be frustrated by either. The story is there, but only in a sideways-glancing way. The real stars are, as always with Rollin, image and light, and the emotional responses thereto.

Watching some of the earlier ones also helps set up the unique visual vocabulary and mythology of Rollin's universe (if I may steal a phrase from my go-to Rollin guide, Tenebrous Kate)--grandfather clocks, skeleton tableaux, etc. etc. Also, REQUIEM has one of my favorite examples of what you called Rollin's "eye for evocative locations," aided by a bit of fortuitous meteorological happenstance that adds up to something great, imo.

Wow, that was a ramble. Time for more coffee. ;)

Sounds like it might be worth at least a watch, but I'm fonder of the vintage qualities of Rollin's early '70s vampire-lady movies.

I might have to watch it. BTW, here's an award for you.