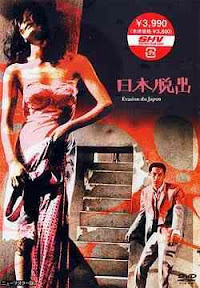 Yoshishige (Kiju) Yoshida's follow-up (not counting a film not included in my new collection) to Akitsu Springs takes the reputed yet globally neglected Japanese master director into genre territory with satirical intentions. Timed to coincide with the Tokyo Olympiad and released on July 4, Escape From Japan can be safely assumed to have something to say about Japan's place in the world and its relations with the U.S. in particular. It also proves less an imitation than a black-comic send-up of the sort of sordid crime stories that Seijun Suzuki and others specialized in.

A characteristic view from the ceiling, repeated often in Escape From Japan.
Escape chronicles the misadventures of Tatsuo Ihara, a small-time criminal who dreams of seeking his fortune away from Japan. I've seen the type before in some of the "Nikkatsu Noir" films collected in a Criterion Eclipse box set last year. While the Nikkatsu protagonists usually yearned to go to Brazil and make a new start through hard work, Tatsuo wants to become a celebrity entertainer in America. He idolizes the Rat Pack and fancies himself a singer in their style. Yoshida portrays a people enthralled by American pop culture, the probably inevitable result of the American occupation. Later in the film we'll see a Japanese woman with a GI boyfriend cajole a black GI into doing a Harry Belafonte impersonation. At the same time, Japan is celebrating its restoration as a respectable nation by hosting the 1964 Olympics. By doing so, are they reasserting their own autonomous identity or is this another instance of aping the West or angling for its approval? Yoshida doesn't exactly take a stand one way or another, but by having Tatsuo eventually intrude on the Olympic celebrations he does seem to be raising the question.

Tatsuo's initial concern is with helping his cool drummer buddy Takashi rob a Turkish bath in Tokyo's Shinjuku district. It's an inside job; Takashi's girlfriend Yasue works there. They take a tough guy along who proves the only competent member of the gang, since Tatsuo's a nervous novice and Takashi proves a hopeless drug addict who passes out in the middle of blowtorching a safe. They still manage to escape with the swag, but not without taking a cop on an unwanted ride that ends with a bullet.

The tough guy thinks that Yasue might squeal now that murder's involved. He wants to kill her by forcing her to OD on sleeping pills, but not without raping her first. While Takashi staggers about Tatsuo screws up the courage to save Yasue by shooting the tough guy. After leaving Takashi to dry out with his share of the loot, Tatsuo, now one of Japan's most wanted, goes on the run with Yasue in search of a way out of the country. She has a friend -- the woman with the GI boyfriend, who occasionally smuggles emigrants onto military planes. Because a lot of Japan-US flights are tied up during the Olympics, the best that can be arranged is a flight to Korea. Tatsuo briefly shares a meat locker with a Korean who wants to go to "the people's republic" -- that's North Korea, folks, -- and doesn't want a thug like Tatsuo defiling any of his sacred soil. Tatsuo luckily wanders away before the MPs raid the locker and hooks up with Yasue again. Before long, she loses the rest of their money somewhere on a golf course and gets arrested trying to retrieve it. Finally, Tatsuo sees no way out, as a fugitive, other than appropriating Japan's most public occasion by hijacking a radio truck covering the Olympic torch run. Before he realizes that the intrepid reporters have kept their mikes running, he tells the world of his motives, sneering that Japan doesn't interest him. Now more of a cop magnet than ever, he has one last run to make to the harbor if he hopes to escape from Japan....

Escape is an anti-crime film, not because Yoshida makes any effort to preach against crime, but because he portrays his criminal characters as anything but cool. Tatsuo is an idiot and a crybaby, delusional about his musical talents and constantly protesting his innocence. There's nothing glamorous about his exploits, including his murder of a yakuza by the exact method from which he saved Yasue: forcing him to chug sleeping pills. Because movies so often (or too often, depending on your attitude) portray criminals as cool rebels, a film that portrays its criminal protagonist as a hysterical wretch can't help but seem like a parody. Whether Yoshida was consciously parodying Nikkatsu noirs or Japanese crime films in general, he clearly did intend to make a kind of comedy. The comedy consists a little too much of people screaming for my taste, but there is a more substantial satire of an inanely Americanized Japan, against which Yoshida contrasts, in bookend sequences, the abstract art of painter Taro Okamoto. Similarly, the score is shared by the banal American-style pop music Tatsuo loves (apparently composed by Masao Yagi) and the astringent, portentiously modernist sounds of Toru Takemitsu. The juxtaposition of musical styles is effective, but the paintings look more like a way to maintain Yoshida's "Japanese New Wave" credentials.

Samples from cinematography by Toichiro Narushima.
I was entertained by the satire and by Yoshida's stylish direction, but I don't think his heart was in this film as much as it was invested in Akitsu Springs. From what I've read, Escape suffered from studio interference that prodded Yoshida toward independence in the future. Looking at the films to come, there are a lot more intense-sounding romances (including a version of Wuthering Heights) and few if any crime films. As a crime film, Escape doesn't surpass the best of the films it satires, but it does build up the case for Yoshida as a director we should know more about.

Maybe you'll get a better idea from this trailer, uploaded to YouTube by TheAsianVisionS:

Well Samuel, this particular film is one of the few in the Yoshida collection I haven't seen yet, but I plan to remedy that slight very soon. I kind of expected this reaction though, as I was looking at this as in all probability a lesser Yoshida. You confirmed this by opinining that Yoshida's heart was not invested here, and even the narrative summary is nothing special. Yet, several other Yoshida's in my view merit masterpiece status:

An Affair in the Snow
Farewell to the Summer Light
Eros plus Massacre
The Affair (a.k.a. Flames of Love)
A Promise

while 'Confessions Among Actresses' pushes very close. I am not the fan of 'Wuthering Heights' that Allan is, but let's see where you stand, as your appreciation for quality epic cinema is renowned.

Sam, the crime element attracted me to this one because I could compare it to the Nikkatsus I've seen. I propose to march through the filmography in chronological order, as best as I can construe that from IMDB, so that means A Story Written in Water is next. From what you write, I should be getting into his peak period shortly. Thanks for the advice and support in this project.

Samuel, it seems as though you and I had the same game plan with the Yoshidas (which I also generously received from Sam). I'm watching them chronologically as well and saw "Escape from Japan" last week. I may have liked it a little more than you, but I do agree with the screaming. There was A LOT of screaming and that could get a bit grating. But from what I've seen in "Akitsu Springs" and this one (though I didn't really love either), I am really looking forward to the rest of these movies. If this is what Yoshida was doing in the beginning of his career I am anxious to see what he does later. Every shot is sumptuously composed and framed and the mise-en-scene is intriguing. I'm looking forward to what you have to say about the rest.

Jason, I've found that there tends to be more screaming and crying in Asian crime/action films than in their American counterparts. To an extent I appreciate the sense that people really feel pain or terror, but Escape takes it overboard, perhaps because Yoshida is satirizing the whole genre. There's a lot to like in this film, but Yoshida's main point (Japanese are in thrall to American pop culture) is too easily made, and that makes the satire as well as the crime elements seem halfhearted. It does look fine, though.