Wendigo Meets AGAINST THE DARK (2009) 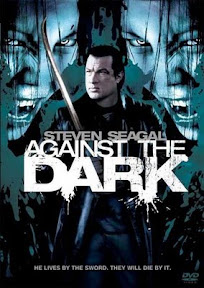 Our quest for novelty has burnt us once again. Once more my friend Wendigo and I opted to try something that neither of us had seen before, something that just happened to be on TV (on the increasingly misnamed Sleuth channel) on our normal vampire-watching day. We have to admit that we didn't exactly have high hopes about this one, but we thought that at least this would be a "vampire" movie that bucked the current trend toward dreamy, misunderstood bloodsuckers and featured a genuinely loathsome, repellent monster. And to an extent we were correct. 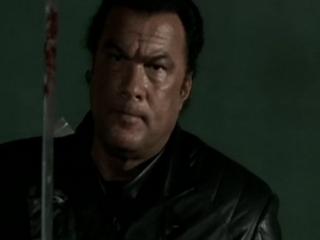 Guess what? It had vampires, too -- sort of. Well, they're infected humans (Wendigo suggests, "zombie vampire creature infected things") with a "relentless quest for blood," but they have a sloppy way of getting at our precious blood that looks suspiciously like a zombie attack. At every opportunity this picture shows us flashes of grimy hands fondling entrails to a soundtrack of grunting. Anytime an infected one pounces on our protagonists, we get a subliminal moment of fondling entrails, plus grunting. The grunting and entrail fondling is also used occasionally as a bridging device between scenes. It all made Wendigo very skeptical of the alleged vampirism of the infected, which is claimed for them by the publicity for Against the Dark and by some characters in the film. I asked him, "What do they need to do to be vampires?" and he answered, "Actually, they need not to act like zombies." Some of them do seem relatively vampiric insofar as they drink blood without necessarily fondling entrails or grunting. We see an infected female diligently filing her fangs before she cuts a dangling victim's throat to fill her "I Hate Mondays" coffee cup. We expect to see more of her, possibly as a head vampire later in the picture, but while she does reappear, it doesn't amount to anything. She doesn't fight Steven Seagal and we don't even see her destroyed - - or at least neither of us recall seeing it. But that's par for the course for a film that doesn't seem to know how to build up a villain. We get introduced to a mad doctor who's kept himself alive by feeding victims to the infected. He looks like a big bad but Seagal promptly dispatches him. We see another bloody fellow who announces that his kind have "evolved" so that we humans "are just cattle to us." He boasts of his intellect and cunning, but is last seen running straight into shotgun fire.

There is nothing psychologically or folklorically vampiric about the infected wretches of Against the Dark. For that reason, Wendigo has practically nothing to say about the movie. He'd like to insult Steven Seagal (who wouldn't?) but the great man is actually in it so little that he's almost an elusive target. He's the head of a small group of "hunters," military-trained swordfighters (?) dedicated to eradicating the infected and rescuing human survivors. Seagal favors the katana these days because he can pretend to kill people with a single stroke at a time. He may have a hard time moving the rest of his body beneath that possibly form-fitting trenchcoat, but he can still sort of swing a sword. Otherwise, to describe his movements as lumbering is unfair to lumber.

His subordinates have even less personality than Segal does. The females don't even have dialogue. They march back and forth in front of the hospital, and we mean this literally. In one scene they walk from left to right and Seagal says, "Clear out dat area." A few minutes later they walk from right to left and Seagal says, "Clear out dat area." They appear only sporadically through the first hour of the film, leaving us to attend to two small bands of survivors who eventually join forces and the army guys (led by Keith David) who argue interminably over how soon to bomb the hospital or how long to wait for the hunters to flush out the survivors. When they finally hook up with the hunters, Seagal gets a belated (but no less pompous for all that) introduction, announcing, "My name is Tao." Cue the bombastic rock theme. His name is all you need to know about him. As for his motivation, as he explains: "Well, da thing of it is, we have to do what we do." And who's going to argue with that? Instead, let's argue with the hunters' rescue technique. Once they find the civilians, they acquire a habit of sort of wandering away to leave them helpless and alone again. But at one point Tao hands someone a gun, explaining, "Dis is a 9 millimeter automatic. It fires quick, so don't spend it all in one place." Fortunately, just about anything and anyone can kill a "vampire" in this picture. At one point, a frail female practically strangles a bloody-mouthed attacker before flinging him to the floor and stomping him to death. Like zombies, these vamps have to swarm on you or pretend to be innocent little children in order to have a chance against people.

After the fact, Wendigo thinks the basic story is a rip-off of that more prestigious original screenplay, House of the Dead 2. That one had characters fleeing from infecteds through a hospital threatened with carpet bombing, but unlike Against the Dark, its sets were actually dressed to resemble a hospital. Wendigo used to work in a hospital, so he noticed instantly the complete absence of signage in this film's alleged hospital set. On the other hand, the Against the Dark hospital had a storeroom full of mannequins. Beat that! Better still, the hospital was so cunningly designed that all the hallways lead to the same exit. We're assured of this constantly. Does that mean that you can reach the exit by walking in any direction? It must be so, because we could never keep track of where our little band was in the building, yet they got out eventually. We had a hard time even keeping track of who the characters were. This is one of those films that throws several groups of people together, none of whom introduce themselves to each other. It's those little things whose absence makes you realize that this is something special.

The dialogue redeems the film. It gave us something to laugh at. I enjoyed one character's ten-second gloss on I Am Legend, apropos of what? "We're the monsters now," she says, "This isn't our world anymore." I can see why she'd feel that way with Segal around, but this was before she met him. At another pessimistic moment, a character opines: "Nothing will ever be OK again -- or the same." And along the same lines: "You know what I was just thinking? Same thing I always think about: what are we going to do?" We were wondering the same thing a lot during this picture. We were never so grateful for commercial interruptions, and Wendigo in particular was glad for the first time in his life that a film had been edited for content. Anything that meant less of the movie was cause for joy.

How bad is Against the Dark, really? Wendigo says it's as bad as some of the vampire comedies we've seen. Consider yourselves warned.

If this isn't warning enough, examine this trailer, uploaded to YouTube by kotegashi.

Let that be a lesson to you. If it bears the words "Stephen Segal" anywhere in the credits, it is bound to be worthless.

Well, we didn't expect anything of Seagal. We were just curious to see the take on vampires in a film where the hunter would indisputably be the hero. Unfortunately, what we got hardly amounted to a "take." The way to keep people from rooting for the vampires in a film with Seagal as the vampire hunter is to make them as boring as he is. In this, the makers of Against the Dark succeeded.