In Brief: PERCY JACKSON AND THE OLYMPIANS: THE LIGHTNING THIEF (2010) 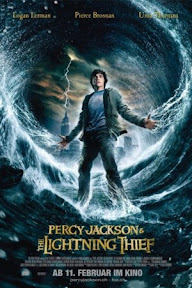 It's a Chris Columbus film, so it can't really aspire to be more than competent. In many ways, this adaptation of a popular children's book series is an utterly generic special effects fantasy. It certainly wears the Harry Potter influence most obviously in the concept of a training camp for demigods, though we learn very little about its rules and rituals from this would-be tentpole of a would-be series. The hero, I understand, has been aged from his original form so he could be sold as a hottie, and he is played by a blandly handsome young man. He's seconded by a blandly handsome young woman and a blandly humorous young black man, the latter perhaps unfortunately cast as a satyr. They could all have been more forceful (especially since the girl is supposed to be a mighty warrior) and funnier. Percy's early exasperation at the outlandishness of his situation is quickly set aside, and the movie suffers for it. There's a mystery, but the solution leaves a "who cares?" aftertaste since the ill-concealed villain of the piece is as bland as the heroes and declares his motivations as if reading a press release. If he's the "big bad" of all the books then I doubt I'll miss much if there are no more movies in this series.

I've described a pretty mediocre movie, and that's what The Lightning Thief is, but I hasten to add that, as a doorway to Greek mythology and a hint of its wonders, Columbus's movie hits the Clash of the Titans remake with both a lightning bolt and a water tower and dunks it in the river. Percy Jackson still falls short of the ideal in some respects; like Clash, it shows us the Olympian pantheon but neglects to identify most of them, and there's clearly an urge to make poor Hades a Bad Guy in a way he really wasn't in his own time. But in happy contrast to the "divinity sucks" attitude of the 2010 Clash, Percy is unashamed of indulging in fantasies of power and the heroic things that can be done with it. It may not be profound to observe that being a demigod could be cool, but if you're making a film with one as your hero you could draw worse conclusions, as has been proven this very year. I'll concede that Clash has the better action scenes, but without the right spirit encompassing them they aren't enough for me to recommend that miserable film. Whatever Lightning Thief lacks, it has the right spirit for the sort of story it wants to tell. I can state one thing for certain: this is not the worst film of 2010.
Posted by Samuel Wilson at 6:10 PM

I rather enjoyed it myself. I didn't find it as bland as you, but then again, I've been viewing some truly wretched films of late (16 Tongues anyone? Princess of Mar?) I do agree it was far better than Clash, which probably should have been entitled "Trash of the Titans", since our would-be hero is little more than trash.