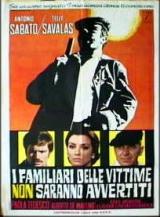 Italians loved to put long titles on their movies back in the day. The original tag for this Alberto de Martino film is I familiari delle vittime non saranno awertiti -- "The families of the victims will not be notified." It didn't reach the U.S. under its present handle until after Telly Savalas had become a TV star on Kojak several years later. Earlier in the decade he was doing a lot of interesting or at least eccentric work in Europe, from the flamboyant Cossack in Horror Express to the title psychopath in Redneck. Here he plays what would eventually become the title character in a story about the yearning for family and the related obsession with betrayal and revenge within the Sicilian Mafia.

Antonio Sabato the Elder is the actual star of the picture. He plays Antonio Mancuso, a young man who grew up outcast in the underworld because his father had been whacked for being a traitor. He's desperate for acceptance by a mafia family, but when he finally gets an opportunity he grows suspicious. He's ordered to kill a man who just happens to be the person who denounced Antonio's father years ago. Antonio figures out that the target's actual enemies want to hide their hand and blame the killing on Antonio's own urge for revenge. It would be better for them if Antonio were killed after doing the deed, but he outsmarts his employers and gets paid before leaving the country for Hamburg, where his brother Nicola has been operating as a pimp.

The Mancuso brothers aspire to more honorable work, but how do they earn their way into the orbit of Don Vincenzo (Savalas), who runs the local mob? They come up with an elaborate scheme to trick some of Vincenzo's drug runners, stealing their drug bag and replacing it with a duplicate, "losing" that in a police chase, and then "retrieving" the real bag and returning it to the Don at his estate. Vincenzo sees no reason to befriend Antonio, and slugs him when the upstart insults his underlings, but his gut feeling tells him to trust the young man and bring him and Nicola into the family.

The brothers do a lot of dirty work for the Don, including delivering one offender to a soap factory to be sent home to his mother by the bar, but they feel like men of respect at last. Antonio's family ties promise to grow closer as he falls for Vincenzo's niece Monica (Paola Tedesco), an insolent young woman who openly defies her guardian and even snatches cigarettes out of his mouth. We learn that she bears her uncle a grudge because she blames him for the death of his brother, her father. Antonio responds to her vengeful spirit, fends off her attempt to flog him, and has his way with her, crowing that they share the same blood. It doesn't seem like the thing to say to a woman you're screwing, but he doesn't mean it that way.

Paola Tedesco and Antonio Sabato in post-coital conversation
Don Vincenzo has a bad heart and it seems to be making him behave erratically. The other European bosses become convinced that keeping him in charge in Hamburg is bad for business. Despite Antonio's warnings, Vincenzo insists on doing things his way. Determined not to be a betrayer, Antonio convinces himself that Vincenzo is the real traitor to the organization and agrees to plot his destruction. Monica betrays Vincenzo by revealing his location in a private hospital, and Antonio and Nicola hijack a Feuerwehr ambulance to storm the facility and take out the Don. In the end, Antonio will lose one family and gain another, but the film concludes on an abrupt note of uncertainty about his future and his need for children to avenge him just in case....

Compared to de Martino's crazed Canadian crime epic Shadows in an Empty Room, Crime Boss is a temperate if not tepid film. It never goes over the top, but as a character-driven film it doesn't really need to. De Martino and Lucio Battistrada's story's major flaw is its overstatement of the relationship between Sabato and Savalas. When the latter, cornered and about to die, tells Sabato that he loved him like a son, and Sabato cries in reply that "I loved you too!" we haven't really seen much in the film to prove these claims. Most likely de Martino needed such a scene to sell the parallel between Sabato as a reluctant betrayer of a father figure and Paola Tedesco's Monica as a ruthless betrayer of blood kin. Tedesco, whose career began as Pier Paolo Pasolini's Salome in The Gospel According to St. Matthew, steals the picture as a sexy schemer with a frustrated lust for power. If she had only used a gun she could have earned admission into the international Seventies pantheon of amazons and valkyries. By comparison, Savalas gives a relatively restrained performance by his Euro standard, while Sabato is acceptable but not compelling as the antihero. Francesco de Masi contributes a likable score, and the film is full of (for me) fascinating footage of Rome, Hamburg and other points of interest.

On a stylistic note: Now that's a jump cut!

A public domain item in the U.S., Crime Boss is available in several cheap packages. It can be found in VideoAsia's Thug City Chronicles collection, along with several superior Euro-crime items, but Mill Creek Entertainment's version in its Suspense Classics collection is preferable for being letterboxed, though it starts the film in the middle of the opening credits, leaving out the actors' names. I familiari delle vittime lacks the intensity and panache of the most entertaining crime movies from the place and period, but it has just enough story to hold your attention for an hour and a half that passes easily enough.
Posted by Samuel Wilson at 10:12 PM

How is it almost none of the movies that you review have been watched by yours truly?!? As a result, though you drop by at my blog from time to time and post your valued opinions there, I hardly ever manage to reciprocate the same :(

Got to agreed with you: great title (in the original Italian), fairly average movie, awesome femme fatale.

I agree with everything here, Sam. Sabato was a bit better in THE LAST DESPERATE HOURS and Lenzi's MILANO ROVENTE.

I much prefer De Martino's more obvious GODFATHER clone, IL CONSIGLIORI aka THE COUNSELLOR with Martin Balsam and Tomas Milian. The Ortalani score is really nice, too in that one.

Shubhajit: It's probably because you have better taste than I do, or at least more discrimination when selecting films to watch. But sometimes I'll watch a film so you won't have to :)

Neil: Paola Tedesco doesn't seem to have had much of a career, and her contribution to Crime Boss makes me regret that. Her role elevates an otherwise average film.

venom5: Balsam, Milian and Ortolani mean I'll have to track down The Counselor I wonder whether De Martino had already seen The Godfather while making Crime Boss. There's a great shot near the end when Monica smugly closes the doors to a mafia conclave behind her -- to exclude them from her power, it seemed -- that looks almost like an answer to Kay getting the door closed in her face in the Coppola film.