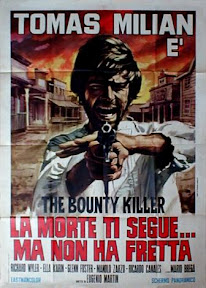 Directed by Eugenio Martin, perhaps best known for the immortal Horror Express, this adaptation of a western novel is a milestone in the spaghetti/paella western genre as the first appearance in said genre of the redoubtable Tomas Milian, here playing the villain in much the manner he employed in the police films of Umberto Lenzi and others during the 1970s. El Precio de un hombre (released in the U.S. in 1968 as The Ugly Ones) is also a textbook example of some of the qualities that set the Euro westerns apart from their immediate American predecessors, the "adult" westerns of the 1950s. The Bounty Killer is out to debunk the myth of the noble outlaw, the "social bandit" of the Jesse James archetype. James is cited by some of the characters in Martin's film as an example of the sort of misunderstood criminal Jose Gomez (Milian) is. Those characters are the people of a very small town where Gomez grew up as the playmate of the now-beautiful Eden (Halina Zalewska aka Ella Karin), who has aided him in an escape from the law that turned into a massacre. They remember when Jose was a genuine victim of unfair circumstances, and they defend him, argumentatively and literally, against the title bounty hunter, Luke Chilson (the late Richard Wyler). Chilson warns them that the Jose they knew is long gone, replaced by a vicious, cold-blooded killer. They pay a high price for failing to heed his warning. 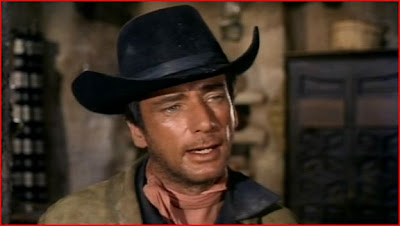 Richard Wyler is The Bounty Killer. Tomas Milian is the killer bounty. 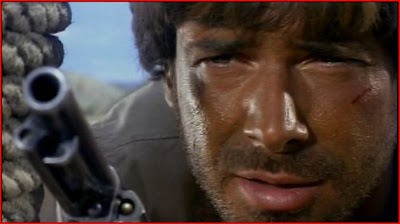 Fifties Westerns were distinctive in their time for rejecting the white hat/black hat dichotomy of B films and singing cowboy vehicles in favor of ambiguous antiheroes and charismatic, nearly sympathetic antagonists. The idea often was that only a fine line of ethics separated a Jimmy Stewart or Randolph Scott, to take the best examples, from their various antagonists. What made a villain was a certain ruthlessness, a readiness to take steps the heroes wouldn't, but that ruthlessness didn't seem to make those men evil. In a way, spaghetti westerns brought evil back into the picture without restoring the good. The way they brought back evil was by enhancing the villains' cruelty, the pleasure they took in tormenting victims. These are the qualities his erstwhile friends discover in Jose Gomez once they make the mistake of helping him defeat Luke Chilson.

Jose seems to defer to their sentiment by refusing to kill Chilson, but that reprieve only gives him ample time to torture his enemy. Meanwhile, his gang converges on the village as a new base of operations. Requiring secrecy, they murder a young man, no friend of Chilson, who decides to leave town. Needing funds, they finally decide to loot the place, while Jose mockingly promises his victims that he'll pay them back after robbing a bank in Mexico. By then, fortunately, Eden has wised up enough to free Chilson at night so the bounty killer can come storming back in to annihilate the Gomez gang, with belated help from the community. 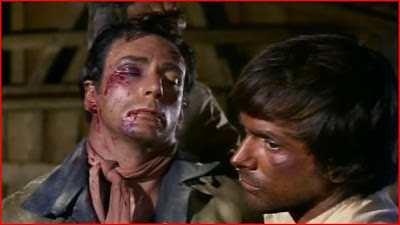 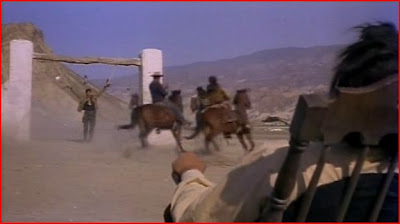 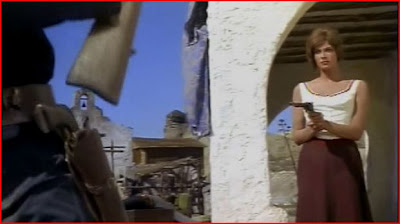 Wyler, a former Hollywood contract player working in Europe under another name, is a living license for Milian to steal the film. Director Martin lets Milian rip as the Cuban-born onetime glamor boy works himself into the grotesque mode he'd perfect in Lenzi's cop films. He keeps his handsome looks, the better to be seductive with Eden, but makes a beast of himself with drunkenness and depravity. Martin also indulges him with a remarkable death scene, giving Milian a huge close-up as he breathes his last into the dirt, setting the dust aswirl with every gasp.

Judging from Videoasia's halfway decent widescreen copy of the film (apparently taken from a Spanish DVD with a English dub option) in its The Fast, the Saved and the Damned collection, Bounty Killer is well photographed in picturesque (albeit often un-American looking) locations. Stelvio Cipriani contributes an erratic score that has a little too much pop-art flavor for my taste but is often effective anyway. I shouldn't overstate the cruelty of this film in terms of violence; it doesn't really go in for gore, but pushes the idea of Jose's cruelty to the forefront of our attention. Audiences in Italy, Spain and beyond clearly responded to spaghetti cruelty. Maybe many of them still felt something like the exploitative cruelty shown in El Precio in their daily lives. Whether they did or not, they seemed to have little patience for the fine but crucial distinctions drawn in American westerns of the period. The more I see Fifties westerns, the more things seem missing in the spaghettis, but the Italians and Spaniards brought new things to the table, including a sensationalistic visual sense, that give their westerns distinctive qualities that make movies like The Bounty Killer still worth seeing.

Here's an Ugly Ones trailer from United Artists, uploaded to YouTube by SWDBTrailer:

Posted by Samuel Wilson at 5:32 PM

Maybe I need to sit down and watch this one again. Everybody seems to like it but me!

venom, it's no classic but I happened to see it at a moment when I was questioning the point of spaghetti westerns, and Bounty Killer clarified things for me a bit. Wyler's a stiff but I think the film survives his failings.