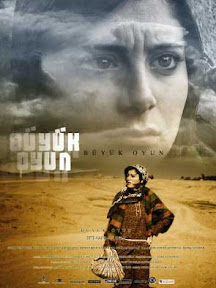 The blurb on the box cover claims that Atil Inac's film "Plays like Hurt Locker from the opposite vantage point." However attractive that comment may have seemed to Vanguard Cinema, the distributor of the DVD, it misrepresents the film, which portrays a woman caught between the two fires of American occupation and jihadist terror. In war, contrary to what some may believe, there can be more than two sides.

Filmed on location in the Turkmen and Kurdish regions of Iraq and in Turkey, Buyuk Oyun is the story of Cennet (the name roughly rhymes with "Jeanette"), a young Turkmen woman who takes a lucky trip to an outhouse just as an American unit rolls into her village and shoots up her family. This is as much as we see of the Americans in the film, and they're shown as blunderers rather than villains. Nevertheless, Cennet bears a grudge. Her first priority, however, is to go to Kirkuk, where her one remaining brother works at a barter mart. 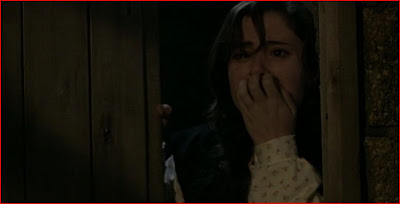 After the horrors Cennet (Suzan Genc) has seen, moving on isn't as easy as it looks. 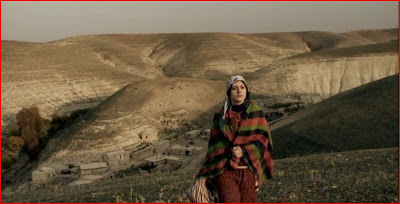 In Kirkuk, Cennet learns that her brother was injured in a terrorist bombing and airlifted to Turkey for specialized medical care. Without a passport, she resolves to cross the border to find her brother. She entrusts herself to a group of smugglers ("bandits" from a more skeptical perspective) and gets raped for her trouble. Despairing and dishonored, she tries to kill herself by jumping off a cliff into a river, but she's fished out by good samaritans who finally get her into Turkey. She ends up in the tender care of a jihadist cell led by a goggle-eyed fanatic. He promises to inquire about her brother, who had been transferred to an Istanbul hospital, but blatantly lies to her, telling her without checking that the brother is dead. He quite consciously wants to mold her into a suicide bomber, cynically describing her and another woman as "lambs" who'll make quite a show by blowing themselves up simultaneously. This sets up the sort of suspense we've seen before. Will Cennet go through with the bombing? Will her suicide vest function or not? Will she manage to encounter her brother and learn the truth before she throws her life away? Without spoiling too much, I'll say I was favorably surprised by the lack of resolution at the end of the picture. 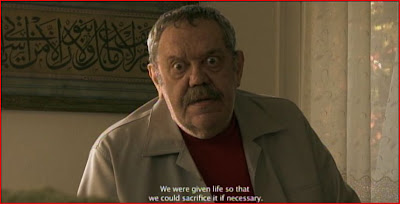 If sacrificing one's life is such a great thing, how come guys like this never do it themselves? 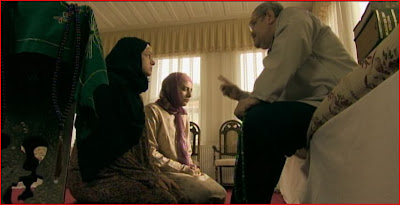 Atil Inac and co-writer Avni Ozgurel clearly oppose both the Americans and the jihadists. Their sympathies are with the simple people caught in the middle, whose lives are likely to be made no better no matter which side wins. While the jihadist leader is clearly the main villain of the piece (and his final scene raises questions about possible ties to the U.S.), Buyuk Oyun uses Cennet's odyssey to put a human face on a suicide terrorist. She is no Islamist. She isn't out to conquer the world in the name of a Caliphate. She doesn't hate anybody's freedom. But she's angry and vengeful and, most importantly, believing her brother dead, she has no family and thus, to her mind, nothing to live for. That detail may illustrate a significant cultural difference between Iraqis and Americans. We might expect an American so victimized and isolated to grit her teeth, start over and find her own place in the world. Cennet doesn't seem to believe that she has her own place as an individual; without her family, and without honor after the rape, she feels that her life means nothing and may as well be given up in some meaningful way. She thinks differently by the end, but her experiences have alienated her to the point where she seems to be more isolated, more alone than she really is. 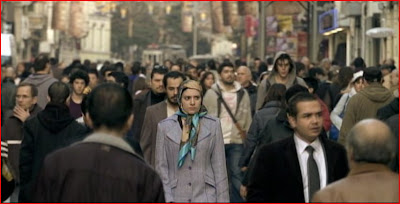 Suzan Genc made her movie debut playing Cennet and makes a sympathetic impression. As a director, Inac has a strong eye for the landscapes of northern Iraq, but some montages seem padded to accommodate Sabri Tulug Tirpan's score. He opts for some narrative telescoping through montage that throws away some strong opportunities for drama, especially when we get to Cennet's indoctrination into jihadism. Inac may simply have been careful to avoid having Cennet espouse opinions that might lose her audience sympathy. As for the audience, Buyuk Oyun did the festival circuit before opening in Turkey earlier this year, and apparently hasn't played theatrically in the United States. One scene in which Cennet goes topless to apply dye to her breasts, out of fear that her explosion might expose naughty fragments to unwanted eyes, makes me suspect that Inac's primary audience is the global art-house crowd rather than the Turkish public. At the very least I'd bet that that scene isn't playing in Turkish or Iraqi theaters.

A Step Into the Darkness isn't the first suicide-bomber movie from a Muslim filmmaker and isn't necessarily the best one. But the setting and the story make me want to recommend this film as something like a moral imperative to those who still wonder why some folks in the Middle East have bad intentions toward Westerners. I consider myself fortunate that the Albany Public Library acquired the film. More libraries should do the same.

This English-subtitled trailer was uploaded to YouTube by tftyapim.

Posted by Samuel Wilson at 9:37 PM

I saw the film in Turkey and they did show the bare breast scene - but it was her companion that was bared and cennet was painting them black. How did you miss that?
You lose the bet.
I disagree with your analysis - she was so traumatized by events she didn't speak. - You missed the point.