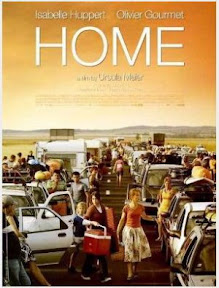 Ursula Maier's movie takes a Francophone family from one extreme of freedom of space to another extreme of self-imposed confinement. Mother, father, young adult daughter, teenage daughter and little boy live happily in a house by the side of an abandoned stretch of highway. The road, on which work hasn't been done in ten years, is their giant backyard, a place to stick excess stuff, to play roller hockey on or plant the TV to watch shows under the stars. Their idyll ends abruptly when work at last resumes on the road and it opens to traffic at last. For the younger kids, crossing the road to go to school becomes a dangerous challenge. The lazy elder daughter is ogled by drivers as she continues her daily routine of sunning her bikini-clad self on a lounger and listening to death metal. The sensitive, brainy younger daughter becomes obsessed with the effect of toxins spread by passing cars. The noise of burgeoning traffic grows ever more intolerable. 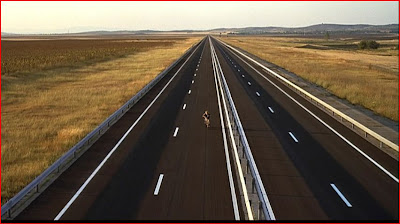 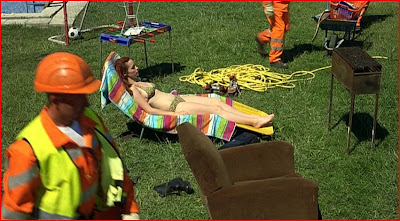 Gradually the family retreats deeper within their house, except for Judith, the elder daughter, who simply disappears while Mom (Isabelle Huppert) takes the younger kids on a picnic during a giant traffic jam. Dad (Olivier Gourmet) can't take it anymore and wants to move out, but Mom is too attached to the house. After a harrowing fight, Dad gives in, but not without turning the house into a bunker, fortifying his family against the outside world with cinder blocks and insulation. Once they're shut off entirely from the outside world the remaining family seems doomed to madness and death, but they have one link left to life that may save them.... 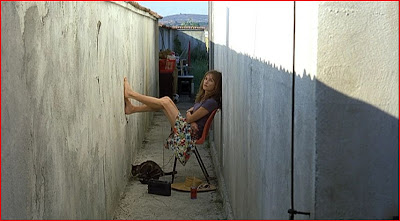 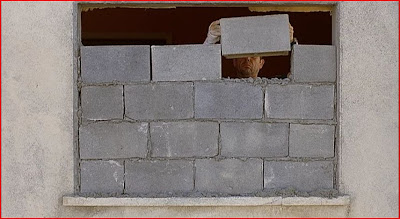 At first, the family seemed like a pack of Capra-esque bohemians, somehow property-owners and squatters at the same time. It was almost utopian for a while, though their lifestyle clearly depends on Dad's job. Mom's happy to be a housewife, and no one holds it against Judith that she has no interest in getting a job. The family's nearly too intimate by American standards, especially in the bathroom, and I couldn't help wondering whether Maier meant us to see them as an ideal family or as eccentric in the first place. Should we see the government reclaiming the highway for its proper use as a cruel invasion of the family's space, or should we see their determination to make their stand on untenable ground as proof of a collective insanity. Is there a moral here about the amount of space a family needs, or the depradations of modernity, or are we looking at a tragicomic study of a problematic household? Maier's high concept is at cross purposes with the fine performances with which the actors create plausible (and then plausibly disturbed) three-dimensional characters, and the tone shifts drastically from droll comedy to something close to horror. Despite the presence of a lot to like in this picture, including the art direction and the cinematography by Agnes Godard, Home ends up (for me) not quite satisfactory as either satire or character study. The ending definitely didn't help. But it is well-acted enough and well-made enough pictorially that I can imagine other viewers liking it better than I did.

Posted by Samuel Wilson at 8:52 PM

Trying to find your email address. Can you drop me a line? mwhite at impossiblefunky dot com (beware my wicked spam filter).