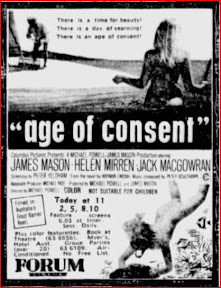 There's a new movie of The Tempest coming out this fall. The gimmick is that Prospero will be played by Helen Mirren. In this age of inclusive casting, I say: Why not? I expect that when the film comes out, someone will find it ironic that Mirren took the part, given that she made her film debut in a movie some believe was inspired by the same Shakespeare play. Of course, it seems sometimes as if all you need to do is make a movie with an old man on an island and someone will say it was inspired by The Tempest, especially if it comes late in a filmmaker's career. Age of Consent was Michael Powell's final feature film, and the director is arguably more of a Prospero figure than the painter played by co-producer James Mason. Powell found himself in Australia after the British film industry effectively blackballed him for making Peeping Tom in 1960. Exiled from the studio resources that had made his great collaborations with Emeric Pressburger possible, Powell had to find ways to make magic on the cheap. That he succeeded doesn't make Age another Tempest. At least it's less interesting to me as a variation on Shakespeare than as a variation on Powell's own past work. 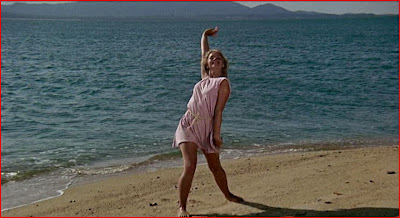 Mason plays Bradley Monahan, an abstract artist who can't stand to see his works treated like commodities in a New York gallery. He flees to his Australian homeland, to a little island near the Great Barrier Reef, in search of solitude, excepting his dog Godfrey. He gains fresh inspiration after encountering Cora (Mirren), a feral teenager who catches crustaceans to sell to local grocers. Cora toils for her wicked grandmother, but is saving some money of her own to move to Brisbane on in the hope of becoming a hairdresser. Bradley is a new customer, the proceeds from whom Cora can keep completely from the drunken hag of a grandma, but when the painter deduces that Cora has stolen someone else's chicken to sell to him, he suggests a more honest way of making her living: posing for him. While he doesn't seem to have done figurative art before, Cora stirs new creativity in him, and his artistic appreciation of her budding body makes her aware of her awakening womanhood. Others have been aware of it already, but she knows how to beat down unwanted suitors. The question is whether Bradley himself is a suitor or not.... 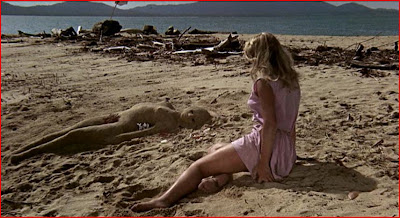 Maybe Age of Consent is Michael Powell's Invasion of the Body Snatchers.
Age of Consent is taken from a painter's novel, and the main characters are more Pygmalion and Galataea than Prospero and Miranda. That relationship reminded me of a similar relationship in Powell's most famous film, The Red Shoes. In that story, initiated by Pressburger and adopted by Powell later, Boris Lermontov is a ballet impresario and Victoria Page his star dancer in the making. A visionary but not an artist in his own right, Lermontov shapes Page into his desired image through intellectual and emotional manipulation. Vicky is torn between her loyalty to dance and her love for a composer -- Lermontov has told her that she can't have both art and love -- and the tension destroys her. In Age, Powell directs a kind of do-over of the fundamental archetypal relationship at the heart of Shoes. While Lermontov may see himself as the real total artist and Vicky as his model, in Age that's the actual relationship between the leads. Cora becomes a willing servant of Bradley's art, eventually putting aside any agenda of her own. As a true artist, Bradley's mentorship of Cora is free of the manipulative, exploitative quality that makes Lermontov a kind of villain. And in an ending that actually took me by surprise, but struck me afterward as an old director's self-gratifying fantasy, Bradley's apparently selfless dedication to art is rewarded by Cora's sexual desire. 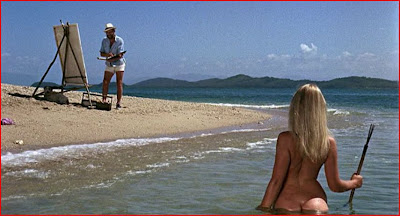 Powell's achievement in Age of Consent is kind of magical. Without the resources to create the incredible special effects of his Forties films, the director put his artistic stamp on the film with details as simple as set painting. Bradley gradually transforms his sabbatical shack into a dazzling interior, complete with dazzling sawblade sun, and once he's fully settled in you know that you're in Michael Powell's world. He also makes the most of a lush location; Bradley's paradise combines the best of nature and art. 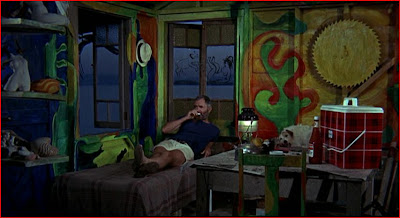 Young Mirren is a kind of special effect in her own right, setting a precedent for decades of cinematic nudity with which her reputation as a great actress has only recently caught up. James Mason is a hero merely for facilitating a final Powell feature, but he was clearly a true believer in this project, giving a looser, livelier performance than I'd ever seen from him. With his beard and his hint of an Australian accent he seems determined not to do "James Mason," and he succeeds admirably. The only major fault I can find with this film is Jack MacGowran's obnoxious performance as Bradley's disreputable crony, who brings nearly needless plot complications with him to the island. On the other hand, Godfrey gives a great performance, almost award-worthy if there was a supporting animal category.

Powell's luck remained bad, however, and Age of Consent was shown in most markets in mutilated form. Fortunately, I never got around to seeing it until Sony made it available in a two-film set with A Matter of Life and Death, one of the director's Forties triumphs. Age is not embarrassed by the company.
Posted by Samuel Wilson at 6:10 PM

My only problem with Age of Consent is that there's a little bit too much broad humour. But mostly it's an interesting and quirky little movie, and Mason and Mirren are electric.

The tragedy is that most fans of Michael Powell's work don't even know this movie exists.

d: MacGowran nearly sinks the movie when he shows up on the island. The scene where he attempts to seduce one of Mason's neighbors, only to be "raped" by her, is awful. But the plot seems to need both main characters to lose their money in order to set up the final revelation of their true feelings for each other. That doesn't excuse MacGowran's performance, however.

As for tragedies and mysteries, what about the few films Powell managed to make between Peeping Tom and this? Now there's obscurity!

"As for tragedies and mysteries, what about the few films Powell managed to make between Peeping Tom and this? Now there's obscurity!"

Samuel, be thankful that They're a Weird Mob remains lost in obscurity. It's a ghastly comedy, a horrific embarrassment.