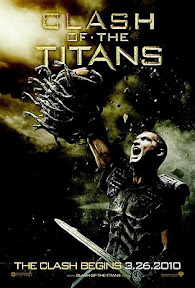 "The ancient gods were petty and cruel and plagued mankind with suffering." So went the legend of the Hercules: The Legendary Journeys TV series, which probably passes for an ancient source for Louis Leterrier and the authors of his latest film. Their most ancient source, in all likelihood, was the Ray Harryhausen production they were assigned to remake. That 1981 picture provided the present filmmakers with a laundry list of characters and creatures who needed to appear in their screenplay: Perseus, Andromeda, Zeus; a Medusa, a Kraken. It also seems to have served as a "how not to" for the remake team, particularly when it came to costuming the characters. The important characters -- Perseus and the Olympian gods -- must not appear to be wearing "sheets" or "diapers," nor should Sam Worthington in the hero's part bear a hairstyle in any way resembling Harry Hamlin's much-deplored do. Perseus must impress the modern audience as a badass, so he has to have a buzzcut. The gods, meanwhile, must all wear gleaming suits of armor, the better to look like video game characters. The film as a whole makes a mixed impression visually. Much of the art direction -- the interiors of palaces; the streets of Argos -- is quite attractive, while the character designs are pretty hideous.

Worse than the cosmetic alterations to the Clash story -- itself something of a travesty of myth -- is the new film's attitude. Has a mythic adventure film ever been this grim or glum? The new Clash is the work of people who had no business making a movie based on Greek mythology. I appreciate that the basically fictional nature of myth leaves writers free to interpret the material by their own lights, but you would think that an adapter of myths might convey to audiences an appreciation of those qualities that have kept these particular myths in our consciousness long after we stopped worshipping the gods of Olympus. Instead, the writers have rendered the realm of myth a miserable place where the reign of gods is an intolerable tyranny, and humans actually wage war on gods by destroying their statues and denying them the worship which, according to this film's unoriginal premise, the Olympians depend on for their power, if not their lives. The writers seem to have a beef with religion itself that they take out on a dead religion in a fantasy film in which gods are real. That annoys me. I'm an atheist who enjoys Jesus and Bible movies, and I explain this arguable eccentricity by saying that I see The Greatest Story Ever Told as no more a call to prayer than I do a film about Hercules. They are equally fantastic as far as I'm concerned. But in the 2010 Clash we have a movie that treats the Olympians' expectation of worship as if the Inquisition was outside the writers' own doors. It's a fantasy film with little sense of fantasy or of wonder, and it doesn't have the courage of its own convictions. Sam Worthington's dull Perseus insists stubbornly on saving Argos as a man, not a god, but defeats the Kraken (a giant mouth with tentacles) by displaying the Medusa's head to it while riding a magical flying horse, after accepting "black magic" healing for a giant scorpion bite. Zeus himself (poor Liam Neeson) notes the inconsistency, but this "not as a god" business seems to mostly be a matter of not putting on airs and not enjoying one's work. The 2010 model Perseus is a hero for his time, perhaps, -- ours, that is, -- in his sullen nurturing of grievance and his apparent preference to be left alone over being a hero-king. There is the stink of Gladiator on him.

To be fair, Leterrier's Clash has some nicely done action sequences, and I wonder whether people who don't share my attitude toward mythology would simply enjoy the remake. I can't help but think that Worthington's anticharismatic star turn would turn anyone off, and as it turned out, the film was no blockbuster. When it attempted originality, it dropped some lovely bombs of bad dialogue, my favorite being Io's request that an impassioned Perseus "calm your storm." In its terse badness, that rivals my favorite bad dialogue of the last decade: William Hurt's "Do not fret" in The Village. More original still is the Djinn, a hulking desert creature out of a video game (or destined for one) who offers Perseus his guttural grunting assistance until the climactic moment when he can strike a tide-turning blow against the Medusa by --- blowing himself up! The mind reels....

The entire project was driven by a notion that the Harryhausen film had grown so popular since its relatively underwhelming original release that a remake would be pre-sold, but that it had to be retold in the language of 21st century cool and purged of any hint of "corn" or "cheese." The test of its success will be simple: will anyone remember it thirty years from now? Let the Gods decide....
Posted by Samuel Wilson at 6:11 PM

I hated this movie, Sam. The Medusa scene in the new version was a travesty as was much of this mess. A pointless remake. Apparently, due to its worldwide success a sequel is promised/threatened. Ugh.

Everybody seems to hate the Medusa scene, especially since most people think it was the highlight of Harryhausen's film. While I didn't like Perseus not going after her alone, I did like the way the creature looked and how it moved. They weren't going to top Harryhausen for suspense so they went another way. But as you can tell, I did find the remake pointless and there is a lot to hate in it.

What happened to the days when a hero was a hero? In this movie, Sam Worthington plays Perseus as a victim, rather than as a hero. His constant mewling and whining about wanting to be a "man not a god" proves that he doesn't really even know how to be a man, much less a god. I also have to wonder why Zeus is so easily manipulated by his brother, and just where do gods of ancient Greece get late medieval armor from?

That's why I call Worthington's Perseus a hero for our time. He reflects our current idea of heroism, which has less to do, it seems, with upholding or advancing the good than with working out one's grievances or other personal issues, as if no one can be a hero who is not first a victim. Maybe the alternative is too aristocratic or simply persumptuous to contemplate.

Or perhaps being a hero requires abilities most people now are lacking...such as a willingness to sacrifice everything.