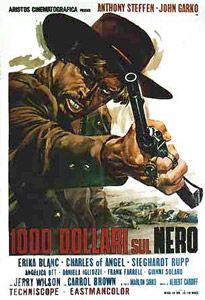 Johnny Liston has just done twelve years hard time for a crime he didn't commit, but freedom may prove harder still. He's hardly out of stir when he's ambushed by bushwhackers. He survives by playing possum and catching them unawares as they try to loot his body, pummeling them and confiscating their boots. Then he finds out that his brother has married his girlfriend. Things don't get better when he's reunited with his mother. She always liked the other brother better. You could tell she had different attitudes about the two. Our hero is just plain Johnny, but she named his brother Sartana.

You may have heard that name. "Sartana" may be second only to "Django" as an archetypal Spaghetti western protagonist, starring in films with those peculiarly elaborate Italian titles along the lines of It's the Big One, Sartana, I'm Coming to Join You or Sartana's Waiting; Why Aren't You Dead Already? I exaggerate, but only slightly. Anyway, Johnny's brother is not that guy. He just happens to be played by John (Gianni) Garko, who actually did play that guy. It seems that someone saw this film and decided that Sartana was such a cool name (it is, actually) that it had to be used again, and that Signor Garko fit the name as well as anybody. In fact, the name and the man were apparently so cool that the reborn Sartana would be a good guy, while the proto-Sartana of Blood at Sundown (the Italian title means "A thousand dollars on the black, and what that means in terms of the story is a mystery to me) is a raving crazy loon of a villain. 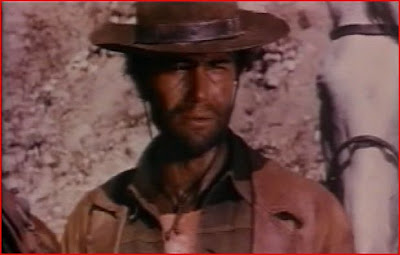 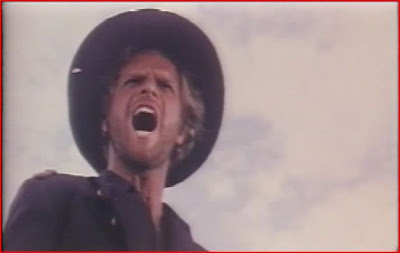 Gianni Garko as the original Sartana
Blood at Sundown is the gateway to VideoAsia's Spaghetti Western Bible Vol. 2, Sartana: The Complete Saga. This set collects ten films featuring either Gianni Garko or the character of Sartana, including several "official" films as well as rip-off films. There's a wider variance of quality in the editions than in previous VideoAsia or Grindhouse Experience collections, since a fair number of the titles actually look good. They're the ones that have been copied from German DVDs that fortunately included English language tracks. Blood at Sundown isn't one of those films. It's the more typical dupe off of VHS, complete with tracking issues, though it letterboxed somewhat.

"Albert Cardiff's" film didn't impress me at first. It opens with an overlong fistfight between Johnny (Anthony Steffen) and the bushwhackers, and the dubbing is pretty bad. But the film gets better as the story opens up to encompass three towns under the heel of "General" Sartana and Johnny's escalating effort to break up his brother's protection racket. It has a fairly sprawling cast of characters for a spaghetti western, including Johnny's hysterically mute ally Jerry, a collector of explosives, and the corrupt judge who sent Johnny to jail, as well as the lovely Erika Blanc as Joselita, sister of the man Johnny supposedly killed. 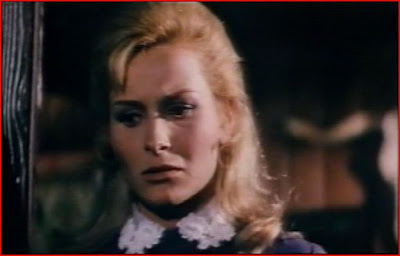 Erika Blanc (above) is one of the good, but Roberto Miali (aka Jerry Holt, below) as mute Jerry is good, bad and ugly all in one. 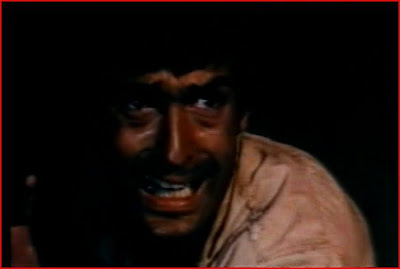 Looming in the background is Rhonda, the Liston matriarch, who indulges Sartana's madness because it makes her, a former servant, the most powerful woman in the community. Carla Calo has an awesome scene when she finally realizes that Sartana is going too far, yet demands that the women of the town fall on their knees to beg her help before she marches into the middle of a mass gunfight armed to stop her son. She can do it, too. She has no problem whipping her boy in the face when she thinks that Johnny has humiliated him. 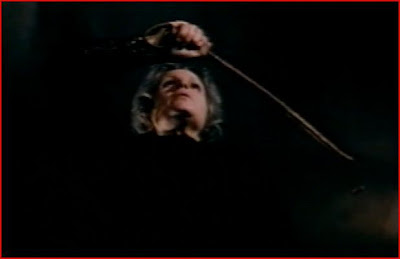 The lengths a mother must go to. Carla Calo as Sartana's Mom. 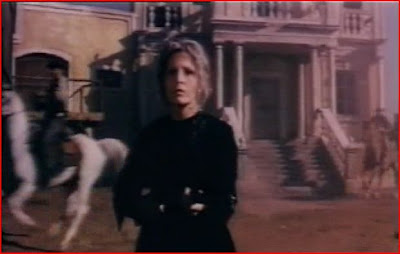 Blood at Sundown has a number of strong female roles, and the filmmakers believe in equal opportunity mayhem. The women of the main town join in the final massive battle with Sartana's men. This is the sort of film where anybody can become a killer. Nor is the film sparing of the fair sex. Innocent women are gunned down in cold blood, and an old lady and a baby are trampled by a rearing and plunging horse at one point. 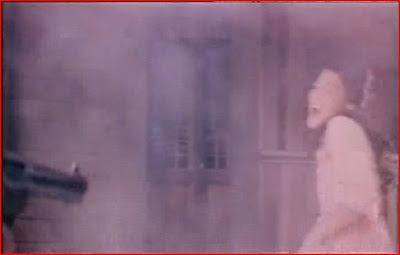 The women of Blood at Sundown can dish it out as well as take it. 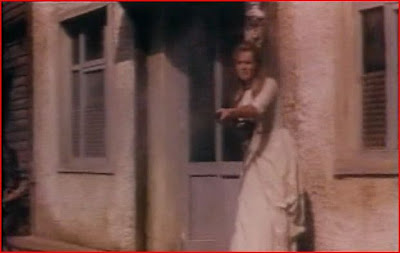 Cardiff's (aka Alberto Cardone) initially stodgy direction becomes more forceful as he makes effective use of his town locations and the sinister Aztec temple ruin Sartana uses as his headquarters. He produces nicely done tracking shots of Sartana's gang rampaging through the towns while making nicely modulated use of the zoom lens in a scene when the Judge desperately seeks shelter from a suddenly wrathful Sartana. The English language dialogue isn't particularly well acted and is sometimes lazy (as when Sartana yells the name JOHNNY about ten times in a row), but there are cool lines like Sartana's motto, "The right to punish is mine," which sounds like something the later Sartana might say, or his threat, "When the sun sets, I promise there'll be very few to enjoy it." 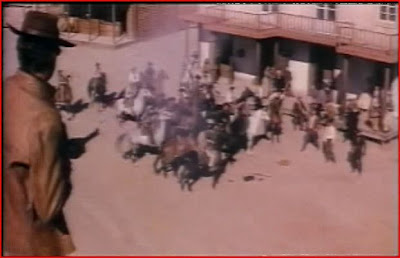 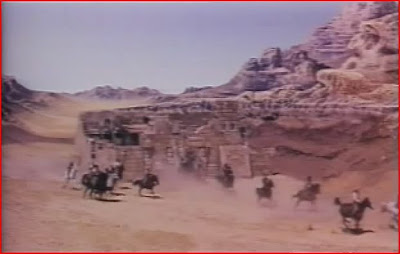 Blood at Sundown doesn't fall into the conventional spaghetti categories of mano-a-mano duels or revolution south of the border. Even the climactic showdown between the brothers is interrupted by outside interference. The film isn't really about one or two super gunmen, but strives for a more ambitious scope, at least in the scale of violence, that gives the film a distinctive tone, as if one Italian film, at least, was trying to absorb the lessons of the American "adult" or "psychological" westerns of the 1950s. It's far from a perfect film, but I'd definitely recommend it to spaghetti fans and to western buffs in general.
Posted by Samuel Wilson at 11:34 PM

I've been in a Spaghetti Western mood lately so I was really intrigued by this review. I've never even heard of this one and I thought I knew the genre pretty well. Thanx for pulling me back to reality. lol

I'll have to hunt this one down at some point.

Rev., I was rather unaware of the whole history of Sartana before I saw this collection in the store. It was just a name I heard a lot, and I'm pretty sure I've seen none of these titles before. Right now I'm pretty stoked about working my way through the set.

The Sartana character in BLOOD AT SUNDOWN is unrelated to the 'magician gunslinger' of the actual Sartana series although Gianni Garko played that character in five films. George Hilton played him in another Sartana flick.

There were supposedly some 17 films featuring the character, or a retitling of other pictures to capitalize on the name itself. I've only seen a few of the unofficial Sartana movies and those others aren't very good, IMO.

Venom5: It is odd that there could be no Sartana series without Blood at Sundown and yet the eventual character is so different from his inspiration. The VideoAsia set has the Hilton film you mention as well as others starring William Berger and Fabio Testi.

I know I am well over a year overdue with this comment; but, I only just discovered your blog.

"venoms5" is absolutely correct about BLOOD AT SUNDOWN. It isn't a part of any real SARTANA series.
The only connection is the character name. Garko just liked the name and he wanted to use it again when Parolini hired him to portray the lead in what became IF YOU MEET SARTANA--PRAY FOR YOUR DEATH.

Officially, there are only 5 Sartana films (IF YOU MEET..., ANGEL OF DEATH, HAVE A GOOD FUNERAL, LIGHT THE FUSE..., and SARTANA'S HERE..).
All of the others were "cash-ins" where characters were renamed due to the success of the films in the official series.

This VideoAsia "Sartana" set is, to me, a bit funny. One could take a slew of Westerns with characters named "Johnny" and call it "The Johnny Collection" or "The Johnny Series Collection" and it would be the same concept.

That all said, though, the only really weak film in the collection is the SARTANA IN THE VALLEY OF DEATH flick with Berger.
The rest of the films are downright good..or at least entertaining.

Nice blog, by the way!

In Spanish (especially Mexican Spanish) the name is a not-frequently-used woman's name!