Regular readers will recall that I talk up ad nauseum the Albany Public Library's DVD collection, my main source of free and exotic cinema. But now, the rest of the story: the underbelly of this cultural institution, the stuff in the inventory that makes you ask how on earth it got there before you even watch it. As a rule, the library does what it should. The latest releases from Hollywood? Check. A diverse selection of foreign films? Check. Documentaries? Check. The Criterion Collection? Nowhere close to complete, but a decent number of films. But sometimes you don't know what someone's going to donate, and the library's principle seems to be to turn nothing away. This is the first in a series in which I explore some of Albany Public's more eccentric titles that might be of interest to the movieblogging audience.

Let's start with a straight-to-video action movie filmed in Las Vegas in the hairiest days of the 1990s. I approached Sword of Honor apprehensively, thinking it would be an utterly mediocre film, but it was probably too low-budgeted to be just plain mediocre. While the action is, for the most part, nothing special, an innate eccentricity came through in the writing and acting that made it interesting, as if the creative people couldn't help expressing themselves even when they didn't really want to.

Sword of Honor opens in the 13th century, while the Mongols still ruled China. We see two factions of barbarian dudes converging on a clearing for a battle of perhaps a dozen people to decide the fate of a mighty empire. One leader finally defeats another and raises his sword in bodacious triumph as we dissolve to "Las Vegas, Nevada. Present Day," where the same sword, now known to history as "the Sword of Honor," is being auctioned off to an art gallery. 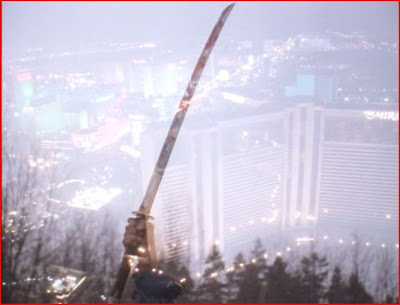 But forget that for a moment while we follow cop buddies Johnny (Steven Vincent Leigh) and Alan into a convenience store where they've noticed a robbery taking place. It's that vicious stickfighting gang, but these plainclothes heroes have the answer to that: kickboxing! The aborted robbery turns into a protracted rout and an adrenalin rush for the cops. 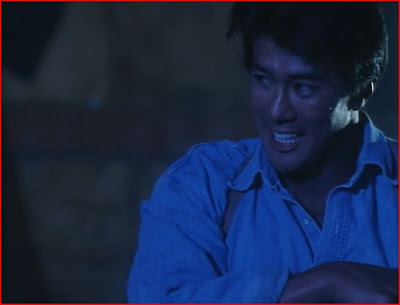 Johnny and Alan are really into martial arts. On their downtime they help out at the martial arts school run by Alan's sister Vicki (Sophia Crawford), and Alan's planning to retire from the force and work there full-time. But not everyone respects the ancient discipline. Especially irreverent are two slovenly vice cops, Frank and Dogger, who walk in on our heroes engaged in some horseplay in the locker room.


Frank: What are you doin'?
Johnny: It's called martial arts, Frank. It's something you don't have to worry about, busting pimps and prostitutes.
Frank: Problem is, Johnny, people don't care for no martial arts or not -- right, Dogger?

That last is pretty much an unanswerable comeback. I wonder whether Frank was meant to say something else, and that for some reason the director didn't bother with a second take. Maybe he was just confused, given that he's actually playing Frank. As we'll see, director Robert Tiffi is often indulgent toward his actors, particularly if they're named Tiffi or Tiffe, as several are.

In any event, Frank and Dogger won't have Alan to not kick around anymore, since he's retiring right on the night that a clever burglar attempts to nab the Sword of Honor from the gallery. This criminal mastermind may have thought that a guard might use the SofH on him, since he came prepared to knock over the art gallery with a small army equipped with machine guns and rocket launchers, the better to fight off the caravan of cops who eventually arrive on the scene, ruining Alan's retirement party. 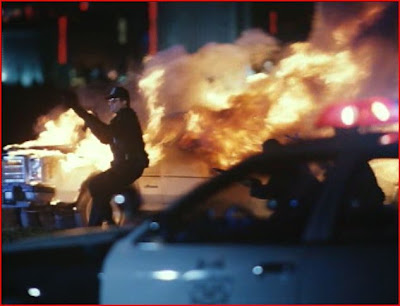 Johnny and the gang left Alan behind, since the retirement boy had a foreshadowingly funny feeling about responding to a call on his last day. Johnny tells him not to second-guess his gut feeling, but who should show up in the middle of the art gallery siege but Alan, who tells Johnny, "Hey, there's only one thing you can never second guess....being there for your partner." Need I tell you what happens?...

...Of course it's up to Johnny to go to the martial arts school and break the awful news about Alan to Vicki at the end of class. Vicki kind of gets jacked by fighting herself, and wants in on the investigation of Alan's demise at the hands of the sword-burglar. Johnny took a bullet (but wore his vest, Alan!) and didn't get a good look at the culprit, so maybe tracing the history of the SofH will give them leads. Did you know that "The Mongolian Empire fell to a single Ming soldier bearing the Sword of Honor. It was believed that whoever had possession of the sword could never be defeated." That's what Vicki reads in a Chinese book, to which Johnny replies, "Well, we'll see about that."

It sounds like our villain should be heading for Asia to stir up the yellow hordes against the hated white man in a scenario out of The Mask of Fu Manchu. But the thief and cop killer, Richard Sireno (Angelo Tiffe) is only a flunky for club owner and gangster Rudy Anthony (Jerry Tiffe -- see what I mean?), who promptly puts the hottest artifact on the planet for sale to the global underworld. The first bidder, a Japanese gangster, comes calling at Rudy's nightclub, only to be subjected to some unsettling small talk.


Rudy: You appreciate beauty, Yoshima. Look at my man. [To man] Take off your clothes. See how beautiful he is. See how powerful he is. Power is a beautiful thing, isn't it? 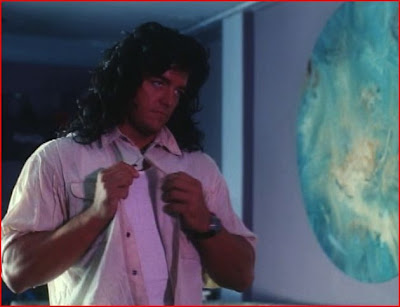 Yoshima: I'm only a business man. I don't know about those things.

But Rudy detects that Yoshima's bodyguard doesn't seem properly impressed by the beautiful long-haired muscleman. Take it to the dance floor, boys! For once, brawn beats skill, but Rudy tells his man to spare the defeated opponent. How charitable, given that five minutes later Robert blows away both Yoshima and his bodyguard after they turn over the money for the sword. You see, Rudy and Robert are running a bit of a scam. They're accepting offers for the hottest artifact on the planet from gangsters, then killing them. For Rudy it's all about the money, but Robert seems more attached to the sword. Not that he wants to go stir up the Asian hordes or anything. I think he simply feels that he earned it and he ought to keep it.

Meanwhile, Johnny and Vicki can't turn around without having to fight people. This has nothing to do with their investigation, with which they're getting no help from the cops. Las Vegas just happens to be littered with loitering types who want to start trouble on short notice. It's like a minefield of roid rage, whether you find them leaning on your parked car or shoving their way past you at the gym. This means there are plenty of opportunities for our heroes to get jacked up by kickboxing people. It's a serial form of "meeting cute" that finally forces Vicki to ask a sensitive question.


Vicki: How come you and I never got...?
Johnny: Involved?...You're my partner's sister, so I felt that it wasn't...right.
Vicki: How do you feel now?

Am I missing a fine point of police etiquette, here, or are there subtexts? Why wasn't it right, Johnny? Would it have been poaching on your partner's prerogative, somehow? Was it unfair to Alan in some way? Did it seem like...cheating? Better not to dwell on this. To answer the immediate question, Johnny feels like getting involved. 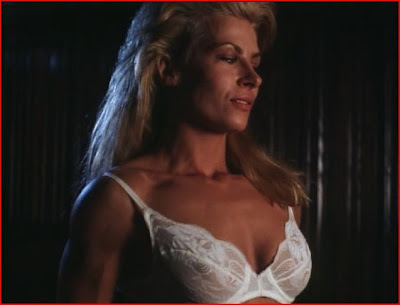 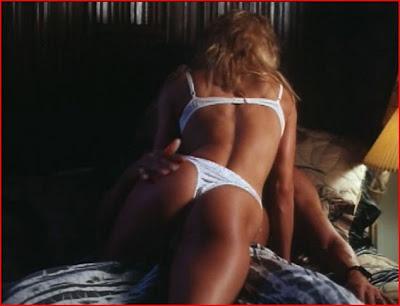 The multi-talented Sophia Crawford, now a Hollywood stuntwoman,
in SWORD OF HONOR 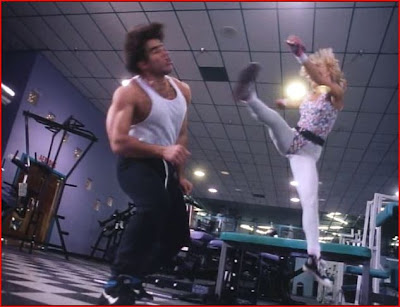 Of course that means that Vicki is at least partly doomed, if not fully doomed like an about-to-retire cop. Sure enough, following Johnny against orders on a tricky lead, she takes a bullet intended for him from Dino, a corrupt cop, and ends up in intensive care. Turns out the cop was acting on orders from a corrupt chief, who takes money from Rudy Anthony and takes a bullet from Robert for screwing up the hit on Johnny. In a surprise, the scuzzy vice cops turn out to be good guys and Johnny's allies, but that doesn't mean their core values aren't shaken by the blossoming scandal.


Frank: It doesn't make any sense. The chief is dead. Dino was dirty, and you don't know who you can trust anymore....What are you lookin' at?
Dogger: Nothin'.
Frank: What, you think I'm dirty?
Dogger: I didn't say you were dirty.
Frank: Well, you were lookin' at me like I was dirty.
Dogger: No, you think I was lookin' at you like you're dirty.
Frank: Well, you got me thinkin' like I was dirty! Come to think of it, I don't know anything about you. What made you want to be a cop?
Dogger: I didn't. I wanted to be a singer.

Despite the nearly existential quality of this exchange, the cops are staking out a construction site rather than Godot. The payoff is a car chase that proves that proper action directors can cut corners elsewhere, but never on explosions. 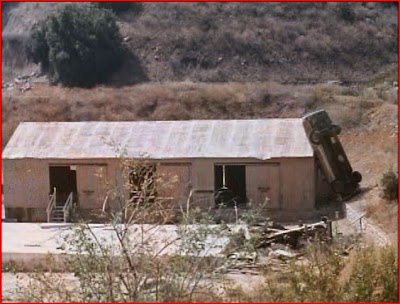 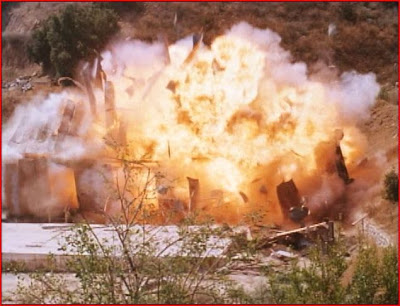 I think I've set the table for you. There are more fights to come, including a surprisingly brief battle between Johnny and Rudy's long-haired beefcake and an ultimate showdown between Johnny's flying feet and the Sword of Honor. There's also a power struggle between Rudy and Richard amid the arrival of the latest victim, an exuberant Russian, and an homage to both Looney Tunes and The Silence of the Lambs as Tiffi deceptively intercuts shots to suggest that Johnny is closing in on Robert only to find an old woman screaming in a shower. You'll learn all you ever need to know about Robert's childhood Halloween adventures, and you'll see somebody's really silly death scene. That is, you will if your public library is as thoroughgoing as mine in its diversity of genres and standards of quality. I suppose a comprehensive dedication to cinema history might require a library to have at least one film of this kind to represent its period and genre, but I still suspect that Albany Public has it by pure accident. Considering what the major studios put out these days, I'm not really so sure that Sword of Honor is as out of place in a library as I first thought.

Here's a trailer that tells a quite different story about the Sword but otherwise gets the movie right.

Wow--there's nothing like this at my local library. One of the many downfalls of living in a small hick town I suppose.

Your reviews never fail to entertain me.

Based on what I see at the smaller public library in the town where I work, I'd almost believe that you're more likely to have stuff like Sword of Honor in the smaller towns -- or at least a lot of public domain stuff. And I always appreciate the affirmation, Rev.