Dominguez: Do you know what a mummy is, my son?
Rookie: No, sir.
Dominguez: At first, you will think it's a human being like you or me, but later you will realize that it's not, and that's when you will tremble.
Rookie: Yes, sir. 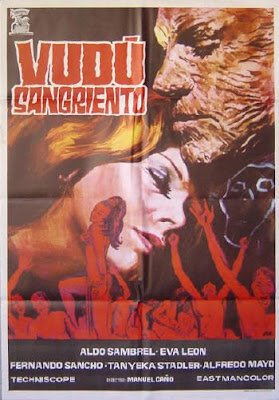 Here is a tale of a love that spanned the ages. One thousand years ago, approximately, and somewhere in West Africa, again approximately, Getanebo the studly bald man loved Kenya, who was married, I think, to another man who looked a lot like the cleaning person who used to work at my neighborhood coin-op laundry. This man discovered the lovers cavorting on a beach, attacked Getanebo with a spear, and died in battle. For this, Kenya was decapitated and her head fondled by the local mob, while Getanebo was jabbed with a secret formula that reduced him to a state of living death. After perhaps being gang-raped in his immobile state by the bare-breasted women of the village, the perpetrator was placed in a sarcophagus and left in a cave. A prophecy was spoken of the lovers: 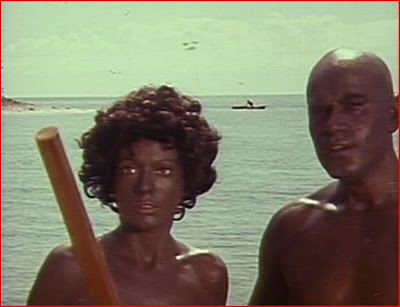 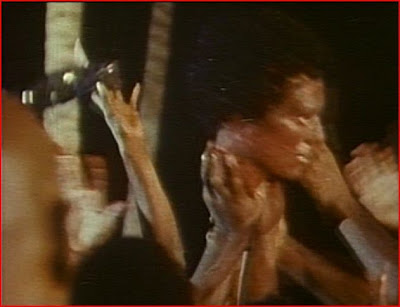 Happenings and life repeat themselves, Within a thousand years, two thousand, Getanebo will seek Kenya, blood will be spilled, terrible things will happen again and start again, begin again.

In A.D. 1972, or thereabouts, 300 years after Getanebo's sarcophagus was first rediscovered and deposited in a museum, it was transported via cruise ship to Port-au-Prince, where the eminent Dr. Kessling would open it and display the mummy inside on live television. On board the ship, a fire-eating interpretive dancer pantomimed an ancient ritual, as explained by the professor.

Your head will burn, and your body will dissolve into nothingness. Wait for the spirit to descend....We have no eyes, but we see; no ears, but we hear your voice; no legs, but we ascend to heaven as particles of God.

There must have been some magic in that dirty dance she did, 'cause when she went to shake that thang, he began to... well, suffice it to say that he went for a little walk. His skin is a little lumpy, but he isn't that much worse for wear, really, and a little exposure to sunlight improves his complexion drastically. Better yet, he gets an eyeful of Dr. Kessling's assistant Sylvia. 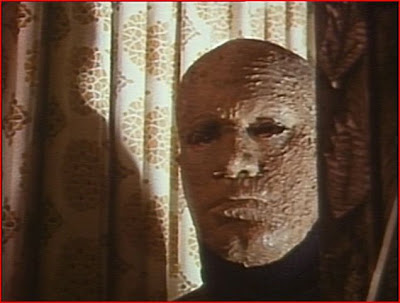 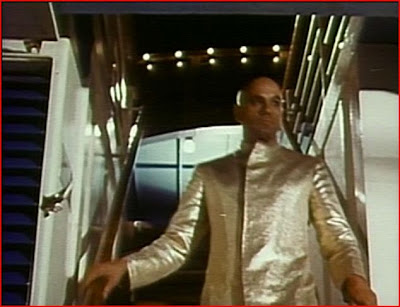 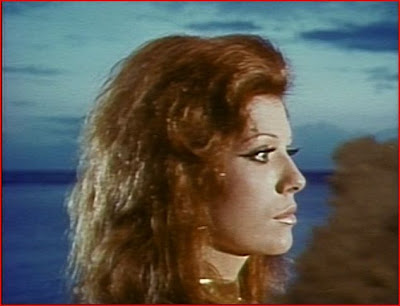 Manuel Cano's rendering of the story in the Spanish film Vudu Sangriento, retitled a few years later to exploit both blaxploitation and The Exorcist in American theaters, confuses the story a bit. According to IMDB, Sylvia is played by Eva Leon, while Kenya is played by another actress whose only film this was. If Cano went to that trouble, you might expect him to cast a black actress for the African part, but Kenya sure looks like a woman in blackface to me. Anyway, despite the fact that we supposedly have two different actresses involved, the reanimated Getanebo (Euro stalwart Aldo Sambrell) instantly makes Sylvia as the reincarnation of Kenya. That's the good news. The bad news is that the sight of Sylvia also inspires some red-tinted flashbacks of Kenya's execution. The trauma reverts poor Getanebo to his former muddy self, and he beats a retreat back to his sarcophagus.

A little later, he ventures out again, now clad in a swanky gold Nehru jacket. He soon discovers that he's hit some sort of karmic jackpot. Dr. Kessling's assistant Freddy is a dead ringer, albeit slightly paler, for Kenya's husband. Getanebo quickly converts him to an obedient servant by jabbing his curare-laced ring into the man's neck. A ship's steward answers to the description of the executioner who killed Kenya. Getanebo explains the arcane significance of dice to this man before decapitating him.

Getanebo: If you try, number four will come out three times. Do you know what that means?
Steward: What does it mean?
Getanebo: That someone will have their vengeance. 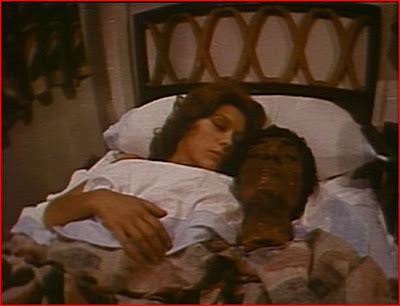 The mummy (or shall I call him the "voodoo black exorcist?") makes Sylvia (Eva Leon) an offer she can't refuse.

The mummy offers the severed head as a furtive love token to the sleeping Sylvia, declaring, "Your killer is dead. I bring proof of my vengeance, O Kenya, most beloved of women." Getanebo realizes, however, that he'll have to be more subtle in the future. Learning that Dr. Kessling expects to meet Dr. Craig, "the foremost authority in matters of African primitivism," whom he's never actually seen, our incorrigible romantic hurries off the ship, eluding the plodding Detective Dominguez, intercepts Dr. Craig, and has Freddy run him over with a steamroller. This is a pretty good play on Getanebo's part, as he is something of an expert on African primitivism himself. Dr. Kessling, Sylvia, meet Dr. Craig!

Kessling: Your documentation is amazing. But Dr. Craig, I disagree with you on the pantheism of this voodoo religion.
"Craig": Why?
Kessling: They never invoke a single god. Rain or shine, good or bad, all depends on the loas.
"Craig": You know nothing. The loas are intercessors between men and God. God is lost in the universe and can't be invoked. He's nothing but a threat.
Sylvia: That's not what you said in your last book.
"Craig": However, that's how it is.
* * *
"Craig": Sylvia is your name now.
Sylvia: It's always been the same.
"Craig": My, that's strange. You deserve a prettier one.

Before Sylvia can ask what "Craig" has in mind, we cut to another conference between the mummy and the doctor. By now, Kessling has realized that he isn't dealing with Dr. Craig, but he takes the news like a trouper. After all, his new colleague is quite forthcoming about the details of his existence, explaining that his complexion and temperament is altered by the sun and "various cosmic factors." Kessling notes that Getanebo speaks English quite well. "300 years in museums," the mummy explains, "I have learned many, many things."

Thus begins an awkward collaboration. For some reason Getanebo feels obliged to cooperate with Kessling's live TV program. This imposes farcical complications on him when he gets the urge to go out into Port-Au-Prince and kill a documentary director and the exotic dancer from the ship. In mid mayhem the mummy realizes that it's almost showtime! He has to scramble back to the museum-studio and into his sarcophagus in time for Kessling to make the big reveal.

Kessling soon inflicts greater discipline on his charge, chaining up the sarcophagus so Getanebo can't open it from the inside. But as the security guards watch in something like bemusement, Freddy cuts the chains so his master can emerge and instruct him to "Find Kenya!" Now one security guard leaps into action, dashing through hallways to intercept Getanebo in back of the museum. The time has come for one of the most extraordinary battles you'll ever see on film as the guard goes after the mummy with a fire hose, Birmingham style. Getanebo desperately blocks the powerful stream with a wooden crate, which he finally throws to disarm his opponent. Then the mummy renews the struggle, swinging a vicious coil of rope until the guard goes down. Then the mummy goes down. The guard gets a few good kicks while Getanebo struggles to recover. Finally gaining the advantage, the mummy bangs the guard's head into a metal door a few times to finally take him out. 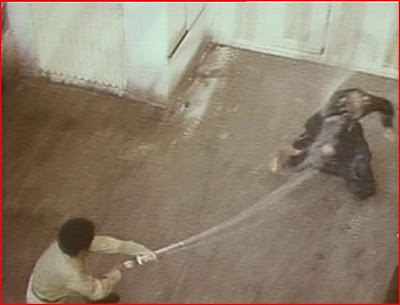 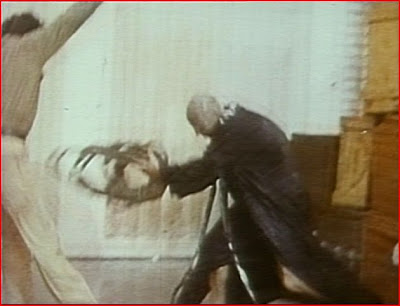 Then it's off to a desperate cavern rendezvous with Freddy, who has kidnapped Sylvia out of a shower and dressed her up for presentation to his master, even as Dr. Kessling, Detective Dominguez (a self-described "fat old cop" who's "not used to thinking so much") and some flamethrower-toting cops close in for the rescue....

The Psychotronic Video Guide gives this film quite a write-up as a strange, inept film. Looking at the pan-&-scan Mill Creek edition from the Drive-In Classics box set. I can see that it was once a fairly handsome picture with nice shipboard cinematography and location work. The original Techniscope prints clearly had some good widescreen arrangements that are pretty much lost on the DVD. Aldo Sambrell definitely deserves some props for his all-around performance, from his Lex Luthor looks to his unusually frantic interpretation of an already unorthodox mummy concept. Yet the screenplay by Santiago Moncada, a veteran of such films as Hatchet For A Honeymoon, All the Colors of the Dark and A Bell From Hell, is outrageously stupid at points. I don't know whether he or director Cano must be blamed for the inexcusable blackface work in the prologue, the howling lameness of Getanebo's battle with the security guard, or the annoying repetition of the flashbacks to Kenya's none-too-convincing severed head. Cano gets all the blame, however, for a moment cited by Psychotronic when you can see the camera crew in a mirror as the mummy bitch-slaps the dancer.

The idea of transplanting the standard Imhotep-inspired story of monstrous reincarnated love to an Afro-Caribbean setting deserves some credit for creativity, though I wonder whether Getanebo isn't really a zombie rather than a mummy. Overall, Vudu Sangriento offers an odd, occasionally enthralling mix of ambition and amateurishness that results in plenty of probably unintended entertainment for the discerning trash enthusiast.

No trailers or clips this time. Instead, take another look at our attractive female cast. 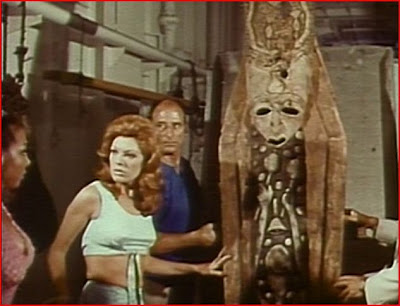 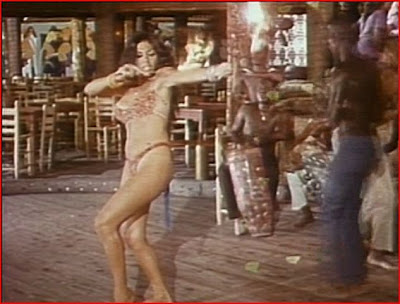 Posted by Samuel Wilson at 9:41 PM

I own the Mill Creek Ent. version, but have yet to take the time to check it out...now I must!

I tried to make it through this one last week, and failed. I got the Mummy vibe off it, and after that quickly drifted off to sleep. Though the opening "Head Dance" and the African Mask Sarcophagus (wha?) were interesting, as was the fire dance that was "exactly the same" as the ancient resurrection dances, somehow.

Vicar, I was especially impressed by the way the scholarly community treated the thousand-year old sarcophagus, wrapping a rope around it and swinging it around on cranes without benefit of crates or other packing materials. I must confess that it actually took me two tries to get through the film, which may be my way of advising people to endeavor to persevere.

GREAT WRITE UP, MY REVIEW IS COMING SOON. BUT THIS IS FUN WILD DRIVE IN B-MOVIE WONDER.

Lolita of the Classics said...

You reeeaally seem to find the most odd movies!

Cheesy: I'm looking forward to a second opinion on this one. Bring it on!

Lolita: Mill Creek Entertainment does most of the finding. I just buy their box sets. But true oddity in cinema is a kind of virtue just as true quality is.