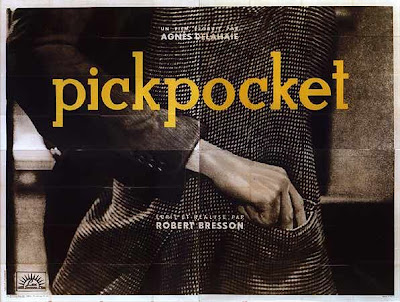 Bruce Li one day, Robert Bresson the next: that's the wild world of cinema for you. Bresson may seem to many cineastes like the furthest person from genre cinema, but at a certain point style and genre converge to the point that Bresson was his own genre by virtue of having his own idiosyncratic style and a distinctive point of view that he applied to all his subjects. This is the fourth of his films that I've seen. I saw Lancelot du Lac in college and found Bresson's style off-putting and pretentious. Years later I got Au hasard Balthazar, the one about the donkey, out of the library and was more favorably impressed with the conceptual rigor of his approach. I've also seen his farewell film, L'Argent, which I enjoyed as a grim piece of work that came complete with a car chase and an axe murder. In the extras for that DVD Bresson expounded his ideas of "cinematic writing" in a way that suggested that he was, in his own fashion, an action director. They also showed a playful attitude I warmed to, as when he told a 1983 interviewer that the film then playing in theaters that best exemplified his cinematic principles was Octopussy.

In any event, Pickpocket is a French crime film and therefore of inherent interest to me. Bresson warns the audience immediately that his film isn't made in the style of a policier, but he can't change the fact that it's a French film about crime. His disclaimer is still a fair one, since he's not really concerned with the milieu of crime as much as with the mental or spiritual condition of a particular criminal. Unfortunately, Bresson's concern on this occasion isn't especially original, since it'll soon be apparent to well-read people that this film is a variation on the theme from Dostoevsky's Crime and Punishment. Fortunately, Dostoevsky's story is a good one and adaptable to other settings.

Michel is an aspiring pickpocket who does crimes in part to provide money for his sick mother. As was typical of him, Bresson cast the part with a first-time actor, Martin La Salle, who subsequently moved to Mexico and became a full-time actor with films like Dr. Tarr's Torture Dungeon and Alucarda on his resume. Michel is a small-time Raskolnikov who argues in a cafe that society's geniuses ought to be able to steal and break other laws to provide for themselves and thus benefit society in the long run. He's not a good pickpocket initially, but is a fairly lucky one, escaping one arrest for lack of evidence. He's determined to become better at the trade and ultimately falls in with a very professional team that wreaks havoc in train stations. 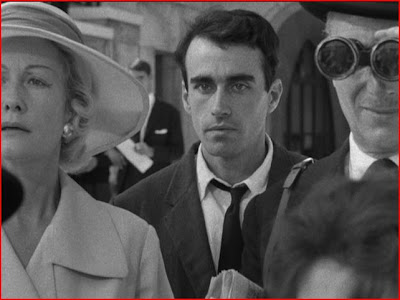 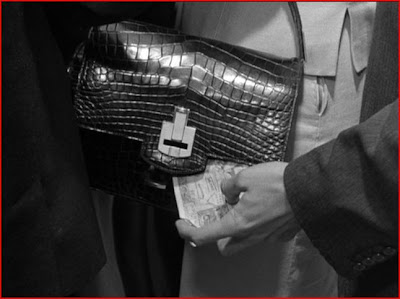 Pickpocketing is an ideal subject for Bresson's unconventional style, which tends to steer away from the human face and toward portraying bodies and objects in motion. What bugged me about Lancelot was his habit of focusing on the knights' feet when they were walking, for instance. Here, however, it's the sensible thing to focus on hands reaching into coat pockets and pocketbooks or passing swag to other sets of hands. The scenes of the gang at work in the train station are brilliantly shot and choreographed. The film is also well edited to build the momentum of the gang's crime spree and the tension of Michel's various risky solo jobs. 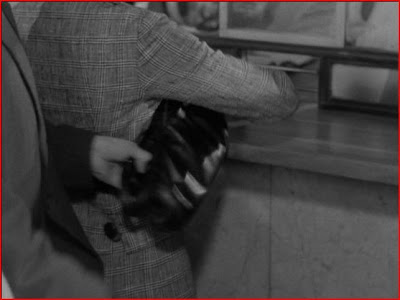 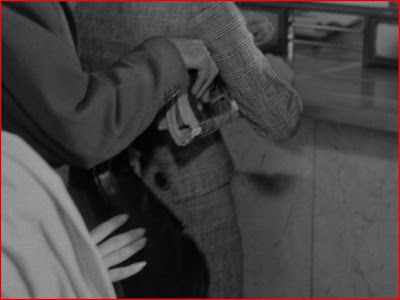 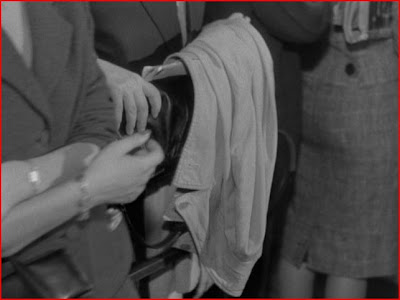 Dostoevsky kicks in again as Michel falls for Jeanne (Marika Green, aunt of Eva), a downstairs neighbor of his mother, and guilts over not being with his dying mom enough in her last days and failing to live up to his promises to her. He finds that it wasn't enough to salve his conscience to give her money, and he also finds that when his own conscience falls short, the idea of what people he cares for think of him is nearly an adequate substitute. From Crime and Punishment Bresson also appropriates the idea of a patient policeman engaged in subtle psychological warfare with his prey. As I suggested, it's initially annoying to discover that Bresson copies the Russian so closely, but he's talented enough, as are, for his purposes, his cast of inexperienced actors, that the story asserts its own individuality while following the Dostoevsky pattern. 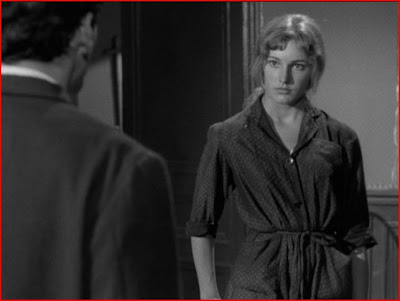 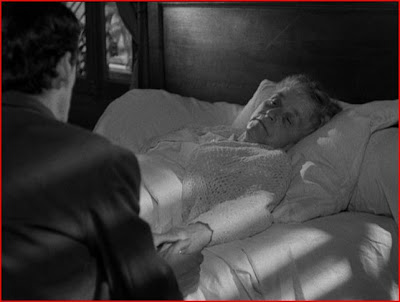 Bresson is often hyped for his spirituality, which is clearly present in films like Balthazar and Diary of a Country Priest. Watch the Criterion DVD that I got out of the Albany Public Library (a recent acquisition) and you'll hear Paul Schrader get a little nutty on the subject. He's taken a stopwatch to Pickpocket, it seems, in order to explain that Bresson cuts between shots with unorthodox timing in order to jar viewers into a state of unease that will presumably make them receptive to the incoming spiritual message. That's overstating things a bit. Pickpocket flows more smoothly than Schrader's intro might suggest (and why call it an introduction and then warn viewers of spoilers so they don't watch it until after they've seen the film, anyway?), and on this occasion the spirituality is basically Dostoevsky's, not Bresson's. The main thing is that it's a simple, accessible story intelligently cinematized in a way that non-specialist audiences should appreciate as much as connoisseurs. I still have a lot of Bresson to see (the Library has Diary as well as A Man Escaped), but I feel confident in recommending Pickpocket to people who want to try him out for the first time.

Here's the French trailer. The narrator is mostly speculating about the motives and mindset of the title character. Judge for yourself.

Posted by Samuel Wilson at 8:52 PM