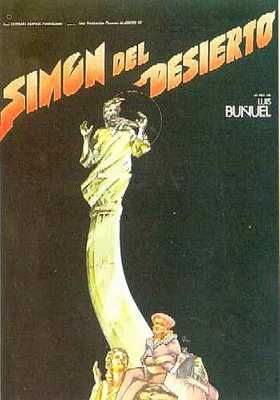 As far as I can tell, Luis Bunuel was already making this featurette at the time the project it was meant to be part of was falling apart. It was meant to be one segment in a portmanteau film, with producer Gustavo Alatriste envisioning contributions from other major directors. There was a problem. Federico Fellini was game, but wanted his wife as his leading lady. Ditto for Jules Dassin. Thing was, the producer's wife, Silvia Pinal, rather envisioned the whole project as a vehicle for herself, and expected to star in each episode. So much for the feature film. Simon del Desierto, Bunuel's last Mexican film, perhaps not accidentally featuring Pinal as the devil, ended up a film festival curio and, in the present, a somewhat overpriced DVD from the Criterion Collection. It deserves better.

The film is inspired by the life of St. Simeon Stylites, an early Christian and informal patron saint of flagpole sitters and similar cranks up to David Blaine. To avoid the temptations of the world, Simeon set himself up atop a lone column where he prayed, preached and fasted. In Bunuel's film, Simon (Claudio Brook) has been at it for a while, and has become enough of a celebrity that the town fathers (somewhere in the desert of Syria) have built a new, taller column for him to stand on. In transit from one column to another, he has an awkward encounter with his mother, initially rebuffing her request for a final embrace before relenting under public pressure. 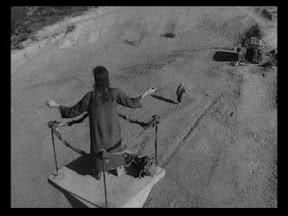 Simon is under plenty of pressure. People ask for his intervention, and with good reason. His prayers restore an ex-thief's severed hands, though the people seem to treat this as business as usual. The local priests are getting annoyed by Simon's "spiritual shenanigans," and some are looking for ways to discredit him. A dwarf shepherd disturbs Simon with the way he fondles a she-goat's teats. Simon sometimes forgets his prayers. And the devil comes to visit a lot, first as an overgrown 19th century schoolgirl who flashes garters and boobs at him, then as a naked scurrying hag, and later as a bearded shepherd(ess?) who Simon is meant to mistake for Jesus Christ. The act fails when an impatient devil punts a lamb out of the picture. 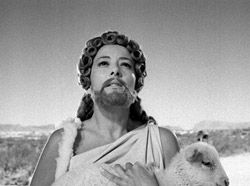 Later still the Antagonist zooms in on an cool coasting coffin before materializing on the column to take Simon on "a long, long journey." Cut to an airplane flying over the desert and a now-empty column, then cut to a modern-day dance club where the young people do the "Radioactive Flesh" while a bored yet better groomed pipe-puffing Simon watches. The devil wants to dance, but Simon tells her, "Have fun, I'm going home." She tells him that "Another tenant's moved in [on the column?]. You'll have to stick it out to the end."

Understandably, Simon is usually interpreted as one of the ambivalent atheist Bunuel's comments on religion. But I wonder. The sudden shift to the present seems like a punchline that all that came before was setting up, so that Bunuel may have meant to say something about the 1960s rather than about Christianity. Simon, after all, is drastically transformed. He is not the half-wild ascetic dropped in the middle of a discotheque to fulminate against flaming youth and their wild parties, but is practically reincarnated as a blase, beatnik-like intellectual type. The point may be that Simon's essential character type may fit more neatly into our modern world than the bulk of the film would lead us to suspect. Ancient Simon and modern Simon have alienation in common. He remains a judgmental onlooker, but now it seems that he lacks the point of reference, the steady base that he had in ancient times, so he's stuck watching the world and the devil dance on or dancing with himself.

Simon is definitely worth seeing, but is it worth owning? Criterion really ought to have a bargain price rate for items like this and Yukio Mishima's Patriotism that fall short of feature length, no matter what extras they include. But I can't get too worried about it because the Albany Public Library came through and picked up this recent release, along with The Exterminating Angel to complement its existing Bunuel holdings. This is the sort of film a public library should own. I deal with the other kind elsewhere.

Here's a Spanish language clip of the hand-healing scene. Nearly the whole film is available as a Google video, but the running time looks about two minutes short of complete, so beware.

Posted by Samuel Wilson at 9:19 PM

I'm intrigued. Seems to almost have a Alejandro Jodorowsky feel to it--would that be off-base?

It wouldn't, although Jodorowsky is more like an exploitation version of Bunuel. Simon also strikes me as a precursor of Bedazzled and Monty Python's Life of Brian in some ways. Not bad for 45 minutes.