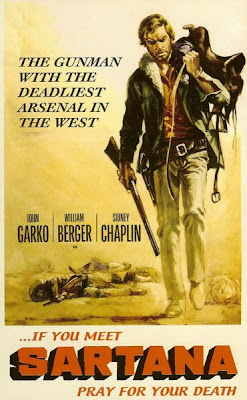 Gianni Garko made five films between Blood at Sundown, in which he played the villainous Sartana Liston, and "Frank Kramer's" film, including one western in which he played "Django," so we can guess he was used to the Italian style of exploiting popular character names. Wikipedia says that Se incontri Sartana prega per la tua morte was inspired by the success of Blood at Sundown, but it still seems strange that the producers (and Garko, who reportedly had script control in his contract) should want to evoke a character who was pretty much the diametric opposite of their new hero. Sartana Liston is scruffy and often hysterical. The new Sartana is neater (though his hair is longer than his precursor's) and exudes the existential calm of the typical spaghetti western hero.

The series Sartana has been described as a heroic character, but the protagonist of Se incontri Sartana seems as amoral as they come. I got no sense that he was a good guy, but the character may have a different sense of his purpose. His famous entrance line, uttered after he rises from playing dead to confront a gang that has just murdered a stagecoach driver and its elderly passengers, is "I am your pallbearer." For some reason that reminded me of the Blood at Sundown Sartana's utterance that "the right to punish is mine," but the new Sartana is never really as pretentious as that through the rest of the film. Like us, he's probably too busy trying to wrap his mind around the plot to maintain an attitude. 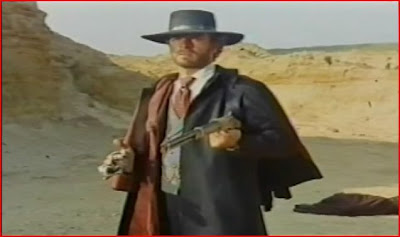 Se incontri is a nihilistic riot of backstabbing and backshooting. It opens modestly enough with Klaus Kinski taking pot shots at the stagecoach, but things get stranger with the next robbery, in which a plant inside the stage shoots down the mayor of Gold Spring, an innocent woman, and a priest, only to be shot down by another gang led by lead villain Lansky (William Berger) who could give Heath Ledger's Joker pointers on how to run a criminal gang. After his men take out the first robbers, he tells them to meet him at a rendezvous point where he wipes them out with a Gatling gun. He takes possession of a treasure that proves to be a box of rocks. 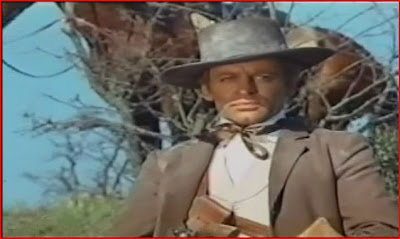 If I understood things correctly, some of the city fathers, namely Stewall (Sydney Chaplin) and candy-loving Holman, are conspiring with Mexican bandit chieftain El Tampico to commit insurance fraud with fake robberies (including real murders) in order to get the insurance money and keep the allegedly missing gold. It's in the conspirators' interest to have Lansky annihilate as many of the people involved as possible, though he's a risk himself as he begins to demand more money and sees the blackmail potential of the situation. Morgan is his right-hand man, handy with the throwing knife, but Sartana eliminates him in the "vestibule of the beyond," the dark workshop of Dusty, once an acclaimed sculptor and now a rummy coffin maker. Franco Pesce aims for a Walter Brennan effect but looks more like Pappy Yokum, for those who know their comic strips. 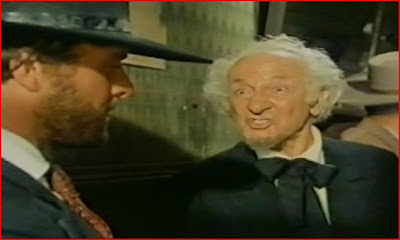 Sartana's role is to study the situation, figure out who's doing what to whom, and exploit the confusion. He messes with Lansky's head by playing a musical pocket watch left behind at the second stagecoach massacre. Poor Lansky suffers from mighty swings of mood. He feels the exhilaration of having lured some of his foes into a house full of dynamite so he could blow them up, only to lose it when the seemingly invisible Sartana opens what must be a really loud watch to spook our villain. But despite this psychological warfare, Sartana apparently likes Lansky because he's plainly decided to kill him last. Maybe that's because he figures the man with the Gatling gun is most likely to be the last man standing and the one who can lead Sartana to the gold. 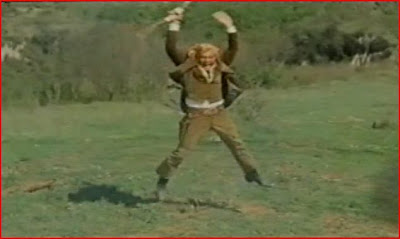 Lansky celebrates killing five men with one shot. The irrational exuberance
of William Berger in If You Meet Sartana, Pray For Your Death.

It's a good bet, because the other villains are busy backstabbing one another while trying to eliminate Lansky. Ultimately it's down to Lansky and Holman's wife, who's just done Holman in with intent to run off with the bad guy. This sets up an eerie finale in the "vestibule of the beyond" that teases a possible supernatural quality in Sartana ("I knew it!" Lansky says, "You're the d--") but finally offers a mundane (not to mention slightly derivative of Fistful of Dollars) explanation for our hero's miraculous survival. 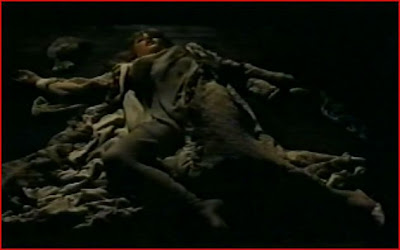 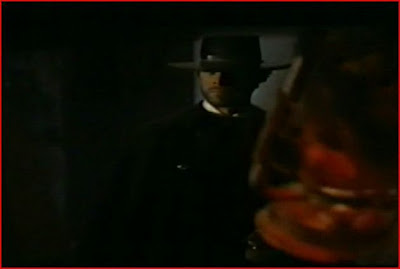 If You Meet Sartana is an entertaining start to the official Sartana series. It's a more typical spaghetti than Blood at Sundown, which aspired to the psychological depth of Fifties U.S. westerns, but it's better than average thanks partly to the large cast of villains led by the frenetic Berger. I think he's actually on screen more than Garko is, and while he never qualifies as a sympathetic character he succeeds in keeping you interested in seeing what he's going to do next. Garko does without the scenery chewing that dominated Blood at Sundown. His performance is more a matter of style than anything else. He has the look and he has the manner, and he also has some neat toys, like his little four-barreled pistol that fires one shot at a time. I don't know what good that really does him, but it's so cute! He also has a top with the suits of the card deck on it that he likes to spin frequently -- and which proves to have an important alternate purpose. 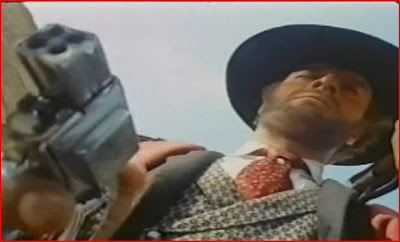 The film is part of Videoasia's Spaghetti Western Bible Vol. 2: Sartana, the Complete Saga set. Like Blood at Sundown, the Videoasia copy is improperly letterboxed and probably copied from VHS, though it doesn't have tracking issues like Blood does. The next three films look considerably sharper, since they were apparently copied from German DVDs. I'll have a review of Have A Good Funeral My Friend, Sartana Will Pay sometime next week.

And here's the English language trailer, uploaded by Mart85

Posted by Samuel Wilson at 9:59 PM

I love these movies. Sartana's definitely not heroic in the usual sense, but he a wonderfully James Bondian Spaghetti Western protagonist.

AWESOME WRITE UP, AND THESE FILMS ARE THE BEST....

Lots of love for Sartana, I see. Well, there's more to come.