Richard: You know what we Chinese say: Beware when trying to avoid stepping on the tail of the dragon, lest you trip on the claw of the phoenix and fall into a massage parlor that doesn't take American Express.
Princess: Oh, Richard, you're about as Chinese as a Big Mac! 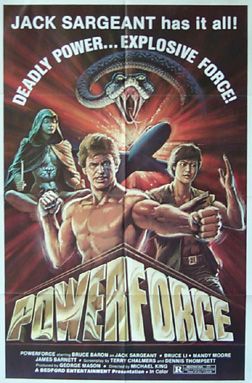 Michael Mak's film is one of the least appropriate films found in Videoasia's Dragon Immortal collection of Bruce Lee-inspired movies. It seems to be included only because Bruce Li is in it, and perhaps because the original (and more obvious) title was Dragon Force. It really has nothing whatsoever to do with Bruce Lee or his purported legacy. Instead, it occupies its own zone of zaniness that deserves its own spotlight. Like many an exploitation spectacular, it gets off to a wobbly start, but heads downhill with an inexorable snowball effect, bowling over all in its path with the sort of escalating audacity that sometimes redeems such projects.

You actually get two Bruces for the price of one in this picture. The first one we meet is Bruce Baron in the role of Jack Sargeant, secret agent for TROUBLE. Here's his opening scene, and I hope you see what I mean about the wobbliness. Jack Sargeant seems like a kick-ass fellow, but notice the way the dubbing just ends this scene with a thud.

After this exploit, all Jack wants is some R&R (or T&A). But his reverie is disrupted by an urgent summons from TROUBLE. One of Jack's girlfriends takes the call and tries to protect him. "I'm sorry," she says, "We don't have any sergeants here. We're only interested in privates." When this film tries to be funny, writers Terry Chalmers and Dennis Thompsett tend to fall on their face, but in a sort of charming way. The movie does a good job being funny without their ministrations.

To explain why Jack's been summoned, we need to backtrack a bit and detour to Hong Kong, where Princess Rawleen of Mongrovia recently arrived for a state visit, and to check in on old friends. While there, her father, the king, died in his bathtub, making her queen. This makes her a target for an ambitious subject, General Nikolai Maruschka, who hopes to become the power behind the throne and sell off the country's mineral resources to the Communists. The General is a great big fat person and as such is the source of some humor as well as menace, but there'll be more of that later. 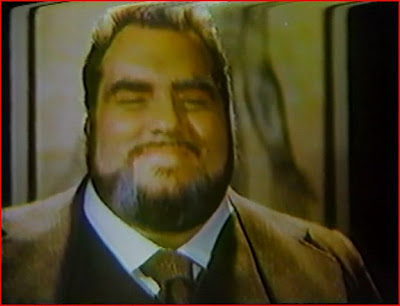 For now, it's enough to know that he sent a team of ninjas to get past the Princess's security and kidnap her out of the hotel, despite the efforts of her Tony Sinclair-like security chief.

Overall, it's probably a good thing she's out of the hotel, since that means we're rid of Richard, the boorish hotel owner whose way of making small talk is to invite the Princess inside for some fresh lines of cocaine. Hid idea of wit is to say, "You can call me Rich. I am, you know." It will be up to Jack Sergeant to rescue the Princess, but he'll need the help of Dragon Force, a secretive organization whose headquarters are known to but a few, including the man called Ah Chu, whom Jack is sent to meet. If you think that name is funny, check out some more humor at the expense of Chinese names. 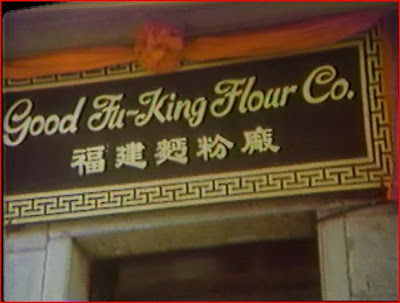 Ah Chu only reveals himself when Jack sneezes. "Did you call my name?" he asks. This guy turns out to be the "Q" of Dragon Force, or whatever the equivalent Chinese ideogram might be. He shows Jack some interesting weapons, none of which will be used in the film. More importantly, he tells him where to find Dragon Force, somewhere out in the woods. These woods are thick with martial artists: women who try to hit you with flutes; a samurai in a ceramic kabuki mask; a couple of kung fu-kicking lion dancers. These are the members of Dragon Force. 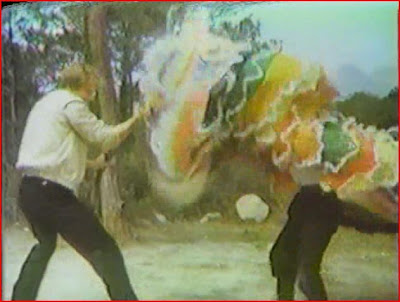 The flutist is the charming Su Lim. The head lion dancer is "the Monk." As for the samurai, "They call me Kamikaze. I'm from Japan!" Their leader is Tao Lung (Bruce Li), a pole fighting specialist who obliges Jack to perform a final test of spearwork before he receives his own personal Mao suit and becomes a member of Dragon Force. 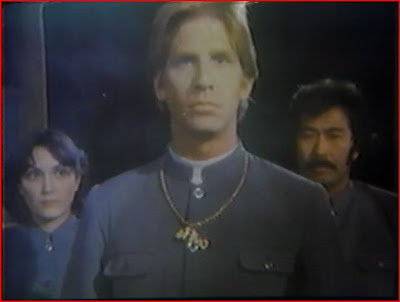 Actually, I suppose it's a cross between a Mao suit and a Nehru jacket.

Nikolai's ninjas launch a second attack at the hotel, kill the Princess's security chief, and wound Jack with a poison dart. Ninja quality deteriorates rapidly from here, but for now we have Jack's health to worry about. Tao Lung, fortunately, knows that snakes can counteract ninja venom, leading us to pretty scenes of the snake nibbling at Jack's open wound. 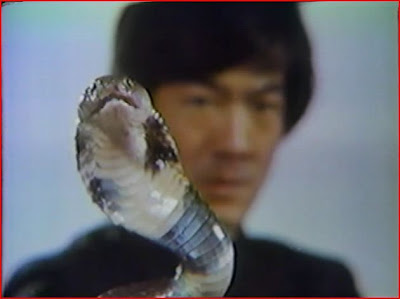 Was Power Force meant to be in 3-D? Certain scenes look like they might have been filmed that way. 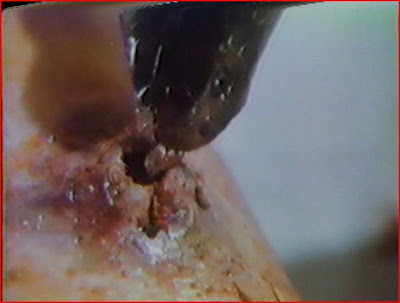 While Jack recuperates, Su Lim gets herself hired as a nightclub singer in an attempt to seduce Yang, Nikolai's boozy minion, and plant a tracer on him. This results in a comedy kung fu sequence in which her attacks have no effect on the sozzled villain until she applies the business end of a rickshaw to his privates and dumps him in the harbor. Mission accomplished: Dragon Force is able to trace him back to Nikolai's lair, where the princess is being put through an ancient ritual combining acupuncture and body painting that will render her a mindless thrall to the general. This is what we call an homage to Kwaidan, and you'd have seen something similar around the same time in Conan the Barbarian, except for the full frontal female nudity. 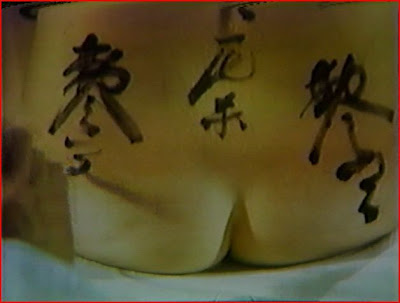 The procedure is in its final stages when Dragon Force storms the compound. Fortunately, Nikolai has both hot and cold running ninjas on his property. It's a positive infestation of the little buggers, as much a signature nuisance of the era as the Mediterranean fruit fly. But these aren't the high grade ninjas who successfully carried out the kidnapping. These fellows seem to exist for one reason: to die at the hands and feet of Dragon Force.

To be fair, I suppose they also exist to buy time for Nikolai and his main minions, including the chastised Yang, to escape with the Princess. Nikolai himself has some difficulties. He doesn't fit through one doorway until he's shoved through, and and he can't squeeze his way fully inside the escape helicopter until somebody whomps him on his fat ass with a nail-studded club. He endures it all with good grace, all things considered, and Dragon Force is left bloody-and-empty handed.

The general's party retreats to Maruschka Island, his own little kingdom where blond, barefoot karate champions "of some place or other" wait on the head table. This is one of those instances where the filmmakers can't keep track of what they're doing. Just like none of Ah Chu's inventions are put to use (probably a good thing when it comes to his atomic bomb), so these karate babes are built up as something formidable for Dragon Force to fight, but the battle never happens. They don't even get to punish Yang, apart from keeping him from running away when the real punisher appears. 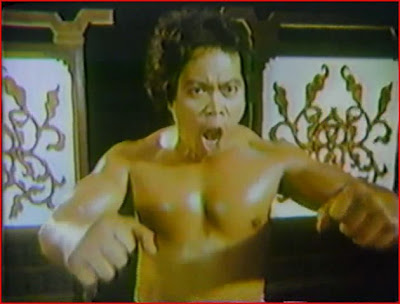 Wouldn't you want to run? Believe me when I say the stills don't do justice to this guy. At first I thought he might be the missing link between man and Bolo Yueng, but in time I reconsidered. I now think Bolo's the missing link between man and whatever this guy's supposed to be. As the Princess watches baldly and impassively, Mr. Whatzit dispatches poor Yang, who had a certain joie de vivre that we'll miss hereafter. 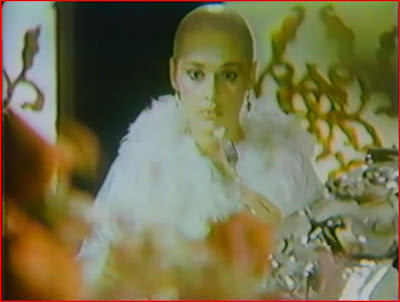 Now determined to finish off Dragon Force, Nikolai boldly invites them onto his island. Their arrival has something of an Enter the Dragon meets Apocalypse Now in the Bermuda Triangle quality with a little high-school Fellini thrown in. It isn't long before the decisive battle breaks out, with The Monk defeating Mr Whatzit with disappointing ease as a general melee erupts around them. 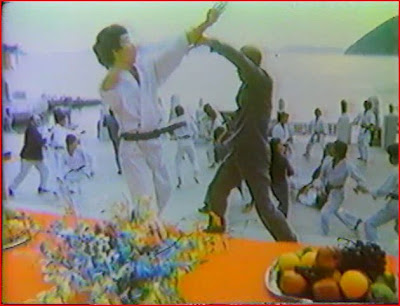 Nikolai decides to take his leave, with the Princess in tow, along a predetermined path to a waiting motorboat. It'd have to be predetermined, wouldn't it, for the ninjas to have their routines rehearsed all along the route? This is really where the picture just rips the top flap right off the envelope of ninja silliness. Did the filmmakers really expect anyone to be intimidated by ninja cheerleader formations, for instance? 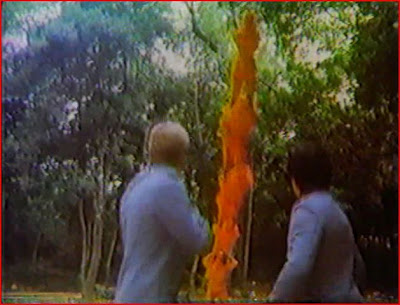 The viewer empathizes with Jack and Tao Lung's mounting impatience with each new wave of ninjas as they swoop down from the trees and burst out of the earth. Drastic measures are called for, so Jack starts cutting heads, extracting viscera, and lopping limbs. The ninjas respond in kind with their adorable little bombs -- but boys! You made the fuses too long! That means when you throw them, Jack or Tao Lung can bat them right back at you and... 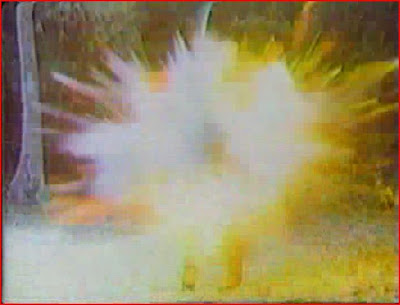 Oh, forget it. This sort of thing happens about half a dozen time before the ninjas learn their lesson. And while there's still Nikolai to run down and the Princess to deprogram, Power Force has climaxed in a giddy paroxysm of destruction for its own sake that may well justify your patience during the early meandering part of the picture. I ended up admiring the movie for its joyous abandonment of restraint and its almost instinctive understanding that the answer to any plot problem is as simple as more. Bad exploitation films are exploitative because they make little or no effort to fulfill our expectations once they've conned us into the theater or the purchase. Power Force more than fulfilled my admittedly low expectations, and its imperturbable stupidity might win others over, too.

Posted by Samuel Wilson at 9:41 PM

There's something rather likable, and even charming, about these low budget films and especially of this kind.
Great review if I may add!

WOW! I have to see this, I saw that Cinema De Bizarre had this and I passed it up. I will now add it to my next order.

Classic Maiden: What I like about films like this is their naive enthusiasm, especially when it seems like everyone is doing the best they can, limited talent notwithstanding. Thanks for writing.

Rev: I hope Cinema De Bizarre has a better copy than the pan-&-scan VHS-derived material Videoasia usually resorts to. You want to make sure you're not missing any ninjas on the far sides of the frame.

Fat priest, you will make excellent target practice for my pistol.

"But General, they already beat the poopydoo out of us."


Both lines from "In Sword We Trust". Absolutely the most hilariously baaaaaaaaad martial arts movie ever. I'm pretty sure it was dubbed into English by a bunch of surfer dudes from SoCal.

I can attest to the dreadful dubbing of In Sword We Trust. The line I remember is an insult to a particularly obsequious toady character -- "Your nose is brown!" The film, as I recall, is typical mid-1980s stuff set in the 19th century with the British as the bad guys. Has anyone else heard of this?