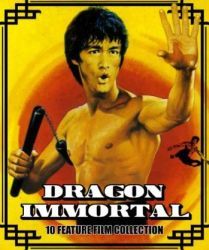 A public library ought to base its DVD collection at least as much on historical interest as on entertainment value. As historians may well ask what possessed moviemakers around the world to exploit ruthlessly the memory of Bruce Lee, it's fitting that the Albany Public Library has made VideoAsia's Dragon Immortal 10-movie set a part of its own collection. It can't help but look like a pact with the devil, given the company's reputation as a poacher of international film and a purveyor of dubious dupes off of well-worn tapes, but let's face it: the people who stocked the museums of Europe and America with the treasures of Greece were kind of like pirates themselves -- and that's the closest I'm going to go to comparing Brucesploitation to the Elgin Marbles.

There had really been nothing like it since the days of Charlie Chaplin, and there really hasn't been anything like what they did to Chaplin, since he was still very much alive when actors like Billy West started imitating his tramp character. On the other hand, West didn't change his name to Charlie Caplin or Chaz Chaplain or -- you get the idea. It might make more sense to compare Brucesploitation to the folk phenomenon of Elvis impersonation that followed Presley's death. But while that was probably more spontaneous and based in the grass roots, I don't get the impression that actors volunteered to be billed as Bruce Le or Bruce Li. Did Bruce Lie occur to anyone? Brucesploitation is more like if Col. Tom had sent someone named Alvin Pressley or Elvis King out on the road in 1978 -- and even more like if other people did it without asking the Colonel. It's hard to say whether Brucesploitation is a unique tribute to Bruce Lee's meteoric stardom or an indictment of the global exploitation industry.

What was the object, anyway? Did anyone actually hope to convince ignorant moviegoers that they were seeing new movies by the actual Bruce Lee -- apart from Game of Death, that is? Or had Bruce Lee already become so mythic a figure that producers could tell new stories about him and his legacy like folklore? Or was Bruceploitation a simple promise to kung fu fans that they'd at least be offered the next best thing? There's a little bit of all that in most of the Dragon Immortal offerings.

The library has had the set for at least a month, but I was waiting for it to be available for a weekend. As it happened, Mother's Day weekend made it impossible for me to watch all the films, but I did watch four in their entirety while sampling most of the others. I'm going to do full-length reviews of two movies, but I want to summarize the set as a whole here.

The Clones of Bruce Lee may be the definitive Brucesploitation title, and since I have it in other sets, I skipped it this time. I also avoided The Story of Chinese Gods because simply including a character based on Lee in a cartoon fell short of true exploitation. Bruce's Way of Kung Fu is another big cheat because it's a period piece about an evil king with 18 female warriors. It counts as Bruceploitation because one of the imitators stars. I can tell you even less about Bruce Lee's Deadly Kung Fu and Bruce vs. Snake in Eagle Shadow.

Fist of Death is double exploitation because it includes a performance by one Jackie Chang as a comical specialist in drunken boxing. The Brucian star is Tong Lung (aka Kim Tae-Jeong), best known for being the real Bruce's double in Game of Death. In this item, gangsters seem to be manipulating a feud between a martial arts school and the dreaded Y.M.C.A., killing the master of the former and framing the latter by using one of their trademark daggers as well as killers in uniform. Both dagger and uniform say "Y.M.G.A." but the dubbing says otherwise. The school is also torn, post-master, by a struggle for succession, one of the strugglers being a stooge for the gangsters. Here's a clip of the heroes in a friendly fight.

Fist is reportedly a Korean film, while Bruce's Fist of Vengeance hails from the Philippines. This one is from the sub-genre of "Bruce Lee's Secret Book" that I first encountered a few months ago in the crapopulent Kung Fu Fever. In this version of the Brucian revelation, the book is, as far as I can tell, just a further elaboration of jeet kune do. Jack Lee is a trusted pupil who brings the book to Manila to bolster the flagging morale at Peter's (Bruce Le) martial arts school. Peter just got his butt whooped by Filipino master Miguel at the last tournament, staged in a college gym for an audience of a few dozen people. Not content to rest on his laurels, Miguel wants the book for himself, repeatedly sending minions (and occasionally seductresses) to Jack's hotel room to wrest the precious tome from him. When seduction fails, the disappointing floozy is strangled and drowned. It's not until Jack actually hands the book over to Peter that Miguel, in a rare fit of common sense, has someone just shoot Jack down. This decisive strike follows a lengthy digression that sends Peter and his girlfriend to the local cockpit for a night of gambling on mortal combat between roosters. Pete le flambeur gets a winning streak going while doom closes in on his friend. But you couldn't have vengeance otherwise, could you? After some terrible acting in Jack's death scene, Peter storms Miguel's mansion to reclaim the book, leading to an extremely extended fight scene that ends up in a water fountain. Bruce Lee must be turning in his grave to see how well the last men to read his secret book put its lessons to use, since after a while in the water it may as well be a Toughman competition. Yet director Bill James thinks it's all so awesome that there have to be instant replays of key moments.


Bruce's Fist of Vengeance is almost hypnotically bad. The terrible acting is complemented by dreadfully paced direction and an inane script. Part of its charm comes from the soundtrack credited to Totoy Nuke, who apparently has very strong and detailed memories of the music from Enter the Dragon, The Sand Pebbles, Cleopatra and other films. But before you conclude that we've tasted the dregs of Brucesploitation, let me introduce you to They Call Him Bruce Lee. Also from the Philippines, it is regarded as an older film than Fist of Vengeance, given a 1979 release date while Fist is dated to 1984. But I think Fist has to be the older film, because They Call Him Bruce Lee actually reuses part of the plot and part of the film itself, namely some of Jack Lee's hotel room fight scenes. Given how lousy those scenes are, you get an idea of how desperate an affair They Call Him is. Another argument for it being a later film is the fact that Bruce Lee's secret book is now an exposition of ninjitsu, as this purportedly comical clip explains.

That bit was original to They Call Him, but this one isn't.


Even though I looked at They Call Him first, I decided that Fist of Vengeance had to come first because it has several scenes filmed in that same room --unless, Bruce help us, Fist is based on outtakes from They Call Him. While I feel certain that They Call Him is the worse film, I can't verify it, because on two different nights I made the mistake of trying to watch it too late in the evening, and it put me to sleep before the ending. That may be significant.

I'm leaving what proved to be the two most interesting films in the set for separate posts later this week. One of these, Bruce Lee Against Supermen, was the one I thought would be the strangest and most entertaining. That was, at most, half right, since by far the most entertaining film out of those I watched was Power Force. Come back later to find out more about both.
Posted by Samuel Wilson at 9:41 PM

The cult of Bruce Lee continues to thrive. I've got to get this set and am eager to read your thoughts on Bruce Lee versus Superman.

Thanks for your interest, Archavist. I should be posting that review on Thursday night. That film is so wrong on so many levels, however, that it's a challenge to wrap one's mind around it.