A Viewers' Guide to IF FOOTMEN TIRE YOU, WHAT WILL HORSES DO? 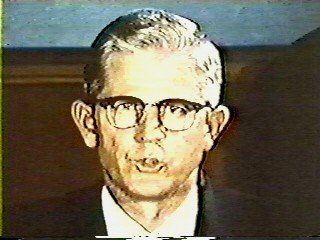 Ron Ormond's film adaptation of Rev. Estus W. Pirkle's If Footmen Tire You, What Will Horses Do? approaches a level of amateurness that gives the 52-minute jeremiad a kind of naive authenticity, as if we had leaped directly inside the troubled brain of either Ormond or Pirkle and could share his delusions -- within a budget, of course. It shouldn't surprise us, then, if some aspects of the film don't quite make sense.

Who is the enemy, for instance? In the section of the film that rips off James Clavell's "Children's Story," it's implied that Fidel Castro will become the ruler of the United States. How would that have happened? Could Cuba have invaded and conquered the country itself, or would Fidel be set up as a satrap by Russian overlords who did the dirty work? We can't tell much from the Commie soldiers shown on screen. There's occasionally a hint of Bela Lugosi in some of their utterances, but as a rule their speech bears little resemblance to either Cuban or Russian accents. The actors operate on the assumption that slurring their native drawls will make them sound foreign. Here's a sample:

For that matter, why are they so often on horseback, as at the start of the picture when they seem to be playing tag or counting coups on some hapless American teenagers? The best explanation I've seen is that Ormond meant a literal illustration of the "horses" part of the title. The Commies have trucks and machine guns when they need them, but just as often ride horses and carry swords, the better to cut heads with. They seem too impoverished to be an effective occupying force, but that impression may be intentional.

Pirkle makes a point of distinguishing between the predicted Communist persecution of American Christians and the time of Tribulation predicted in the book of Revelation. He rejects the idea that these disasters can't happen until Jesus comes again. Without using the word, Pirkle is telling his audience that the Rapture won't save them from the Commie takeover he expects, absent a religious revival, within 24 month of the film's premiere. In one of his few genuinely sensible utterances, he reminds people that it wasn't the Tribulation when Communists were decapitating kids, jabbing bamboo sticks in their ears, and force-feeding salt to people in other countries. That doesn't mean he doesn't see divine providence at work in these misfortunes. Quite the opposite. Pirkle's presumption seems to be that a Christian nation can fall to Communism only if the people backslide and lose God's favor."My concern is that God may leave us behind," he worries, "Every nation that violates God's day as America does has been destroyed." Just as Jerry Falwell suggested that the terrorists succeeded in 2001 because God had refused to protect a sinful nation, so Pirkle predicts a worse fate for a nation too easily distracted by cartoons from reading the Bible.

How credible is Estus Pirkle? He claims that all the appalling incidents Ormond films are based on documented evidence, but he never attributes anything. He never says where any specific incident happened, or to whom. He won't tell you how he found out that the Commies intend to kill 67,000,000 Americans once they take over. And his mere assertions of fact are shaky. Attempting to show how Communists proliferate with "jet age speed," he remarks: "Are you aware that less than sixty years ago there was not one Communist in the world?" Sixty years ago to Pirkle was 1911, a year when Lenin, Trotsky and Stalin, to name three, were alive and active. Either Pirkle doesn't know his enemy, or he counts as "communists" those conquered by communism rather than those who espouse it.

Pirkle's credibility may also be shaken, on the level of psychological analysis, by such statements as "Dancing is just as wrong as it's always been....It's the front door to adultery." In many ways, Footmen seems much older than it actually is, and I don't just mean the poor picture quality of the Google Video available below. There's something archaic about it to go with Ormond's primitive direction. Listening to Pirkle, you realize that the Taliban are not that far behind some Americans on the civilization scale. When I wrote last night that the film is unintentionally horrifying despite the makers' clear intent to horrify people, what I thought might trouble people who look at Footmen today is the pure fact that people actually believed and felt this way in America less than forty years ago. But don't be too spooked. There are plenty of unintentionally hilarious moments too, including most of the violent ones. For instance:

If these don't tire you, try the complete film posted below.

Posted by Samuel Wilson at 9:52 PM

"I guess if Jesus died on the cross for me, I can die for Jesus."

I believe his name was Comrade Bilkov.