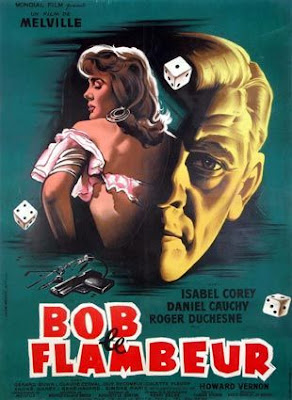 In a 2002 interview for the Criterion Collection DVD release of Jean-Pierre Melville's career-defining caper film, actor Daniel Cauchy relates that Melville made an unusual request when the time came to film a climactic gunfight. The director asked Cauchy to throw himself backward when he was supposed to be hit. Cauchy had never heard of such a thing. Actors pretending to be shot, he explains, always clutched their stomachs and crumpled to the ground. But Melville insisted that people hit by bullets were actually thrown backwards. To this day, he told the interviewer, Cauchy had no idea where Melville got the idea, though he suspected that the director must have heard of this phenomenon from an army veteran. But Cauchy has just spent time telling us how obsessed Melville was with American movies, how comprehensively knowledgeable about them he was. We're talking about a movie filmed over a two-year period before a 1956 release. So I was practically yelling at the screen, "SHANE, fool!"

Cauchy compromised with Melville, agreeing to throw himself backwards if Melville would also shoot a take in which he clutched his stomach and fell down the traditional way. The director ended up using the traditional take. Hearing this story helped clarify my opinion of Bob le Flambeur, because it was proof of a kind that we weren't yet getting the full Melville. Maybe it's because Melville hadn't yet gone widescreen. Maybe it's that the music seems more omnipresent and insistent than in his later films. And maybe it's what struck me as a more sentimental attitude than I'd come to associate with Melville. I liked the movie, but coming to it from experience with the director's later work, I thought it lacked something characteristic. 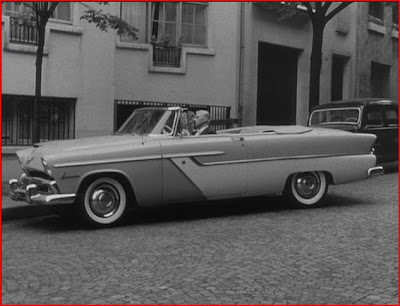 "Bob le flambeur," what we'd call "Bob the high roller," is Robert Montagne (Roger Duchesne), an old school gangster whose hobby is gambling. He keeps a slot machine in his closet, but has never hit the jackpot. He isn't good at gambling, but he must have been good at something, since he's clearly a man of respect in the Rue de Pigalle and the Montmarte neighborhood. Despite his losses, he's also clearly a man of resources. He's the man whom Marc, a local pimp, sees when he needs "a hundred clams" to get out of town. But Bob doesn't like pimps. He shoos Marc away from Anne, a potential recruit to whom Bob himself takes a liking. Without Bob's help, Marc has to throw himself on the mercy of the police by promising to be a stool pigeon. 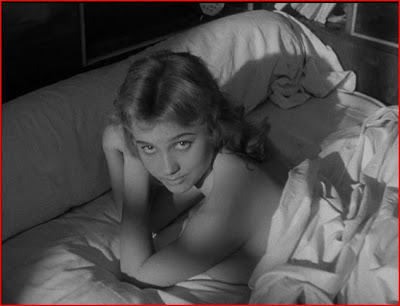 Isabel Corey was 27 at the time of Bob Le Flambeur's release according to IMDB, but Daniel Cauchy claims that she was only 15 when they started filming. Judge for yourself.

After a busy day of gambling in which he wins at the race track only to blow everything at the casino, Bob's made aware that the casino keeps up to 800,000,000 francs in its vaults on big race days. He gets the odd notion to steal all the money and starts putting a team together, including an ace safecracker and his young protege Paolo (Cauchy), who has hooked up with Anne. Paolo and Anne are young, personable and dumb. He boasts to her of the money he'll make from the casino robbery, and she boasts of that to Marc, who's still trying to make some moves on her -- not without success, either. But the speed with which Marc takes off makes her suspicious and worried that she's made a mistake. She goes to Bob, who gives her a good slap but appreciates that she went to him quickly. Marc did go to the cops, but he stalled them by saying he needed more details. That means the cops don't know the full story by the time Paolo catches up with Marc and kills him. 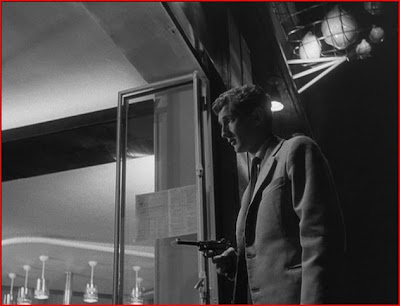 But the cops learn more when a croupier who'd provided inside information on the casino is goaded by his nosy wife into demanding a bigger cut of the loot. Failing to get satisfaction from Bob's gang, the croupier goes to the police. The inspector is actually dining with Bob at the time and warning him to stay out of trouble. But it's only a matter of time before the cops know what's up. Will Bob's gang be able to keep on schedule, especially when Bob himself forgets the schedule during an unprecedented run of luck at the roulette and baccarat tables?... 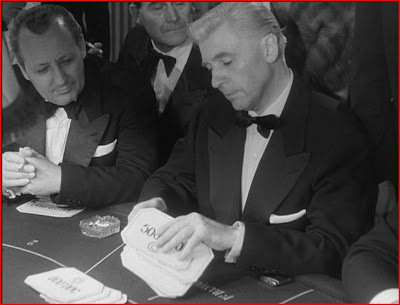 With every French crime film I see I'm better able to distinguish the prevailing sensibility from the American hard-boiled and noir styles. The hard-boiled style is defined by its insistent mocking humor, as if grounded in a philosophy that life is a big joke on everyone. Film noir is marked by a fatalism that often verges on self-pity. The French genre seems comparatively less jokey and less sentimental. The typical tone is something like a cold-eyed sense of tragedy, expressed in Bob Le Flambeur when Melville the off-screen narrator describes Bob as "just as nature made him" when his gambling fixation screws up the casino caper. In American noir there's a sense, perhaps insisted upon by the Production Code, that things could have been different for the genre's doomed protagonists. The French seem to think differently; Bob's story could only end as it does, because of Bob's nature.

The odd thing about Bob Le Flambeur, however, is exactly how it ends. If you've been following along, you've figured out that Paolo, Bob's young protege, gets gunned down in the climactic gunfight outside the casino. Bob himself seems to be to blame because of his lucrative dithering at the gambling tables. If you found Paolo sympathetic, you might want Bob to get some comeuppance. Indeed, he is arrested at the end, but all that money he won was won fairly, and is his to keep. Bob may end up facing no more than 3-5 for his role in the scheme, and as the script notes, he can now afford a really good lawyer. His last word is that he may even go on to sue the police! Something seems wrong here, at least to an American viewer. Maybe Melville has found Bob too lovable to suffer the sort of ruin that seems more appropriate here. The director and co-writer keeps less emotional distance from Bob than from his later protagonists, and that may be why this movie, for all its virtues, seems less rigorous than Melville's work from the 1960s and 1970s.

That said, the film is still very much characteristically Melvillian. It has plenty of location atmosphere, and the actors are effective even if not on the level of the titans Melville would work with later (Belmondo, Ventura, Delon). Bob is not as tense as the later Melville films I've seen, simply because Bob is a less edgy character. But the movie reminds me in a good way of American doomed-caper films like The Asphalt Jungle and The Killing, the former of which was apparently an acknowledged influence. And it has one element that must have been indispensable to a Melville crime movie: a nightclub with a floor show. 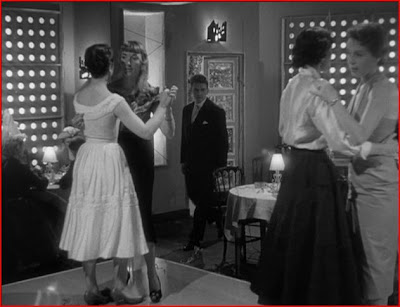 I'm sorry. That was just a photo taken on ladies' night. Here's the floor show. 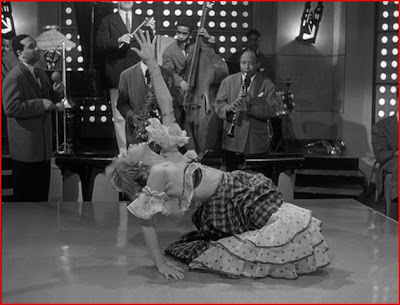 Anyway, if you have your choice of Melvilles, check out this one if you want to follow his career in historic order, but if you want the really good stuff, go for Le Deuxieme Souffle or Army of Shadows. Bob Le Flambeur is merely good, but the others are great. I'll let the trailer make its case, including an extraordinary claim for Isabel Corey in the year of Brigitte Bardot's emergence into superstardom.

Posted by Samuel Wilson at 9:29 PM

What a great review and you really made some great points. I think what drew me, personally, to this film was that I really needed to see some of Monsieur Melville's earlier work and this one was a prime example of his earlier work, being an early example of what led to the French New Wave.

Thanks for posting. I was drawn to Bob for the same reason, and because it has a reputation as the film that made him as an international figure. I have Le Doulos and Le Samourai in my possession and will be looking at those soon, and I'd really like to get hands on a copy of Deux hommes dans Manhattan.

If you need to locate a copy, just email me!