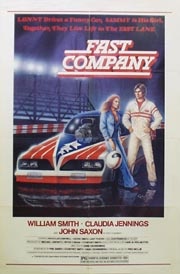 You'll please forgive a lack of screen captures for this one. The Albany Public Library DVD behaved a little hinky on my living-room player, so I didn't want to put it in my computer's drive. As you see from the trailer, it's a car racing film with a stalwart-looking 1970s B-movie cast. It's better known now as an early film from David Cronenberg, and it's definitely the most cartoonish film he made until A History of Violence. It's also a film sure to touch the heartstrings of auteurs and their fans everywhere for its opposition of the pursuit of excellence to the corporate obsession with the bottom line.

Fast Company is the story of Lonnie "Lucky Man" Johnston (William Smith), something like a living legend among fuel-car drag racers. He drives for the FastCo fuel company team, and answers to corporate scumbag Phil Adamson (John Saxon). Adamson flies around in his own helicopter and likes the perspective it gives him. "They crawl, we fly," he tells Candy Allison, the new Miss Fastco (Judy Foster) as they hover above the Fastco caravan, "but sometimes the hired help don't like to be reminded." The race team exists only to promote the Fastco brand. Whether they win or not doesn't really matter to Phil. In fact, "Winning is too expensive." He's content if the cars are just competitive, but Lonnie and teammate Billy the Kid don't agree.

When Lonnie's car explodes (he luckily survives unhurt), Phil wants to cut a replacement dragster out of the budget and make Lonnie race the funny car, bumping Billy out of his spot behind the wheel. Facing both men's discontent, Phil schemes to replace them with Gary "the Blacksmith" Black, an ambitious driver who resents Lonnie's fame and apparent complacency. Gary is often obnoxious, but his mechanic, "Meatball," is downright vicious. Phil manipulates these people to the point where he has them plotting sabotage, if not murder, when Lonnie, Billy, Candy and their mechanics all quit (or are fired) and form an independent race team. The climax comes at a nighttime meet where Lonnie's luck may mean Billy's death unless Gary acts on his suddenly conscientious suspicions of the people around him....

It may be the late Seventies, and it may be Cronenberg behind the camera, but apart from some topless scenes (Billy pours a can of Fastco on a hitchhiker's boobs; she says, "My boyfriend will kill me, he hates Fastco!") this tale could have been told pretty much the same way in the Thirties or earlier. This is pulp cinema, with none of the ambiguity you'd expect from Seventies cinema. Lonnie and his pals are the good guys, and Phil is vile and evil. The heroes win and the villains get a hot dose of what they deserve.

You would have gone to Fast Company to see the racing or the stars. William Smith again proves that he's more a character actor than a leading man. He has a certain innate charisma, but I don't think he ever figured out how to project it apart from playing crazy brutes (see my review of Piranha, Piranha, for instance). He's pleasant enough here, but notice that Cronenberg has the Billy character carry most of the romantic load. That leaves third-billed Claudia Jennings with little to do in her final film role. She plays Lonnie's loyal wife, and that about sums it up. It's a disappointing coda from one of the pioneer action heroines of the decade, whom I know more by reputation than from seeing her major works. The mighty John Saxon is obliged to give a one-note performance as Phil and succeeds in making him thoroughly hateful. He can project his charisma, however, and he dominates everyone else whenever he's on the screen, except when Smith punches him down a flight of stairs for calling Lonnie's truckborne living quarters a "goddamn whorehouse" and "an insane asylum."

The Saturday matinee storyline is an odd fit on Cronenberg's atmospheric portrayal of the racetrack milieu and the details of fuel car racing. The more documentary moments have the vibe I was hoping for from the film as a whole. I don't mind a movie having a silly story and solving all its problems with fiery violence, but Fast Company is ultimately a little too mundane. I may be jaded for faulting a film that ends with a man on fire and a chopper crashing into a truck, but there was something perfunctory about the finale. Cronenberg did not take the story to "eleven" the way an exploitation film needs to, but with the story he was given he had no choice but to try, since the melodrama had surrendered any claim to realism. For that matter, going over the top may have been too expensive for the producers, just as winning was for Phil. Having said this, if you like redneck cinema in general, albeit set in Canada and just across the border, this show should push enough of your buttons to get by.

Posted by Samuel Wilson at 9:04 PM