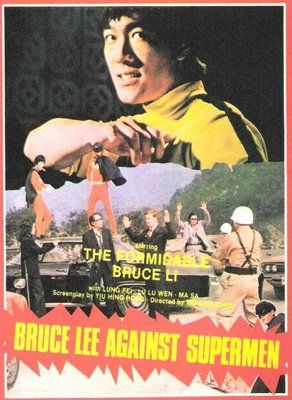 Former Hong Kong child star Bruce Lee achieved mature stardom in the role of Kato, masked chauffeur and all-around henchman of the Green Hornet in a 1966 TV version of the old-time radio program. It lasted only one season but was a big hit in Hong Kong, so the story goes, under the title The Kato Show. This enabled Lee to begin his starring career in feature films. Kato, therefore, was an iconic figure for Asian audiences. For that reason it was inevitable that the "Brucesploitation" genre that emerged following Lee's death would appropriate Kato's image. Now that we've established that fact, all bets are off.

The origins of the film presented in the Dragon Immortal box set as Bruce Lee Against Supermen are mysterious. The Internet Movie Database denies the existence of such a film. The closest thing to it in their filmography for star Bruce Li is a 1977 release called Superdragon vs. Superman. Other sources date the film under the title we know to 1975. That title is certainly one of the most misleading ever used. It's one thing to invoke Bruce Lee in your title; that's standard practice in Brucesploitation. It's another to suggest that Bruce Lee is either starring or a character in the movie. As for the other part of the equation, ... we'll get to that in due time.

C. C. Wu's production opens with a pre-credit car chase, during which criminals toss their swag practically into the laps of a tourist couple. They hardly have time to marvel at their luck before they are rebuked by a masked gentleman in the black livery known to millions. This as yet unnamed person confiscates them and their money and drives them to the police station. The opening credits roll. 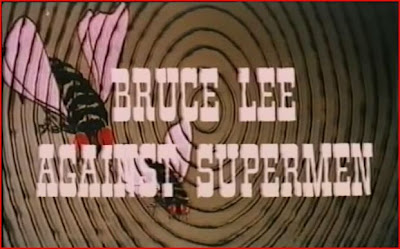 Post-credits, the masked chauffeur deals with three antagonists. We then see him at ease in what must be Green Hornet headquarters. Here our hero (or assistant-hero, I suppose), can slip into something more comfortable: a red superhero costume with a green hornet logo. It's the club uniform apparently, and for some inexplicable reason the club has at least three members. I could swear I saw three guys when there are normally only two, Sith-style, and all in the same casual attire. Then the telex lurches to life, setting the plot proper into motion. 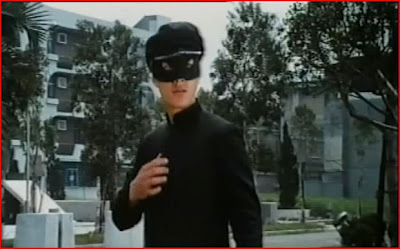 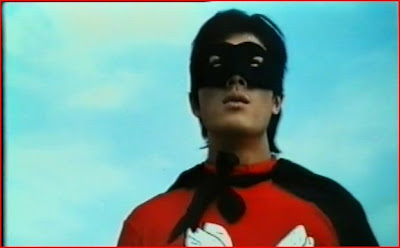 The two faces of Bruce Li in Bruce Lee Against Supermen

Professor Ting has discovered a way to synthesize food products from petroleum by-products. The resulting compound is reportedly "rich in vitt-a-minns." Unscrupulous elements want Ting's formula. They follow him to an Arab country where he inspects some likely resources under the approving eyes of Chinese actors who don't even try to look Semitic, apart from the clothes. The criminals do little at this time, however, apart from ogling the professor's daughter, Alice, as she skinny dips in a nearby pond.

While this goes on, the unmasked chauffeur, now in civilian garb, shows up at a martial arts school. He announces that, owing to an injury to the Green Hornet, he has been sent to protect Professor Ting. Here's where we finally hear his name: they call him "Carter."

This is one of those moments when you want to slap someone upside the head. Why in the blue hell did they change his name? Were they somehow afraid of copyright infringement after identifying "Carter" as the Green Hornet's assistant? Did they perhaps believe that the name "Kato" was a form of intellectual property in a way that the name "Bruce Lee" was not? Did they fear that audiences would confuse the character with Inspector Clouseau's servant?

Let it go, and let's move on. As you may have guessed once Carter declared his intent to protect the professor, Ting and his daughter are promptly kidnapped, fortunately in sight of Carter and one of his pals. An unusually orderly, sedate and protracted car chase follows. It is very time consuming, and only looks like a chase because understand that it's supposed to be. It finally ends when the good guys figure out a short cut, get ahead of the crime car, and lay themselves down in the road in front of it. The gangsters actually stop, thinking the men must be hurt. But it is they who are hurt as our heroes rescue the Tings.

"Hello, S.O.S. I need me a real good sharpshooter," the head criminal says on the phone. In short order, Carter finds himself the target of a sniper who is not really good. For the sake of variety, the film now gives us a leisurely, roundabout foot chase through the city that finally ends with the sniper falling off a building. Not knowing exactly whom he's dealing with (and I was sometimes uncertain myself), the head criminal realizes that "That Green Hornet's a real problem." Thinking aloud, he muses, "Superman? I'll get him! He can fix Green Hornet, I'm sure."

Far away, in a dark fortress of solitude, a weird caped figure practices his super calligraphy. With every leap and flip comes a new brushstroke, until a complete statement is visible. Written in Chinese characters, it is completely incomprehensible to me. The caped figure reads his own handiwork and laughs maniacally. This is Superman, rocketed to Earth from the planet Crip Tong and endowed with powers indiscernible to mortal men. That's my theory, at least, but the film itself makes no effort to explain why a man in black tights and flimsy white cape with a troupe of half-mimes, half-ninjas in tow should either see himself or be seen as a Superman, much less the licensed property of DC Comics, a Warner Communications company. 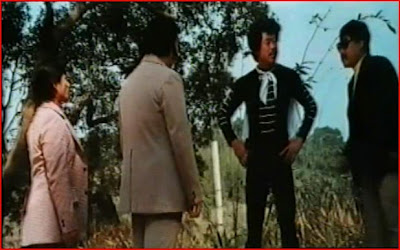 Superman (second from right) considers a rich offer to fight "Bruce Lee" later in the picture.

Still, Superman demands a high price for his time and trouble. The criminals offer "$400,000 cash, ten girls, and a truckload of booze," paid for by foreign backers. "That's not bad," Superman admits, "Foreigners are generous." His employer is less sanguine. "Foreigners are nothing, but very rich. Nothing upstairs but their big fat wallets." Yeah, but their money buys you Superman, ingrate! And isn't he kind of a foreigner himself, jerk? 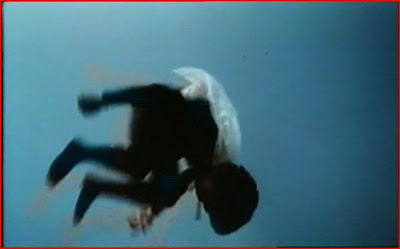 You will believe a man can fly -- please?

But was that purchase really necessary? It seems like all the gangsters needed was a woman to seduce Carter while another band of miscreants re-kidnaps the Professor. It's only when Alice bursts in on the seduction and incites an ill-choreographed catfight that Carter realizes that he's made a tactical mistake. By the time that sinks in, Ting has been subjected to the dread torture
of hot lights and hair pulling. Screen distortion allows you, the audience, to share in the doctor's agony. Alice can only imagine it, but it can't possibly magnify her present disdain for Carter. "What can you do but kung fu?" she sulks.

When the criminals negotiate a deal so that Alice can bring her father the medicine he needs to keep alive, a chagrined Carter follows their car by pulling a rickshaw at something like super speed. This finally sets up some successive showdowns, first with a pack of gibbering minions who throw frisbees at one another and threaten to taunt him to death. 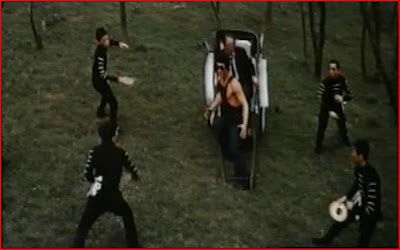 And then finally with Superman himself, who displays the powers of jumping, flipping, kung fu and knife fighting. The only special effect at his disposal is the ability to reverse film, enabling him to leap upright out of the water and onto a ledge several feet above. The entire climactic fight is pitched on this level of ordinary. No one walking into Bruce Lee Against Supermen, no matter what they might have expected, expected the big battle to come down to knife thrusts, but it does....


As I wrote a few days ago, I picked up Dragon Immortal collection from the Albany Public Library expecting Bruce Lee Against Supermen to be the highlight of the set. Instead, I was only amazed by how brazenly lame it was. This is the kind of effort that gives exploitation a bad name. Either the original producers or the American distributors, or both, seem simply out to put one over on the gullible public. It's the sort of show that almost needs a square-up reel, though the producers do make gestures in that direction with the skinny dipping, the catfight, and a near-rape scene involving Alice and a sweaty white guy. 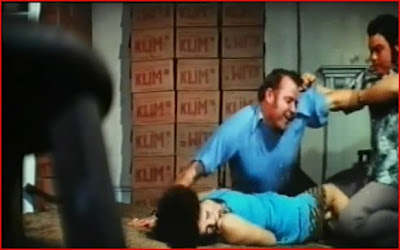 Nor is Bruce Lee Against Supermen on the mesmeric level of ineptitude that makes something like Bruce's Fist of Vengeance fascinating and unpredictable. It's nearly the worst thing that any exploitation effort can be: utterly mediocre. It hasn't even the Turkish gall to show what it promises: a fight, let's say, between a dude in a yellow track suit and a guy in a genuine Superman costume, or guys with some sort of superhuman powers. The pure scandalous idea of the film as a great ripoff of U.S. pop culture is really more entertaining than the actual movie.

* * *
Next in the Library of Classics series is the remaining film from the Dragon Immortal set, and the real highlight of it -- Power Force: Coming Soon to this blog.

Posted by Samuel Wilson at 9:48 PM