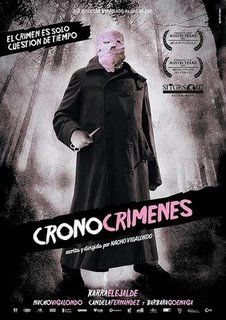 When people think of Spanish horror today they're probably more likely to think of Guillermo del Toro and films like The Orphanage rather than of Paul Naschy or the Blind Dead. What about Spanish science fiction? Actually, I hadn't thought of it lately, and I don't think many people have outside the country, or in it. As far as I know, Nacho Vigalando is blazing his own trail with his low-budget time travel story, though it has a hint of horror to it. If you think of time travel as closer to fantasy than sci-fi, then Cronocrimenes might fit into one or another of the country's cinematic traditions.

It's a pretty simple story with a minimal cast. Hector is married to Clara. One evening while sitting in his yard after taking a weird phone call he spies a woman taking her top off in the woods. After his wife goes shopping, he decides to go exploring. He finds the girl naked and deathly still. He throws small sticks at her to see if she reacts. Then some dude stabs him in the arm with a pair of scissors. 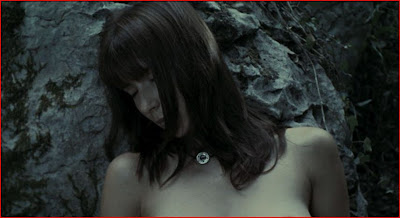 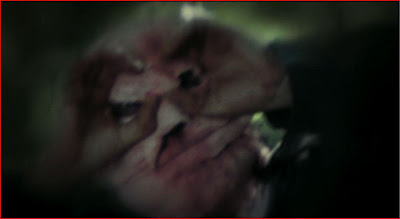 Hector runs and hides and takes a look through his binoculars. He sees a bandaged-up bloody mess of somebody miming like he has binoculars, too. Now Hector really runs for it. As darkness falls, he makes it to some building that seems to be a lab. He finds a walkie-talkie and talks to a technician who tells him to get to an adjoining silo. Inside, the guy tells him to get into some sort of tank. ZAP. A moment later, Hector comes out of the tank, and it's morning. "You've been here before, right?" the techie says, "We've seen each other before, right?" He tells Hector that it isn't tomorrow morning, but an hour before the present. That tank was a time machine. "Hector 2" coexists with his past self, but the techie says that if "Hector 1" does exactly as "Hector 2" remembers, but they keep him out of the tank, things will go back to normal and there'll just be one Hector again, as long as Hector 2 doesn't run loose and mess things up. 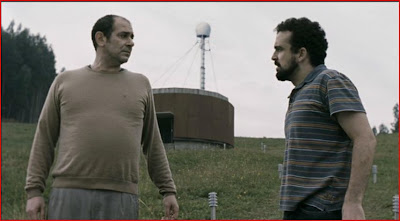 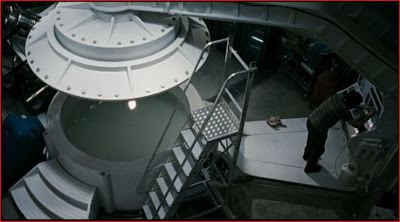 So of course he does. Hector 2 goes out for a drive and quickly finds himself destined to become the bandaged guy who chases his original self. He meets the girl and has to make sure she does exactly what he remembers so that the original Hector will follow the pattern, even while the girl is increasingly eager to escape an apparent madman. We learn that the girl wasn't dead when Hector found her naked, but that only complicates things further. Looking for shelter, she flees to Hector's house. Instead of chasing himself like he's supposed to, Hector 2 goes after the girl, but the result makes it imperative that Hector 3 come out of the tank with a head start to set things as right as possible.... 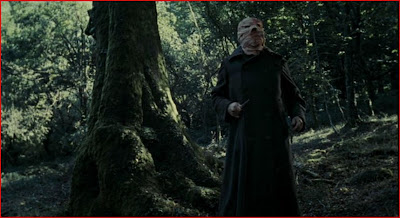 Cronocrimenes moves along with commendable clarity. You understand why the different Hectors do all the odd things they do. It all seems to make sense until you ask yourself why the whole cycle begins. Why does Hector 2 already exist at the start of the movie when Hector 1 is more or less minding his own business in the yard? There's the barest hint that the techie's mere turning on the time machine before schedule may have messed with reality, but you have to reach for that answer yourself. That hole in the plot may be enough to render the film a fantasy rather than proper science fiction, while the ending takes our hero to an amoral place that may leave scrupulous audiences shuddering a bit. But Vigalando (who plays the techie) does a good job of establishing Hector's multiplying desperation. and Karra Elejalde does a good job expressing it. The bloody, bandaged Hector is a primal scary image, though Vigalando undermines the impression a little by calling him (in the subtitles, at least) a "pink mummy." Available in an English dub as well as with subtitles as a Magnolia DVD, Timecrimes is a modest effort that effectively holds your attention for an hour and a half, though you may find yourself thinking through the implications for a while longer. 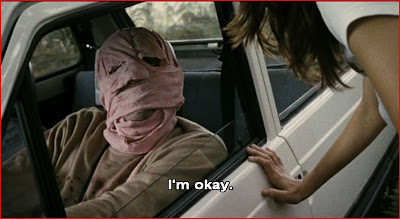 No, you're bloody well not okay, but the film is.
Here's a trailer with English titles, uploaded by trailerman123

It's not Vigalando, but Vigalondo.

By the way, Guillermo del Toro is Mexican, although he has made a couple of movies in Spain.