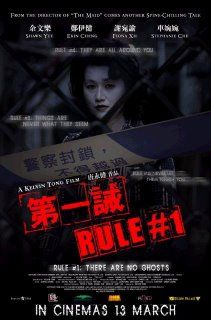 There's a moment in Kelvin Tong's spook-show that looks like a mockery of the Asian horror genre from which it emerges. Our hero is investigating eerie noises coming from a swimming pool where a child drowned recently. His supervisor tells him to go into the shallow end of the pool and check out the filter. Our hero pulls out a big wad of dark, matted hair, and the sound stops. One woman sheds hair in her tub and clogs the drain, the senior cop says, so imagine what hundreds do in a municipal pool.

Dark, wet hair, of course, is symbolic of the modern Asian horror genre dating at least back to Ringu. It's become an occasion for mockery whenever another dark, wet haired woman or child shows up in something from Japan, Korea, or other parts. Kelvin Tong himself is from Singapore, but made this film in Hong Kong. The pool episode hints at an irreverent attitude toward genre conventions that isn't really there. Rule Number One proves to be all too derivative of other movies from Asia and elsewhere.

Our hero is Lee Kwok-keung, a cop who has a harrowing experience when the driver he tickets in a parking garage proves to be a child-murderer with a little corpse in the trunk of his car. Lee gets shot several times, but before the killer can finish him it looks like the corpse comes to life and distracts the guy long enough for Lee to recover his gun and blow the bastard away. He takes a while recovering, but refuses to question his senses. He tells his superiors he saw a ghost. When he refuses to alter his report, he's assigned to the Miscellaneous Affairs Division, an obscure branch of the force that seems to have only two other people in it; a young guy in a wheelchair who builds tottering towers of blocks and the hard drinking Inspector Wong -- the man who figures out what's making the noise in the pool.

"Rule Number One" of M.A.D. is "there's no such thing as ghosts." Wong explains that M.A.D. handles the crazy calls that the force gets from superstitious people, just to keep them quiet. How that squares with Lee's experience is unclear until they deal with an old guy in a theater who's protesting against a realtor throwing him out. Wong deals with the old guy while Lee speaks with the realtor, who knows nothing about an old man. A glance at a mirror confirms to Lee that Wong is talking to no one, but then the old man breaks into a run, jump and POOF! He turns into a dark cloud and possesses the realtor, who has to be shot down by Wong before she does the worst possible thing to Lee: touch him.

Here are some more rules. Ghosts are actually all over the place, but if the public knew this, society would turn into chaos. M.A.D. uses a debunking front to cover up the truth. The great majority of ghosts are harmless, melancholy souls hanging around old haunts from life. A few are "vengeful" and malevolent. These possess people, leaving their victims vegetables after they move on. That's why Wong could kill the realtor; she'd have no life left after the ghost was through with her. Killing the current host also finishes off the ghost.

It should begin to sink in on viewers that one of these vengeful ghosts is at work in the latest Asian outbreak of Suicide Fad! Teenage girls find fun ways to destroy themselves, making sure that friends are nearby to touch so the spirit can move on to new victims. Never mind that the first such victim doesn't seem to have anyone near her when she hangs herself. Once the rule is established, things will work that way. The ghost is soon running amok in a private girl's school, leading to a scene "inspired" by Sion Sono's Suicide Club: a group of girls leaping off a tall building hand in hand. The ghost has even had time (by jumping from body to body? before some of the girls notice what's happening and freak out? and in the short time from when a possessed girl gets away from the cops to when the cops find her on the roof?) to link the girls braid-to-braid, so that the lead victim leaping drags the whole gang down to form a bloody pile below. 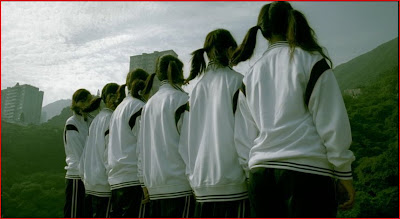 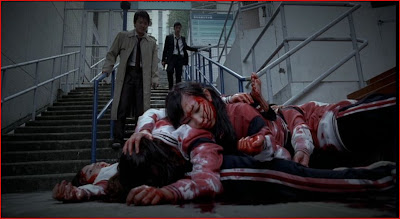 When the girls jumped, Rule Number One had pretty much jumped the shark. The notion of an evil spirit jumping from person to person was already strongly reminiscent of the American film Fallen, and actually becomes more so as the film goes on. The identity of the ghost is a neat attempt to tie things together, but is probably too neat. This film is really overdetermined by memories of past films. This is really too bad, since the film was shaping up nicely for about the first third, developing Lee's increasingly troubled relationship with his newly pregnant wife and Wong's apparently platonic friendship with a teenage delivery girl who ends up one of the ghost's victims. There's a darkly humorous bit when Lee's wife tries to announce her pregnancy by telling him that "there's someone else in the house with us," which he immediately interprets as "a g-g-G-GHOST!" Wong's relationship with the delivery girl produces some gratuitous grace notes, as when she gives him an inflatable dinosaur with his dinner. Tong may have felt that his film remained a character study and that the character development should lead us to overlook his recourse to some pretty familiar genre tropes, but after a while Rule Number One became little more than a bunch of chasing and killing with less and less to distinguish it as we neared the increasingly predictable end. This is one side street in the wild world of cinema that's probably only for Asian horror junkies only.

It's commendable of the Albany Public Library to keep adding horror titles like this one and the Norwegian Fritt Vilt (Cold Prey) to its foreign film collection, but there seems to be no selection for quality. But libraries often depend on what they're given rather than what they choose. I'm beginning to think that I could do a series of reviews based on some of the pure WTF items in this esteemed collection. While the unrated Caligula is apparently no longer part of its inventory, there are a few titles whose inclusion might surprise you. Wait and see....

For now, here's a Chinese trailer that may give you a different impression of the movie.