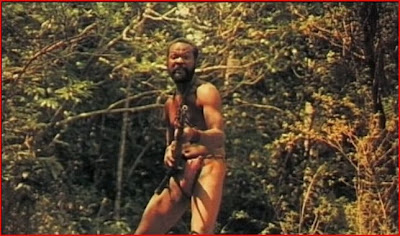 Let's imagine that Estus Pirkle's nightmarish prophecy came true and Communists conquered America in the name of Fidel Castro in the 1970s. A natural question that occurs is: how would this influence what we see in movie theaters? Pirkle himself no doubt imagined that the Reds would fill theaters with propaganda films teaching love for the Leader and hatred of God. I'm sure that there probably were hard-core propaganda films made in Cuba, but so far, on the evidence of First Run Features' Cuban Masterworks Collection, it looks like the island could produce a decent range of entertainment. Sergio Giral's film, however, does have a somewhat subtle propaganda message, and I'm sure it would've ticked off the people of Ron Ormond's Nashville if an occupying power opened it at the local movie house. 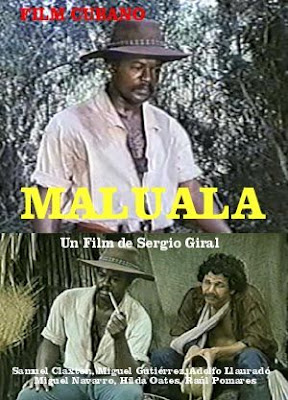 That's because Maluala is all about powerful and often shirtless black men leading a slave uprising against white rulers in 19th century Cuba. A quick check of history tells me that the main characters are real people who were active around 1819. At that time, when the island was still ruled by Spain, fugitive slaves took refuge in palenques, nearly unreachable mountain camps, each with its chieftain. Maluala is one of these palenques, but the main character of the film is actually the chief of Bumba, a neighboring camp. He is Ventura Sanchez, also known as Coba. He and his ally Gallo, the chief of Maluala, are among the most dogged holdouts against the Spaniards, who are reluctant, despite some military hotheads, to try frontal assaults on the palenques. Instead, the local governor opts for divide-and-conquer tactics.

Using Catholic priests as intermediaries, the government makes an offer to the palenque chieftains: come to terms with the government and you, the chiefs, will be legally freed. Your people? -- yeah, they'll gradually work off their obligations, and in the meantime you chiefs have to help us track down the remaining holdouts. And did you say you want land? That's asking too much, but you ought to respect His Majesty's generosity and clemency anyway. 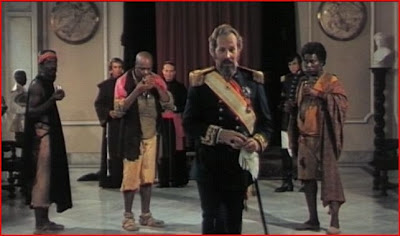 Coba and Gallo don't take this bait, but some lesser chiefs who resent these two acting as first among equals take the offer. It soon develops that Coba isn't quite as adamant as Gallo is. This isn't because of any greed or selfishness on Coba's part. He's genuinely worried about the future of his people. In an effective scene, Giral shows him watching the everyday activities of his village, but plays a soundtrack of gunfire, explosions and screaming. Above all, Coba wants to avoid the destruction of his people. Reaching terms with Spain may be the only way, but Coba wants spiritual guidance. Not necessarily persuaded by priests, he consults a fortune teller (who tells him the gods want him to use his own head) and undergoes rituals in hope of securing his people's well being. 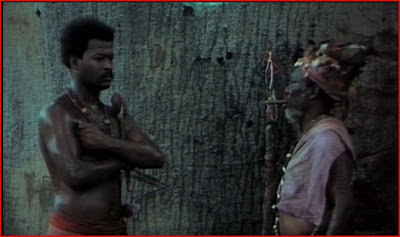 The destruction of the camp of a female chieftain decides him on accepting the government's offer, but a little scouting reveals to him that his people's plight would pretty much be a return to slavery, so he he sends everyone back into the mountains -- too late. 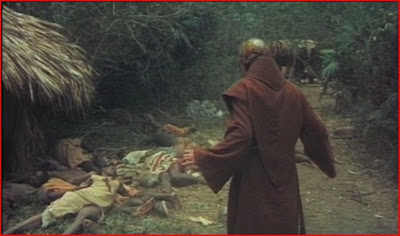 The Spaniards chase Coba down and slaughter his people, but they overreach when they try to go after Gallo in Maluala. That's probably why the film is titled as it is. But why isn't Gallo the main character rather than Coba? Because Coba has an internal conflict, a "character arc" if you will, while Gallo remains consistent in his refusal to compromise and trust in the security of his position. Coba is the main character in a cautionary tale that was probably considered not without relevance for the Cuban audience of 1979.

The clear message of Giral's Maluala is: don't compromise with the enemy, even if you think that's the only way out. The enemy is uncompromising, and any hope of saving yourself or your loved ones by appeasing him (to borrow neocon terminology) will only lead to your ruin. The only way to deal with the enemy is Gallo's way: intransigent resistance and determined defense. The message, one supposes, should have been clear to Cubans who might have been wondering whether it was possible to make some kind of concessions, compromise the Revolution in some way to improve relations with the Yanqui imperialists to the north. Give the Americans an inch, Maluala argues by implicit analogy, and they'll take at least a mile. 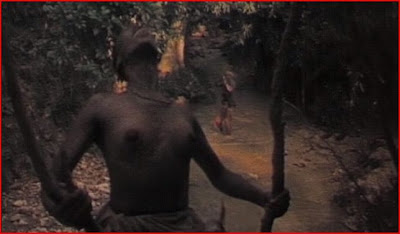 But you don't have to read a political message into Maluala to appreciate it as a film, and you might appreciate it more if you don't. In many ways, it's probably as close as Cuba came to a blaxploitation film. Coba and Gallo are mighty macho heroes, and Samuel Claxton as Coba especially wouldn't look out of place in the mean streets of American exploitation. You also get voodoo-esque rituals, topless women, and plenty of action in the second half of the story. There's a decent score by Sergio Vitier, suggesting again that the Cubans could hold their own with the Italians as far as film music went. The film may actually remind you of those spaghetti westerns set in revolutionary Mexico, though there's a closer resemblance to Gillo Pontecorvo's Burn!, except that blacks rather than whites are the main characters.

You're probably most likely to find Maluala in a public library if it has a decent foreign film collection like the Albany Public Library has. It's a pretty obscure item compared even to The Adventures of Juan Quin Quin, the last Cuban film I reviewed. There are no reviews up for the title at IMDB, and no clips to be found on YouTube. So you'll have to take my word for it that this is a pretty good first film for folks who want to see what Cuban cinema is capable of.

Posted by Samuel Wilson at 9:10 PM

Sounds like an interesting flick. How did happen upon the "Cuban Masterworks Collection"?

The Albany Public Library, as I've often mentioned, has a pretty impressive foreign film section. It is a little disproportionately Spanish-language for my taste, but I've liked the two Cuban films I've looked at so far.