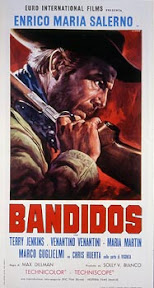 Massimo Dallamano was Sergio Leone's cinematographer for A Fistful of Dollars and For A Few Dollars More. This film, whose alternative Italian title Crepa Tu...E Vivo Io is translated as "You die, but I live," was Dallamano's first and only western as a director. Following the early custom for Italian westerns, his name is Americanized into "Max Dillman" in the opening credits. He quickly moved on to giallos and other genres before dying in a 1976 car accident. After Bandidos, he had nothing more to prove in the western genre.

Dallamano's screenwriters started with perhaps the most monstrous villain in all spaghetti westerns. Billy Kane (Venantino Venantini) is a train robber who doesn't believe in leaving witnesses. Let that sink in for a moment. If you can't imagine it, Dallamano illustrated the point with a gruesomely epic tracking shot of the carnage Kane's gang and his Mexican collaborators leave behind. Playing over the massacre footage is Egisto Macchi's grim theme song, which identifies specific victims along the way: immigrants, an ambitious showgirl, young lovers who died together. I've seen nothing like it in a spaghetti western before.

Billy Kane (Venantino Venantini, above left) and his handiwork in Bandidos.

Kane spares one man: a middle aged gunfighter named Richard Martin (Enrico Maria Salerno), despite Martin's killing of several of his gang. He's content to end Martin's gunfighting career by shooting through both his hands after proving his superiority by outdrawing the older man and shooting his holster off his belt.

We next see Martin as a threadbare impresario, the mentor of fast-draw artist Ricky Shot. The team works a tough circuit; gunmen murder Ricky on stage in mid-performance. Martin tries to drink away his frustration later, only to be provoked into a barroom brawl. A stranger intervenes to bail him out, but we've seen him before. He'd been thrown off that train just before the bandits hit it, and one of the gang had used a knife from his confiscated saddle to gut a conductor. For that reason, we learn later, Phillip Raymond (Terry Jenkins) is a wanted man. Understandably, he's content to take on a new identity as the new Ricky Shot. Martin trains him in fast draw and trick shooting, revealing that he hopes to make Ricky his instrument of revenge against Billy Kane.

Enrico Maria Salerno (above) promotes the latest in a long line of Ricky Shots, Terry Jenkins (below).

Kane has few friends. Vigonza, his Mexican partner, wants to sell him out, and so do the men in his own gang. One of them, Al Kramer, tracks down Martin and wants him to act as an intermediary between him and Vigonza in a plot to kill Kane for a bounty. Kane is one step ahead of the plot, however, and mortally wounds Kramer in a saloon. In the typical spaghetti, when you're shot, you're dead. Here, after Kane departs, the slow-dying Kramer takes over the saloon, buys drinks for everyone, and takes inspiration from a painting of the Death of Sardanapalus. Just as that potentate refused to die alone, so Al decides to kill a few showgirls for company. Ricky Shot finishes him off before any girls die, but not before Al tells him of the plan to betray Kane.

If Ricky kills Kane, or sets him up for others to kill, everyone's happy. There's one problem, though: what's it to him if Kane dies? The way he sees it, Kane can clear his name by confirming that he wasn't part of the train-robbing gang, and that makes him more valuable alive than dead to Phillip Raymond. So Ricky cuts a deal: he lets Kane in on the plot in return for Kane giving up one of the gang to exonerate Raymond. Together they destroy Vigonza's gang, then Kane lives up to his end of the bargain. He's a monster but he's also capable of honor in his fashion. That's no consolation to Richard Martin, whose instrument of vengeance has abandoned him. Once Kane's man clears his name, Raymond's heading back home. That forces Martin to painfully train himself in the use of a shotgun so he can claim his own revenge. He fails, and it's a shocker to see who we took to be the main character eliminated well in advance of the ending.

Phillip Raymond learns of Martin's death. He also learns the origin of Martin and Kane's feud: Kane was the original Ricky Shot, the student who surpassed and betrayed the master. He abandons his own mission of exoneration to avenge Martin, perhaps feeling that he'd failed his mentor or ill repaid his training, but also perhaps feeling that the spirit of Ricky Shot, the idea of the master gunfighter whose mere existence provokes violent challenges, needs to be exorcised once and for all. If so, it'd be ironic if Ricky Shot ended up the only identity left for him...

There's more going on here than in the typical spaghetti western, more complex motives and ambiguous personalities, and there's definitely more going on visually. Even in a far-from-perfect copy in VideoAsia's Thug City Chronicles collection (it's the odd film out in an anthology of modern urban adventures) it's a pictorial treat. Emilio Foriscot's cinematography is worthy of his director, while art director Jaime Perez Cubano makes the most of locations and sets. Dallamano really shows off with both dramatic widescreen compositions and tracking shots, including such extravagances as a shot following a whisky bottle down the length of a bar and a tracking shot of spurred boots walking across a street. In one especially inventive shot, Billy Kane shoots an enemy firing on him from a building across the street, and Dallamano zooms in on the man falling out the window as reflected in the window next to Kane. The train massacre aftermath is simply one of the most stunning images I've seen in a western. Bandidos has become one of my favorite spaghetti westerns and fits nicely in a top ten along with such well-known worthies as the four key Leone films, Sergio Corbucci's The Great Silence and Damiano Damiani's Quien Sabe? Because it doesn't feature any of the key stars of the genre, we're unlikely to see an official, definitive DVD of this film in the U.S. In that absence, Thug City Chronicles is worth getting, not just for Bandidos but also for some major Italian crime films from the Seventies. Any western fan should give Dallamano's singular effort a look sometime.

The English-language trailer uploaded to YouTube by LindbergSWDB doesn't really do the film justice, but take a look at it anyway.

Posted by Samuel Wilson at 9:47 PM

Great review! Just watched this a few weeks ago. I agree, a great spaghetti western. I watched on a double bill with Apocalypse Joe, which I dug as well.

Prof., I've got Apocalypse Joe in another box set and on your recommendation I'll have to give it a look soon.