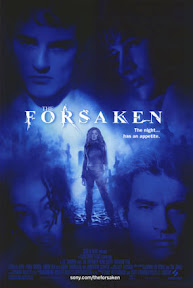 Before showing me J.S. Cardone's movie, my friend Wendigo warned me: "If you haven't seen Near Dark, you might find a few things here that look original or interesting, but if you have, it'll all look pretty familiar." I have seen Near Dark, and so has he, and he'd seen The Forsaken during its theatrical run. After looking at it again, Wendigo stands by his criticism. Cardone's film is basically a chase through the desert with (mostly) white trash thrill-kill vampires, with a hero's survival against a vampire curse at stake. As far as he's concerned, this is Near Dark Lite, cast entirely with pretty people in post-Scream fashion as opposed to a formidable presence like Lance Henriksen as the master vampire.

So why does Wendigo own a copy to show me? There are a few things about it he likes, it turns out. The B-movie vampires aren't overboard with superpowers, but are still a mortal challenge for our hapless heroes. It isn't a cartoonish battle of super hunters vs. uber-vampires; its ambitions don't exceed its budget. Also, Wendigo has an affection for white-trash vampires, for starters, and exploding vampires -- and they blow up real good here, not counting the one that gets her head blown off with a shotgun. As a bonus, the ingenue is frequently nude in good old R-film fashion. Finally, and perhaps most importantly, it cost just enough online that he was eligible for free shipping on his total order. 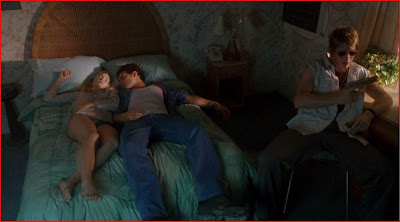 Good guys (above) and bad guys (below) in The Forsaken. 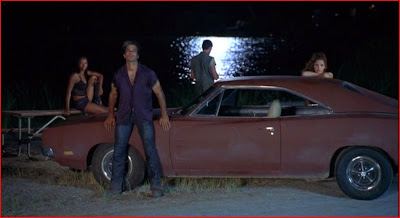 The Forsaken follows Sean, an aspiring editor for a Troma-type movie studio, on a cross-country errand in a borrowed Mercedes. Told not to pick up hitchhikers, he breaks the rule when he loses his wallet and apparent slacker Nick offers to pay for gas. As they pass through territory with lots of missing-person posters, they help out a foursome -- two guys, two girls -- who could use some jumper cables. Nick acts suspicious around them and they notice it, but each group goes its own way, the guys to encounter a strung-out girl in a diner, the quartet to crash a private beer party, beg for brews and kill everyone in sight. They are our vampire team: Kit, the master (Jonathan Schaech), two female "feeders" and their mortal "daydriver." We will know them, in no particular order, as "the poser," "the retard" and "the Penthouse Pet from Hell." The other female doesn't stick around long enough to earn a nickname. She blows up real good when the good guys drag her out of a car trunk one morning. 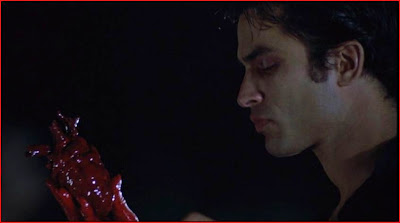 Look into your heart, Kit. Where were you when your girlfriend was left out in the sun too long? 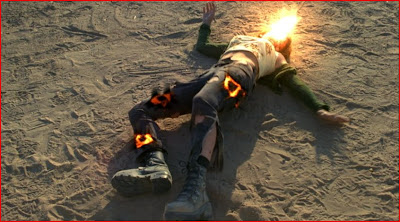 Nick seems to know what's wrong with Megan, the strung-out girl. She's been bitten by the vampire and has empathic seizures whenever he kills thanks to some sort of psychic link. Luckily, Nick has some medicine for this sort of trouble, and he uses the stuff himself. There seems to be an entire underground pharmaceutical industry dedicated to staving off the curse of the vampire, but the effects are temporary and increasingly ineffectual. That's bad news for Sean, since the girl bit him while freaking out in a bathtub. Through the medical grapevine, Nick has learned of a surer cure. In classic Bram Stoker fashion, if he can whack the master vampire whom he suspects bit both him and Megan, their curse and Sean's will clear right up. The thing to do is leave bait for the vampire, and the way to do that is deny the girl the medicine so she maintains her link to the master.

Screenwriter Cardone seems to have thought that he needed to justify his project by positing a new mythology of vampirism. Along with his pills, Nick has acquired the knowledge that vampirism began at the Siege of Antioch during "the Great Crusade," when eight French knights made a pact with the Devil in order to avoid death at the hands of the Turks. Forsaking their cause and each other, they become... The Forsaken! Their subsequent aversion to daylight is an extension of their guilty reluctance to be seen, and as for drinking blood,... as the man on the old TV show used to say, "Deals with the Devil are bad." The funny thing about this claptrap is that I suspect that no one told Jonathan Schaech about it. His performance betrays no awareness of a medieval or crusading past. You'd think that was brought up because it might be relevant to the character's actions or motivations (sort of like how Dracula in Wes Craven's Dracula 2000 is really Judas Iscariot and -- actually, never mind.), and you would think wrong. Schaech is barely convincing as the master of a moron and a crazy woman. We wouldn't want to burden the man with a backstory, would we? 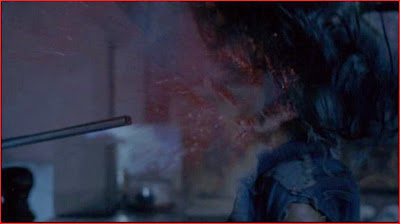 With a reasonable amount of nudity and frequent bursts of ultra-violence, The Forsaken might actually pass for a passable Eighties drive-in movie.

So what is The Forsaken's actual contribution to vampire cinema? Wendigo says, "There isn't any, apart from some new jargon." Not even its pharmacological approach to warding off the curse strikes him as unique; Blade and the sequel to John Carpenter's Vampires had the same idea. Cardone may have been aiming at an A picture (Sean drives through Monument Valley to set the tone) with a cast mostly made up of TV graduates, but the end product is pure B-movie. Not that that's entirely a bad thing, because it's an okay B-movie, with some decent action scenes, attractive nudity and amusing explosions. Wendigo can't really recommend it to anyone, but he says not to knock it if you find it on TV. You could do a lot worse with ninety minutes of your life.

This version of the trailer was uploaded to YouTube by HorrorMvieTrailers:

Posted by Samuel Wilson at 9:01 PM

For what it is - essentially a mashup of NEAR DARK and THE HITCHER - I really enjoyed THE FORSAKEN. Yeah, it's pretty dumb but I enjoyed the repartee between the two good guys, even if one of them gives a speech that rips off the one from FIGHT CLUB. As you pointed out, I like how the film just goes for it with a hard R horror film filled with ultraviolence and nudity instead of wimping out and going for a lame PG-13 rating to appeal to a larger audience.