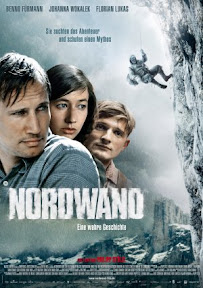 The mountain film is a German film genre whose heyday was in the late Weimar Republic era -- the late 1920s and early 1930s. If any person symbolizes the genre it would probably be Leni Riefenstahl, who starred in several directed (or co-directed) by Dr. Arnold Fanck before directing her own mountain film, The Blue Light prior to her career as a documentarian. The mountain films aspired mostly to express something romantic about the German character, but Philipp Stoelzl's film, though set around the right period, feels more like an American film of the 1930s in many ways, and to the extent that it is a mountain film it aspires to be an antithesis of the old films.

Nordwand is based on a 1936 attempt to ascend the north face of the Eiger, the Swiss mountain heretofore identified cinematically with Clint Eastwood. A prior German attempt, a newsreel tells us, ended in the deaths of the two climbers. The government is encouraging climbers to conquer "the last problem of the Alps" (thus achieving the "final solution" to the Alps problem?) during the year when Germany hosts the Winter and Summer Olympics, as further proof of Aryan athletic superiority and overall national character. The Nazi regime in Nordwand plays pretty much the role of an aggressive newspaper publisher or editor in an American film -- somewhere between Walter Burns and D. B. Norton. The film focuses initially on a newspaper that's just received the directive from Berlin to promote the conquest of the Nordwand, and on Luise, a go-getting young photojournalist (Johanna Wokalek), who thinks she has two likely candidates for the climb: her hometown pals from Berchtesgarden, Toni Kurz (Benno Furmann) and Andi Hinterstoitter (Florian Lukas), whom we first see assigned to toilet detail at their military barracks. They win our sympathy instantly because they suck as soldiers, preferring to goof off on the nearby mountains. As extreme sportsmen of their time they know their stuff, and Toni knows their limitations enough to initially turn down Luise's suggestion that he and Andi try the Nordwand. They don't call it "the death wall" for nothing, he thinks. On top of that, he doesn't like the idea of climbing as a publicity stunt, even with a patriotic spin. "I climb for myself," he says, but when he sees that Andi wants to give it a go, he allows that friendship is also a sufficient motive. Without fanfare, our heroes quit the service and join rival teams from Germany and elsewhere at the foot of the Eiger, eventually falling in with a hapless pair of Austrian Nazis who prove more hindrance than help on their quest.

To tell much more is to spoil the film. It's enough to say that most expectations inspired by North Face's affinities with both German mountain films and U.S. newspaper or "Cinderella Man" movies will be dealt with harshly. I don't know if it was Stoelzl's conscious strategy, but the screenplay he co-wrote with three other scribes seems determined to use genre conventions to refute generic thinking. For Toni, Andi and finally for Luise, the climb has no meaning other than suceeding or surviving the experience. Patriotism doesn't come into it -- and not because our heroes are any kind of dissidents; this is a surprisingly apolitical film given the era in which it's set. While our climbers don't want to be heroes, Luise grapples with the temptation, embodied by her editor (Ulrich Tukur), to turn the climb into a career-making news story. There's a feeling that this film could turn into Ace in the Hole at any moment but for Luise's hardening integrity. She takes heroic risks over the course of the story, but as a friend concerned with people's lives, not as the archetypal intrepid reporter. When she quits Germany at the end of the movie, it's once again not an explicit rejection of Nazism but a rebellion against any system that exploits individual endeavor by imposing political, cultural or commercial meaning on it.

Her decision clarifies the nature of the film she appears in. Stoelzl found an interesting subject that happened to be embedded in a controversial setting to which the essential story is nearly irrelevant. If his challenge was to make a meaningful movie about that story without turning it into a commentary on Nazi Germany, he met it and succeeded. While watching it, I wondered whether it was going to amount to more than a suspenseful film about a mountain climb. It didn't -- and in a way it did.

Here's the U.S. trailer, uploaded to YouTube by the distributor, Music Box Films:

Posted by Samuel Wilson at 5:11 PM