Friends, I come before you to discuss the vampire; a minority element if ever there was one, and there was one....Really, now, search your soul, lovey -- is the vampire so bad? All he does is drink blood. Why, then, this unkind prejudice, this thoughtless bias? Why cannot the vampire live where he chooses? Why must he seek out hiding places where none can find him out? Why do you wish him destroyed? Ah, see, you have turned the poor, guileless innocent into a hunted animal. He has no means of support, no measures for proper education, he has not the voting franchise. No wonder he is compelled to seek out a predatory nocturnal existence.

Robert Neville grunted a surly grunt. Sure, sure, he thought, but would you let your sister marry one? 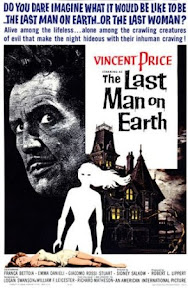 Richard Matheson's I Am Legend is a product of its time -- it was published in 1954 -- that has been perpetually reinterpreted ever since. It has been adapted for film three times -- add a fraction if you count the short film that Jean-Luc Godard claims to have based on the novel. It's a curious thing, though, that in our age of pop vampires the most recent movie version of the story, the one that uses the original title, took pains to make Robert Neville's enemies something other than vampires, or nothing we recognize readily as vampires. Did it lose something by doing without the creatures' aversion to garlic, crosses and mirrors? How important is vampirism to the story?

My friend Wendigo reminds me that Matheson's novel makes a lot of its hero's struggle to comprehend a mass outbreak of old-school vampirism. Neville teaches himself science in order to formulate a theory of vampirism's origins in bacteria, and part of its amusement comes from Neville's struggle to make it all make sense. When I read it, I thought it might be a transparent account of Matheson's own struggle to conceive a science-fiction vampire. To make the infected humans something other than traditional supernatural creatures sacrifices that psychological struggle to make sense (or science) out of the stuff of superstition. You sympathize with Neville's struggle in the book even while you question whether science can comprehend it all.

At the same time, Matheson's vampires, which are fairly well represented in Sidney Salkow's film (co-directed by Ubaldo Ragona), aren't parading around in opera capes and gesturing hypnotically at one another. Wendigo notes that George Romero has cited the novel as a major influence on Night of the Living Dead, and Salkow's film looks like it had to be a visual influence. These are pale, slow, staggering, somewhat spastic vampires, no match for a man one-on-one but strong in numbers. They may not be dead, but they're all messed up. We're as far away from Hammer as we are from Universal. Wendigo thinks this may be the first movie to imagine a world overrun (if not ruled) by vampires, though it lacks the exotic or erotic imagination of later variations on the theme. But if Matheson's or Salkow's vampires don't remind you of Lugosi or Lee, Wendigo says that their shabby appearance and uncouth manners fit many a folkloric profile of the vampire.

But the vampires themselves are less important to the overall mood of the story than Neville's attempt to understand or resist them. Wendigo sees a generation-gap subtext in it, with Neville as a flustered suburban parent who can't figure out those kids today, whose values are no longer his. The core story isn't so much about the extinction of mankind, as Salkow's title implies, but the obsolescence of a certain kind of man who may not like what's come to replace him but really doesn't have the power or the right to stop them. You can also read anxiety about Communist ascendancy into it; the era's paranoia was partly founded on the fear that Communism was going to win. As the excerpt above shows, you can also read some racial anxiety into it as well. I Am Legend was written at a time when many people saw the world changing out of control and couldn't see themselves in the future. The Last Man On Earth was filmed around that same time, but seems to miss the point a lot.

Above, Franca Bettoia as Ruth holds Vincent Price at bay. Below, the next generation of vampires makes its presence known.

According to Wendigo, Matheson was set to adapt his own novel under the impression that an A-list cast would work alongside Vincent Price in a big-budget movie, but bailed when he discovered the limitations of the production. Matheson shares screenplay credit under the pseudonym of Logan Swanson, but the finished product loses a lot of Neville's character. For starters, in one of those infuriatingly arbitrary decisions, Neville's name is changed to Robert Morgan. Second, this film makes him a scientist from the beginning struggling to find a cure for the pandemic, so we don't get those great (though maybe uncinematic) scenes when he teaches himself science. Third, Neville's alcoholism is underplayed. In the novel he frequently drinks himself into a stupor to drown out the yelling outside his door or forget his sorrows. In Last Man there's one scene when Morgan grabs a bottle of booze, but tosses it aside to go to sleep.

Maybe Matheson's co-writers thought a drunk who didn't know much about science was unworthy of Vincent Price. I have to say that when I read the novel, I heard Charlton Heston's voice in my head whenever Neville ranted or raved, even though it's been decades since I last saw The Omega Man. The Neville of the novel has that sardonic, cynical, self-pitying attitude that Heston could convey, but I don't think that was beyond Price's powers. Wendigo feels that Price was further undercut by the writers' heavy reliance on voiceover narration early in the film. That narration announces too early what the film will be about, and it denies Price the chance to reveal his character through his actions and his acting. He's better when he can show a range of emotion, laughing then crying while watching home movies, pathetically trying to reassure a dying dog, and desperately trying to keep the young woman he finds outside from running away from him. The main thing I miss from his performance is the rage that so often rises to the surface in the novel. Wendigo feels confident that Price could have pulled it off, but we'll never know.

No exploding vampires here: in this picture they stay where you staked them.

In an obvious sense, Last Man is more a vampire-hunter movie than a vampire film, though an especially bleak one compared to Hammer's Van Helsing vehicle Brides of Dracula. Vampire hunting for Neville/Morgan isn't a cool or glamorous calling, and there's little point to his stakings apart from payback. In that sense, The Last Man on Earth has had a greater influence on horror films outside the vampire sub-genre, particularly the "survival horror" category founded by Night of the Living Dead. Salkow's film has more historic than aesthetic significance. The script wastes too many of the novel's opportunities, from smothering the opening with voiceovers to dealing all too briefly with the hero's adoption of the dog. Like all the movie adaptations of I Am Legend, this film misses the point of Matheson's ending, the passing of a man who knows his time is past. Wendigo doesn't think it a waste of time, and he recommends it to anyone who wants to know what vampires looked like to most people in the distant past. He thinks Matheson fans should give it a look, if only because it'll give them a better appreciation of what Matheson accomplished and how movies have fallen short of it. Vincent Price's fans should enjoy this without reservation since it's the nearest thing to a one-man show he pulled off in a feature film. But the definitive film version of I Am Legend remains to be made.

"Can a zombie woman hunger for love?" That's the question asked by this trailer, uploaded to YouTube by fraserw2

I'm pretty fond of this movie. As you say it's flawed but worthhile.

While I liked Charlton Heston's performance in The Omega Man I didn't really like the movie as much as Last Man on Earth. Which is a pity since Heston was perfect casting.

I’ve nominated you (and Wendigo, of course) for a Versatile Blogger award.