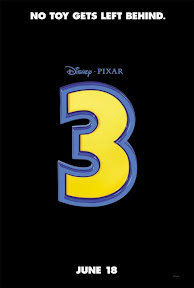 Let's be reasonable. The new Toy Story film doesn't surpass its predecessors, but there's no shame in being just about as good as they were. The first film got the whole Pixar feature film thing going, while the first sequel remains my favorite Pixar feature. The third film, appearing 11 years after Toy Story 2, doesn't really expand the Toy mythos the way the 1999 film did. Toy Story 3 consists mostly of variations on themes from the earlier movie, and while it's being treated as the conclusion of a trilogy, it almost accidentally left me with less sense of closure than the second film did.

The new picture fulfills the implicit prophecy of Toy Story 2 that a time would come when Andy Davis would leave behind Woody, Buzz Lightyear and their pals the same way Woody's thematic partner Jessie had been abandoned by her original owner. Andy's a sentimental kid, even at college age, and can't bring himself to throw out his last remaining toys (our core cast from the previous movies, including Jessie and Bullseye the horse); he plans to take Woody away with him while relegating the rest to the limbo of his mom's attic, where they have at least the hope of redemption in another generation. But through the usual happenstance most of the gang find themselves in danger of being taken away as garbage to the city dump, only to end up as a mass donation to the Sunnyside daycare center. The prospect of perpetual playtime with waves of children appeals to most of them, but Woody insists that they are all still Andy's to dispose of as he pleases. Convinced that Andy meant to dump them, the other toys are happy to remain at Sunnyside while Woody attempts a breakout. They soon learn that not all play is good play; as low toys in the pecking order dictated by Lots O'Huggin Bear (a tremendous voice performance by Ned Beatty), they're at the mercy of toddlers who mindlessly abuse them. Their resistance to Lotso's hierarchy turns them into prisoners plotting a mass escape while Woody plans to break back in to rescue them....

Once I read that the new movie would involve toy abuse at a daycare center I started wondering what point John Lasseter, director Lee Unkrich and writers Michael Arndt and Andrew Stanton wanted to make. On the simplest level Sunnyside is an ideal setting for a prison break storyline, but the place reminded me less of a prison than of a refugee camp. That's the sort of place where a faction of inmates could take over by force or intimidation and take control over the distribution of necessities and privileges. Our heroes are clearly displaced "persons," and if you see them that way you begin to think that a daycare center, no matter how benignly operated (as Sunnyside will be, eventually) is a proper final destination for them. Lotso upholds Sunnyside as an ideal alternative to the perpetual heartbreak of toy life; there will always be more children to play with the daycare toys. "No owners, no heartbreak," he says, in a way we suspect is meant to be proven wrong.

The first two Toy Story films were fables about the social construction of identity, if I can be pretentious for a moment. The meaning of "You are a toy!" one one level, is that you aren't just what you think you are. Buzz is not simply the space ranger he's programmed to think he is; Woody and Jessie are not simply the privileged collectibles Stinky Pete tempts them to think they are. Their true identities are defined by play (and their interactions with each other in toy society) and belonging. For a toy, not to be owned is to not fully live. Lotso, like Jessie, had an owner in the distant past, but suffered an even more traumatic break -- the sort you can imagine some of the other toys suffering, especially Buzz. Unlike Jessie, Lotso found an alternative society in the institutional life of Sunnyside. He rejects the idea of ownership, of his own belonging, and we learn that behind that rejection and his benign exterior is an all-encompassing hatred that makes him one of the most vicious of Disney villains. That extends to self-loathing: "We're all just trash!" is his angry comment during a confrontation with Woody's crew, and that sentiment makes him willing to condemn our heroes to death: absolute physical destruction in the hellish furnace of the city dump. Lotso is an extreme case of a malign institutional mentality; others in his clique will prove more amenable to rehabilitation. The film lets you conclude that Lotso's bitterness predated his institutionalization, which only hardened it, while the privileged toys in the Butterfly room with the older children probably don't find the institutional life oppressive. Objectively speaking (as far as possible when discussing a cartoon about living toys) it's a good thing that toys are there for the daycare kids, while it's a better thing in story terms if the toys share toddler detail in the Caterpillar Room more equitably. But in the end Pixar tells us it's better for toys to be owned by individuals. You can read that as a "family" value (Andy's toys identify themselves as a family in one scene) or read some political point into it, but if any of the creators have an axe to grind, they do it subtly enough not to bother anyone.

Lotso's failing is his refusal to let his hurts heal in the only way available to toys; by going through another generation of play. It's never been stated explicitly to my knowledge, but ever since Toy Story 2 I've assumed that toys must forget their pasts at some point, including past owners. When he was first unwrapped, after all, Woody must have thought of himself as the hero of that old TV puppet show, just as Buzz thought of himself exclusively in terms of his manufactured mythos. Yet he has no memory of any of it when he meets the rest of the Roundup Gang, and despite being as much as fifty or sixty years old, he has no memory (that he speaks of, at least) of any owner besides Andy. If any of Andy's other toys are hand-me-downs, they don't let on. Jessie's tormented history and relatively recent re-immersion into the world of play leaves her with still-fresh memories of her past, but if I'm right about Woody we should expect him and the others to forget Andy eventually. Will they forget the mortal peril they experienced in this film? Will they experience it for the first time again next time? I hope I don't spoil anything by stating that Toy Story 3 has a happy ending, however bittersweet it may also be, but everything we've seen over the three films leads us to assume that this ending is only temporary. So is it that happy? How do we know that they won't end up in the dump fifteen years from now? Will that be time for Toy Story 4? Or will virtue be rewarded from generation to generation until WALL-E finds our playful friends?...

In my book, the fact that a cartoon can raise such questions is a point in its favor. The Toy Story films are broad enough to be seen or read from many different angles. At different moments I thought that the toys could represent either parents or children, or even an adolescent's first break-up. That flexibility's another good thing. This film in particular has a lot of good things going on. It has a bravura opening with the core cast in a necessarily freakish Wild West setting that I suspect shows up Jonah Hex in all of a minute -- though it may also leave you wondering whether Andy grew up to write Jonah Hex. Ned Beatty I've already praised; he brings some Seventies redneck gravitas to this venture that gives it an extra edge. Kudos also to Michael Keaton as Lotso's lieutenant, a Ken doll who partly confirms my theory of toy forgetting by not recognizing Barbie and also proves the bad toys' potential for redemption. Overall, this film worked better for me as a drama as a comedy. There's plenty of good humor, but the creative team goes yet again to the well of "demo-mode" Buzz, while his later transformation into a stereotypical Latin Lover through the wonder of a Spanish-language option is just stupid. The film's climax is a little too much deus ex machina, though it does pay off a three-film old running gag, while Lotso's comeuppance didn't seem sufficient for his villainy. The early reviews had led me to expect a more violent film, and there is a moment when you probably will believe that some familiar characters have been destroyed. That moment keeps you in suspense through a harrowing sequence that seems to offer no way out for our heroes, but the resolution, including Lotso's fate, seems anticlimactic. The same goes for Pixar's usual end-credit gag reel, which on this occasion undercuts the emotional power of the story's actual finale.

But there's no denying that Pixar has indeed done it again. We can debate what awards Toy Story 3 may deserve, but I'd say they may as well give John Lasseter the Thalberg Award for Pixar's incredible run of popular and critical success. And to answer the question from the start of the weekend, I'd tentatively place this movie at #4 in my list of favorite "third" films, between The Return of the King and Son of Frankenstein. I'm not sure yet where I'd rank it in the Pixar canon, except that it's not number one. It will rank fairly high, though, and that'll place it in pretty exalted company.
Posted by Samuel Wilson at 9:34 PM