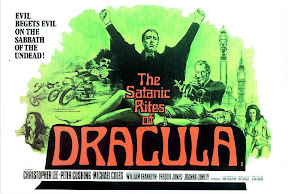 The next movie on the top of my friend Wendigo's vampire movie pile is The Forsaken. Perhaps understandably, he wanted to watch something else. He offered Christopher Lee's swan song in the role that made him a star. Many people feel he went out with a whimper, but Wendigo feels that Alan Gibson's film does some things with the vampire genre ahead of its time but doesn't get credit for them. For instance, Dracula becomes more of a cult leader in what would become the Jim Jones sense of the word, the sense of having an apocalyptic vision, than Robert Quarry did in either the Count Yorga films or The Deathmaster. Also, Dracula in his alias as Mr. Denham more successfully infiltrates mainstream society as a business magnate more successfully than modern vampires had yet done. It makes him more of a menace than if he spent his time preying on hippies or other outsiders. 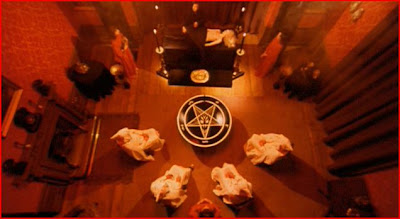 English and American distributors differed on how to exploit this movie, the U.K. opting to emphasize Satanic Rites (above), the Americans Vampire Brides (below, caught in a romp with Joanna Lumley) 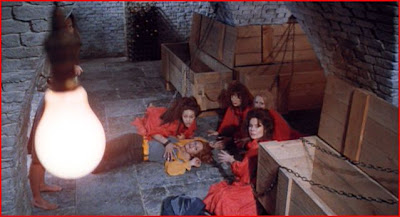 Satanic Rites is a direct sequel to Dracula A.D. 1972, using the same modern Van Helsing (Peter Cushing as usual) and some of his helpers from the previous film. Wendigo considers the later film a big improvement because, though Dracula remains reclusive, he actually partakes of modernity this time instead of lurking at the fringes. Rites is clearly designed as a modern movie with secret agent, biker and conspiracy elements -- not to mention the trendy satanism of the Seventies and the decade's ghastly fashion sense. The cult aspect of the Hammer Dracula had been around from the beginning, when the Count in Horror of Dracula is identified as the leader of "the cult of the vampires," but Rites is the most elaborate illustration of the premise since the Dracula-free Kiss of the Vampire. 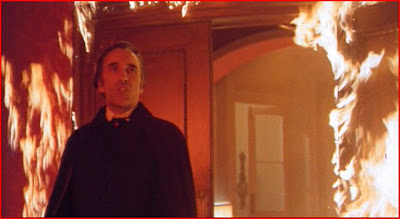 "My revenge spans centuries!" Dracula blusters as his house burns down. If so, he should have invested more resources into recruiting (and outfitting) quality personnel. 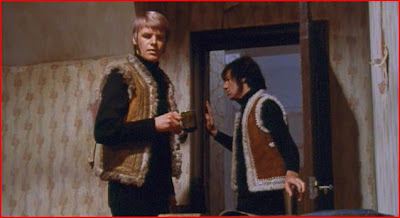 Wendigo always likes to see authentic vampire lore in vampire films. Vampiric vulnerability to running water is demonstrated when Dracula's brides are destroyed by a sprinkler system in their basement lair, as it had been in A.D. 1972 when a vamp is killed in a shower. But Rites's most infamous use of authentic lore is its employment of a hawthorn bush as a mortal obstacle to vampires. Allegedly the raw material for the Crown of Thorns, its tangential holiness makes the hawthorn even more of a nuisance for the undead than it is for the living. Christopher Lee has had some sad finishes in this series, but being trapped, ripped and tripped by shrubbery before Cushing administers a merciful stake would seem to touch bottom for the poor man. But Wendigo advises: at least he never had to count grains in the road or succumb to other embarrassing vampire foibles. On the other hand, Dracula has foibles enough. He can't resist the temptation to taunt and boast until doing so ruins all his lovely plans for exterminating the human race by plague. Then, unable to resist being taunted, he lets Van Helsing goad him into that fatal bush 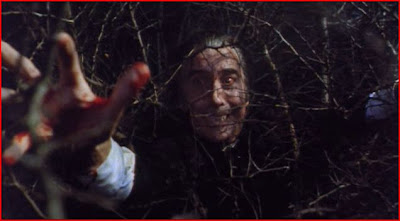 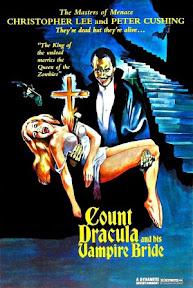 Lee was quite sick of Dracula but kept coming back for more, complaining to his fans all the while, until he was done with this one. At least here he gets a decent amount of dialogue compared to the growling and hissing written for him in previous episodes. On the other hand, he doesn't put in an appearance in a film in which he's the title character until about a half hour in, and then just for a perfunctory biting seen that has little to do with the main story. It seems to have been included just so viewers wouldn't feel ripped off by his not appearing for yet another half hour. By now, however, the public may have been sick of Lee as Dracula. This second attempt to set him in the modern world was the end of the experiment. The Americans didn't even want it until 1978, when they could exploit the anticipation of Frank Langella's Dracula film -- and even then they had to sell it with outrageous ballyhoo like "The King of the Undead marries the Queen of the Zombies!" I mean, that's not even real! Anyway, Hammer's next try was The Legend of the Seven Golden Vampires, once more a period piece with the added exotica of kung fu. Lee was invited to appear but finally found the will to refuse. Cushing's age also gives Rites the feel of a series that had finally run out of gas. You can see an effort at transition to a new generation of vampire-fighting heroes (including pre-AbFab Joanna Lumley), but Van Helsing's helpers don't have the great man's charisma. 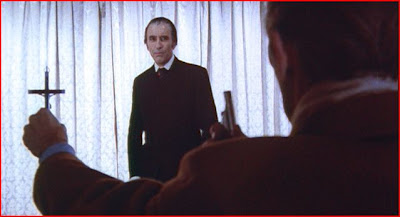 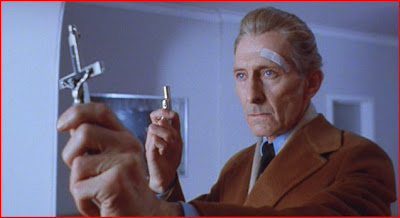 The final battle between Lee as Dracula and Cushing as Van Helsing should be a major moment, but when people can turn vampires with crosses made out of just any old thing (as Michael Coles demonstrates below) it undercuts the drama a bit. 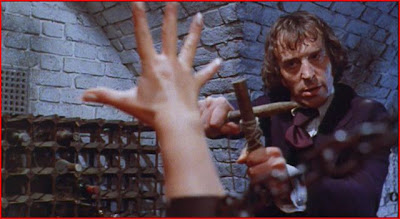 While Wendigo considers Satanic Rites an improvement on A.D. 1972, he admits that there really wasn't anywhere left for Hammer to go with Lee as Dracula, especially given Lee's attitude by this date. He thinks it's a better finale for a key Hammer series than Frankenstein and the Monster From Hell, at least. On the other hand, Wendigo thinks the Hammer Dracula series was less than the sum of its parts. Horror of Dracula is fine and Brides (without Lee) may have been Cushing's finest hour as Van Helsing, but after those first films the sequels are uninspired in their use of Lee. Hammer's historic contributions (blood and sexuality, etc.) can't be denied, but the evolution they started can't help but make them suffer in retrospect. This last effort at least showed more imagination than most of what came between the beginning and the end.

Here's the original British trailer, uploaded to YouTube by gotohelltown:

Meanwhile,Surfintheater has uploaded but regrettably left a mark on the wacky but spoilerific American trailer for "Count Dracula and his Vampire Bride."

I love Hammer movies but I'm not all that fond of their Dracula and Frankenstein cycles. But I did like Satanic Rites of Dracula quite a bit. And I agree it was ahead of its time.

My favourite Hammer vampires movies though are Vampire Circus and Legend of the 7 Golden Vampires.

I thought that the Satanic Rites of Dracula was great and there should have been a lot more Dracula films done in modern day settings. The Dracula character is only as good as the actor playing him and Christopher Lee had the right gravitas to play that, its a shame he stopped doing the Dracula Vs Helsing series after 1974, which gave this last film an element of sadness.

I believe Lee was always disappointed with the films because they incorporated virtually nothing of Stoker's powerful character. At least here, in the climax, he finally gets to deliver some of Stoker's lines. Good point about how he more successfully infiltrates the modern world not as a vampire but as a businessman. Nice touch, that.

Will, I agree with your point about Lee's feelings regarding the Hammer Dracula movies. Thet's why he was much happier with his performance in Jess Franco's Count Dracula where the director allowed him to play the character exactly the way he wanted to play it.

Lee was wasted in Hammer's Dracula movies. Although he did great things in other Hammer movies such as The Devil Rides Out, and even in Rasputin, The Mad Monk where he has fun hamming it up outrageously.

Thanks for writing, all. Speaking for myself, I think that Hammer's approach to Dracula wasted one of Lee's greatest gifts, his voice. But the studio had a hard time appreciating him early on, casting him for size mainly as mute creatures like the Frankenstein monster or the Mummy. If Satanic Rites had done more with Lee as a modern businessman interacting with or manipulating modern people it might have kept the franchise viable. I accept the consensus that Rites is better than A.D. 1972, but my own memories of the earlier film are pretty faint.