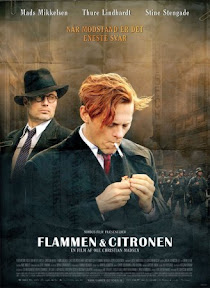 If murder is just killing without a license, as Arthur Wilson says, that begs the question of the authority to license killing. In Ole Christian Madsen's film, the protagonists -- red-haired "Flame" (Thure Lindhardt) and sweaty "Citron" (Mads Mikkelsen) get their license from the Danish underground resistance to the Nazi occupation, and their boss, Aksel Winther gets his from London. With the pretense of a license come rules: the team can kill Danish collaborators, but not the German occupiers themselves. But one day Winther changes the rules and orders our heroes to kill three Germans, including a woman. Here Flammen draws the line; his personal code won't let him kill women. Citronen is willing but less expert; he wounds the woman in the arm but can't follow through. Flammen has to go in and finish her, but he has to turn her head away so he doesn't have to look at her face.

If it's open season on Germans, Flammen and Citronen would like to whack Hoffmann, the local Gestapo commander, but Winther places him off-limits. Meanwhile, one of the three condemned Germans persuades Flammen to spare him by declaring himself a member of the German resistance to Hitler. Winther calls Flammen a dupe and sends him back to do the job right. What is the truth? Does it matter? Is there a logic or a strategy to Winther's inconsistency, or are the targets chosen on an arbitrary basis? Or are they chosen with an ulterior motive? As they discover greater cause to question Winther's orders, Flammen and Citronen approach the moment when they'll authorize themselves to kill Hoffman or whomever their own sense of the national interest dictates. They begin to see themselves above the law in other ways. Citronen has a hard time supporting his wife and daughter as a resistance assassin. Eventually he decides to rob a collaborating grocer (though he refuses to take money from the register) so he can put food on the table and give his daughter presents. When he delivers the goods, his wife confesses to an affair. That's the sort of film this is. It develops an almost oppressive momentum; if anything bad can happen to our heroes, or if something can further tilt their moral balance, it will. Flammen falls in love with a woman who acts as a courier for Winther. Will she be a spy for the Germans? You'll at least be strongly invited to think so.

This movie, based on actual resistance fighters, grows in the shadow of one film in particular: Jean-Pierre Melville's Army of Shadows (1969), a film condemned in its time for telling a resistance story in the manner of a gangster film but rediscovered to universal acclaim in the new millennium. Melville's film is a grim, suspenseful affair in his characteristic manner. Madsen can't match Melville as a thriller, but he can try to top the grimness and place more emphasis on the ethical dilemmas confronting irregular killers in wartime. This he does quite effectively, if he does also go on too long, nearly to the point of overkill.

What Madsen does most effectively is question the entire purpose or relevance of his heroes' exploits. He duly notes the postwar honors conferred upon the real men, but the film itself leaves you wondering what Flammen and Citronen actually accomplished. The director expresses this most forcefully when he portrays the Copenhagen uprising of late June 1944. For once it looks like actual warfare on screen, even if it's only street fighting, but the thing you really notice is how Flammen strolls through the action without lifting a finger to help his fellow Danes. He's under orders to do nothing until he gets further orders from London via Winther. This is what World War II is supposed to be: people fighting Germans. But it's the sort of showdown Winther has been at pains to avoid. If Winther and Flammen and Citronen seem to be fighting their own private war at times, I'm sure that impression was intentional. In our age of terrorism, privatized warfare and the idealized ruthlessness of special ops, this side of the "good war" seems more relevant than ever. Leaving aside temporary relevance, Flammen & Citronen is worth seeing for anyone interested in the ongoing cinematic exploration of the enigma of killing.

The English-subtitlted trailer from IFC Films was uploaded to YouTube by rando14.

Leaving aside temporary relevance, Flammen & Citronen is worth seeing for anyone interested in the ongoing cinematic exploration of the enigma of killing.

Yeah, excellent point there Samuel, though of course this is a taut, expertly crafted film of one of the most fascinating of all stories connected to the second world war. It couldn't miss really, short of shoddy filmmaking.