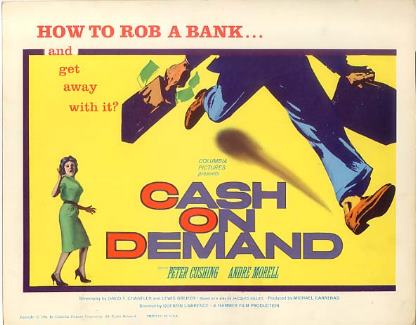 Quentin Lawrence's film, based on a play by Jacques Gillies, is a Christman Carol for the mid-20th century. The idea is not to subject a mean boss to three spiritual visitations, or even one, but to put him through an ordeal that makes him regret his miserable ways. For this film's purposes the ideal instrument of the boss's reform is not a spirit, but a classic taunting villain: Colonel Gore-Hepburn (Andre Morell), as he calls himself, who blusters his way into a bank office by identifying (but not verifying) himself as a security inspector from the bank's insurer. Once inside, he informs the manager, Mr. Fordyce (Peter Cushing), that his accomplices have Fordyce's wife and son under their power, and that unless the colonel regularly signals Fordyce's continued cooperation with his robbery of over 90,000 pounds, Mrs. Fordyce will have her brain fried by an electrical current. For all that this disrupts Fordyce's usual glacial composure, the colonel obliges him to act normally with his employees. His act may not fully convince the audience, since Cushing gets all jittery and anxious, but the employees are none the wiser, though they do decide to finally check with Gore-Hepburn's presumed employer to verify his position with the company. Long-distance phone service in Great Britain was apparently so much shite in 1961, so the delay in restoring a connection with the insurance firm adds to the suspense of the situation. Meanwhile, the colonel takes advantage of his power over Fordyce to chide him for his coldness toward his workers (and his family) and his lack of Christmas spirit, the manager having failed to contribute to the holiday party fund. The money taken, the colonel requires Fordyce to keep quiet for another hour for his family's sake, but within the hour the call from the insurance firm gets through and, unknown to Fordyce, his head clerk Pearson has called the police to intercept the colonel's car. To save his family, Fordyce must behave in a manner that only tends to incriminate himself, especially once Gore-Hepburn is nabbed. But since the colonel's accomplices are still out there (or are they?), Fordyce must continue to damn himself to save his family, but there are a couple of mindfux still to come before our real-time eighty minutes are up. 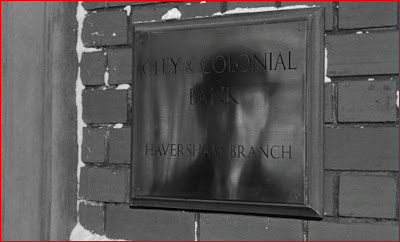 Peter Cushing makes a nebulous entrance in Cash On Demand (above), only to be driven to drink by a master criminal (Andre Morell, seated) who may be less than meets the eye. 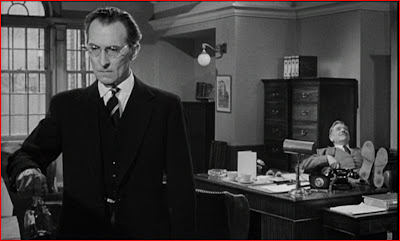 The film retains its inherent theatrical nature, the action being restricted to the bank, but in Hammer's hands it becomes a star vehicle for Cushing, who gets ample opportunity to define his character through fussy actions and manners before the taunting villain begins to break down his reserve. This Christmas story (set on December 23) becomes perhaps most Dickensian when Fordyce's fate is resolved by an act of grace and his lesson appears to be learned. Whether you see it that way or not, it's fun to see Cushing go through his paces in a mildly satirical thriller rather than the usual horror film. Cash On Demand is one of six films in Sony's Icons of Suspense set, its latest collection of Hammer releases, which I have out of the library for a long weekend. I probably won't watch all six this time out, but expect to see more reviews from this promising set in the future.
Posted by Samuel Wilson at 12:02 AM

Excellent review Samuel - I recently covered this one and NEVER TAKE SWEETS FROM A STRANGER from the ICONS OF SUSPENSE set on The Celluloid Highway and couldnt agree more about how enjoyable CASH ON DEMAND is - its good to see the film finding an appreciative audience - keep up the good work!