"It's clear that your mind is completely destroyed!" 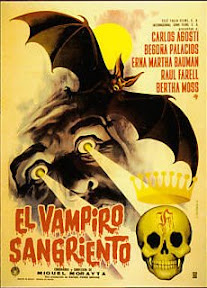 What's so bloody about this particular vampire? Isn't using that title sort of like making a film called The Hairy Werewolf? As my friend Wendigo and I learned, however, in the universe of Miguel Morayta's film, Count Siegfried von Frankenhausen is the only game in town. As vampire hunter, pedant and all-around windbag Count Cagliostro explains, the Frankenhausens are the only vampires on earth -- living vampires, that is, but we'll get to that later -- and have been since the 12th century. Vampirism in El Vampiro Sangriento is really a hereditary disease. It doesn't confer immortality; the Frankenhausens must reproduce, and the eldest son acquires the "infirmity" when he comes of age. He becomes "the Vampire of Moonlit Night," killing victims by drinking their blood while injecting "vampirina" into their bloodstreams. "These dead vampires are waiting," Cagliostro's assistant explains, "They remain quietly in their caskets and do nothing at all." But if the current Count Frankenhausen should die, the dead ones will rise from their caskets with an insatiable lust for blood. The Count himself, therefore, must be handled with care until Cagliostro can perfect his device for injecting a special acid into the dead vampires' bloodstream to neutralize the vampirina and keep them dormant. 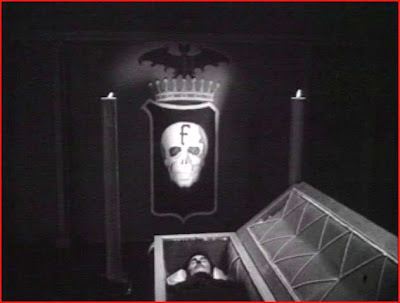 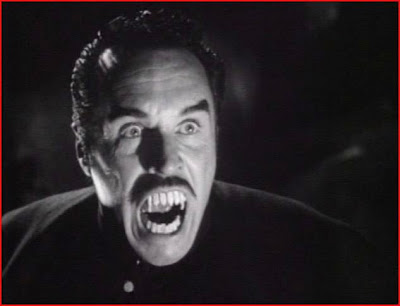 How's that for backstory? As we learned, The Bloody Vampire is a film that loves to explain things, including matters of dubious relevance to the actual plot. This Mexican film from that country's golden age of horror comes to American audiences via the questionable agency of K. Gordon Murray, the man who mutilated many a Mexican movie to fit a TV time slot. IMDB gives a 110 minute running time for the original Mexican version. The print available in Mill Creek Entertainment's Undead collection falls about fifteen minutes short of that time. Yet no one who's seen the American version, I suspect, would want it any longer.

The Cagliostros -- the Count and his daughter Anna -- are vampire hunters, but only gradually does it dawn on them, through the casual acquaintance of family servants, that one of their neighbors is their mortal enemy, the scion of the evil bloodline that cursed our hero's grandmother and caused her to be burned at the stake. The film's tone is set by its opening scene. It shows a coach travelling very slowly across a gothic Mexican landscape en route to "The Haunted Hacienda." We're told later that no vehicle can go as fast as this, but the coach makes Tombs of the Blind Dead look like drag racing. The slo-mo, it turns out, represents how quietly the thing travels, the wheels and hooves not even touching the road. And the coach has a very excellent driver: Death Herself. 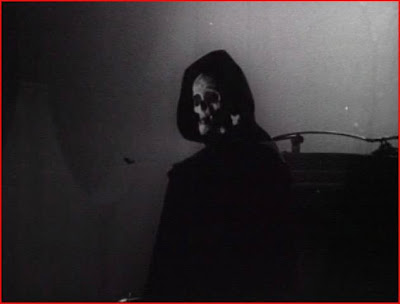 Wendigo appreciates that Morayta tried for an eerie effect here, but to be eerie we have to see something normal to compare it with first. Otherwise you're not sure what you're seeing -- a sensation we often felt this time out. Morayta has a lot of time on his hands and seeks out every possible way to waste it: redundant arguments between Frankenhausen and his mortal, javelin-wielding wife, whom he accuses of being insane for thinking he's a vampire; interminable exposition translated by K. Gordon Murray's team into that always-charming Z-movie arrogance ("Surely someone of your intelligence should be able to understand," etc.) that makes every scientist sound like an ass; detailed recipes for sleep potions assembled on the spot by a treacherous crone; a visit to a torture chamber and a bald torturer we didn't know Frankenhausen possessed until nearly 80 minutes into the movie. 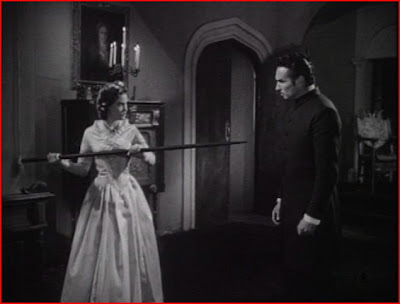 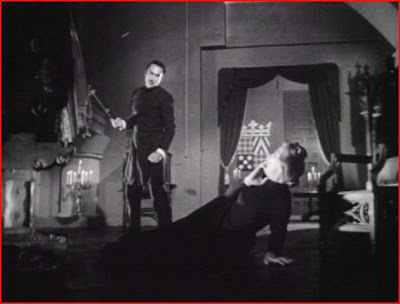 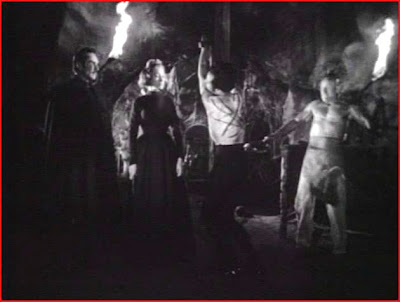 Vampin' aint easy: Frankenhausen's life is full of wife and servant troubles, but nothing that torture can't tidy up.

But nothing compares to an epic digression on the subject of coffee that occupies Frankenhausen and Anna's boyfriend the local physician for what feels like the length of another feature film, sponsored by the Mexican coffee industry. In the interest of your mental health I'll give only a sample here:

Doctor: Your Excellency, I am curious now that they are about to serve coffee. Do they refer to the drink that is so popular in Arabia?

Countess: You never did drink it?

Doctor: No, to tell you the truth. Coffee I understand is from Asiatic lands. It is obtained through infusion. I know that. The fruit is from a tree originally Ethiopian. Its name is coffee.

Doctor: Well, I've studied much alchemy as well as chemistry. In my work we prepare all the organic solutions that we know today, sir. I know about coffee only in theory, you see. I must admit that I haven't seen the bean yet. I can only guess what it's like.

...And on and on they go. This is one occasion when people must regret that Murray didn't cut a film enough. The Bloody Vampire is digressive to the point of delirium, but it has a surprise at the very end, after Frankenhausen has fallen for Anna Cagliostro, who has infiltrated his household as the new maid, the others having been turned into dead vampires during the Moonlit Night cycle; and after Frankenhausen has learned from his unfaithful servant Lazaro under torture that Anna is his enemy; and after his attempt to dead-vampirize her at The Haunted Hacienda is thwarted by the doctor and Cagliostro's scarfaced minion Justice (!?!) despite Frankenhausen's transformation into one of the biggest, ugliest and sort of cutest fake bats ever shown on film. The surprise: it isn't the end! The bunny-eared bat makes his escape to make plans for the sequel (The Invasion of the Vampires) while Cagliostro offers his sublime summation: "It's all over, except for the threat to mankind." 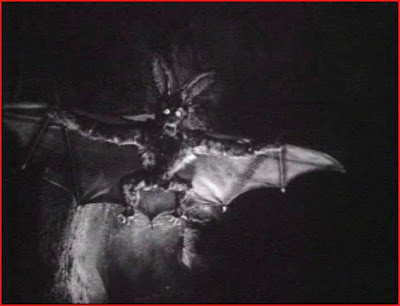 I can tolerate some pretty bad movies, and Wendigo can tolerate some really eccentric vampire cinema. Both of us had a hard time tolerating The Bloody Vampire. Wendigo found it entirely lacking in pace or momentum, and pointlessly convoluted and digressive. He found its dialogue deadly, the dubbers being determined to fit a syllable into every lip movement until the characters end up speaking the pompous, protracted way no one does in life. Its vampires and hunters seem equally ineffectual, and there seems little point to any of their activities -- or none that we'll see in this episode. Plot elements are introduced (like Cagliostro's vampire-killing machine and his need for mandragora roots) but never utilized, while Anna's infiltration of Frankenhausen's castle results in no actual investigation that we saw. On it's own, this film is just a jumble of stuff that doesn't reward the superhuman patience it requires to sit through it. 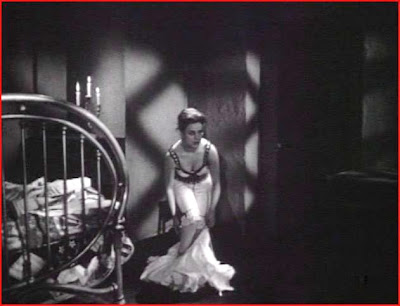 Wendigo will concede that in Begonia Palacios as Anna Cagliostro The Bloody Vampire has a comely heroine who is, for once, the most attractive female character in the film.

The film does have some decent production values, including reasonably authentic period costumes (the vampire looks cool except for his fangs) and some impressively deep sets (or location interiors). It has the right gothic look a lot of the time, and a respectable amount of sadism but the dialogue and tangled plot threads leave it looking goofy. It left Wendigo with no interest whatsoever in seeing The Invasion of the Vampires. Another round with the Frankenhausens and the Cagliostros is more than he can stand, though I might take a chance if I'm in the right mood. It's been a long time since he's seen a Mexican vampire film (on the old Commander USA show) but he knows that the country produces better bloodsuckers than this one.

Judge for yourself with this clip en espanol original, uploaded to YouTube by Ottolumiere:

Posted by Samuel Wilson at 8:00 AM

Wow--I do love that convoluted pseudo-scientific backstory, and that bat is one of the most amazing I've ever seen! It's a shame it couldn't maintain excitement or interest all the way through...but I imagine it might be worth seeing just for those shining moments. ;)

I enjoy this one, Sam. I have both this and the sequel and have reviewed THE BLOODY VAMPIRE as well.

To me, the coffee conversation didn't seem as long winded as you and another reviewer pointed out. Possibly, after having seen a fair number of the Mexi-horrors, many of them feature instances where characters babble on about any number of topics. Watching these subbed, the dialog rarely matches the English dubbing anyway.

INVASION, though, has the action. The invasion starts pretty much at the beginning when dozens of vampires (with the stakes still protruding from their chests) lay siege to the hacienda with the heroes trapped inside.

One thing about the Mexican vampire movies that I find refreshing is that they all are different in their approach to the mythology. WORLD OF THE VAMPIRES is one of the most fun as is SAMSON VS. THE VAMPIRE WOMEN. And the NOSTRADAMUS series which is sorely in need of a restoration. Also German Robles other two vampire movies, THE VAMPIRE and THE VAMPIRE'S COFFIN.

It sounds like they had some resasonably cool ideas. I guess it just shows that you need more than cool ideas to make a decent film. But I'm still tempted.

The length of this film, even in its truncated American version, took me aback and I probably responded a little impatiently during my first viewing. Wendigo and I did laugh a lot, though.

While reviewing the coffee scene and its aftermath for the screencaps, I decided that there was a sort of point to it, though it seemed hardly worth the effort. After the coffee chat, Countess Frankenhausen (whom Frau Hildegard has been trying to poison) falls ill. The doctor's first impulse is to suspect the coffee. It doesn't even occur to Frankenhausen to indulge this idiocy; he quickly observes that coffee doesn't have the effects the doctor fears, as camel drivers remain awake and alert on their desert journeys by drinking the stuff. The point of the entire sequence seems to be to establish that the doctor is a bit of a dunce, but I don't know if that's the point Miguel Morayta meant to make.

Thank you very much on the capacity of your information Very cool blog,

This is easily the worst film I have ever seen. It leaves me wondering if there's anyone from the production company left alive to sue. Bad beyond belief, a logic professor couldn't hope to follow any one of the plot threads, let alone the spaghetti dinner they create when combined. Somehow, the film becomes more confusing with repeated viewings. My IQ is 136 and I'm in a stupor, so if you're not a member of MENSA, don't go anywhere near this brutal mish-mosh, even if you've got a guest to get rid of. Destroy all prints!
-Douglas Antreassian

I know I'm commenting WAY too late. but I just discovered this review. I have had a bizarre affection for this admittedly ludicrous film since I first saw it when I was a child -- at which point certain images of scenes from it burned themselves into my brain, and certain moments in it really scared me. Frankenhousen running down the hall toward an intended victim, fangs extended and cloak flowing about him; a female "dead vampire" popping up out of her coffin like a jack in the box at his command; the torture of his servant, Lazlo, whose tongue gets cut out. The dubbed dialogue is absurd, yet I could feel the charisma of the actor who played Frankenhousen anyway. Some of the music -- violin stabs and strange electronic gurgles -- also unnerved and haunted me. When I see it now, I laugh a lot at it, but it still has moments that make my hair stand on end. I wish I could see it in Spanish with subtitles. It just has to be better than Murray's version. And I love the overall look of it.