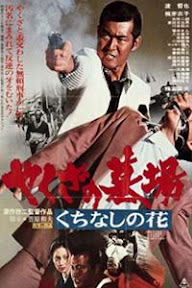 This late film in Kinji Fukasaku's cycle of yakuza films for Toei is regarded as a companion piece to the 1975 film Graveyard of Honor, which also stars Tetsuya Watari. I haven't seen that film yet, but Yakuza Graveyard stands out from the Fukasakus I've seen for a more romantic (or Romantic) sensibility befitting its doggedly doomed hero. Unlike Graveyard of Honor, this one's written by frequent Fukasaku collaborator Kazuo Kasahara, the scripter for the Yakuza Papers/Battles Without Honor or Humanity series and the police tragedy Cops Vs. Thugs. Watari, the star, is less known in America than the female lead, the formidable Meiko Kaji of Scorpion and Lady Snowblood fame. This isn't the sort of film where she can set things right by grabbing a sword or gun. Given a more fragile character to play, Kaji still invests it with authority -- her character, the wife of a jailed yakuza boss, is said to control the gang's purse strings -- and she does get to at least carry a gun at one point. But Fukasaku is as far away here from fantasies of invincible vengeance as he could probably get.

Watari plays Detective Kuroiwa, a cop who isn't above planting evidence on people, though the thug we see so treated probably deserved it. He starts out undercover in a pachinko parlor, contested territory for the established local gang and a larger, richer organization that's starting to muscle in. The local cops have an arrangement with the local gang, but the higher-ups seem to feel how the wind's blowing and urge the local yaks to come to terms -- except for Kuroiwa, who dares them to settle things the traditional, violent way. He has a conflicted relationship with the gang, feuding violently with an underboss while falling for Kaji's quasi-regent. In Keiko he recognizes another damaged soul. He hasn't shaken off the effects of killing a man in the line of duty years ago. He's shacked up with the victim's girl and has been scraping together money in order to buy her her own business, a bar; the girl alternates between open contempt for him and suicidal demands on his attention. He seems happiest alone in his desolate high-rise apartment listening to loud music. Keiko is half Korean and her imprisoned husband, her onetime pimp, despises her for it. "Why aren't you dead already?" he demands when Kuroiwa takes her for a visit to his prison. Afterward, Keiko wants to throw herself into the ocean. A drunken Kuroiwa stops her and then goes From Here to Eternity on her on the moonlit beach.

Meanwhile, Kuroiwa bonds with his erstwhile enemy the underboss, going from a brawl with him at a yakuza ceremony to a night on the town with two American hookers. When the gangster points a gun at his face in the morning, Kuroiwa's indifference cements their new friendship, which results in a sworn brotherhood that threatens our hero's position in the force. With Kuroiwa's encouragement, he goes to war with the rival gang, but by now the cops are openly on the other group's side. They convince a gang subordinate to capitulate once Kuroiwa's friend is out of the way, and when that happens everyone, including Keiko, assumes that Kuroiwa is a rat. Can our hero turn the tide in his favor? Don't bet on it....

I'm still a long way from seeing even a majority of Fukasaku's work, so I don't know how exceptional Yakuza Graveyard is stylistically, but there did seem to be more moments designed for pure pictorial effect than in his other films. There's a breathtaking long shot of a drab, geometric apartment complex that zooms in slowly to catch the insect-like Kuroiwa walking a path alone. When he takes Keiko to his apartment, he opens a window and lets in the wind. It blows a wintry note through the curtains and his open shirt as if he were a gothic antihero living in a tower. The scene with Keiko on the beach is another unusually romantic moment, though its the romanticism of desperation and pure need on display here.

At the same time there are more typical Fukasaku effects all over the place. The fight scenes are done in his incomparable hand-held camera style, the violence of the camera's spasmodic movement accentuating the brawling, beating and shooting in each shot. Stills or screen captures can't really do justice to these scenes, which have the realistic effect of obscuring the action rather than choreographing them for maximum clarity. This particular film gets a little psychedelic, too, in illustrating the effects of truth serum on an already disoriented Kuroiwa.

Graveyard of Honor inevitably lacks the sweep of the five-film Battles series, and it doesn't pack the full punch of Cops vs. Thugs, but it has enough distinctive virtues, including the urgent performances of Watari and Kaji, to earn its own recommendation. The filmography of Kinji Fukasaku is an ongoing revelation of bitter little treasures, from the antiwar invective of Under the Flag of the Rising Sun to the cynical samurai epic Yagyu Clan Conspiracy to the apocalyptic misanthropy of Battle Royale. Not everything is a masterpiece, but Fukasaku hasn't disappointed me yet.

The Japanese-language unsubtitled trailer is three minutes of mayhem and Meiko Kaji on smack, uploaded to YouTube by asianwack.

Posted by Samuel Wilson at 9:37 PM

Another great write up, Sam. I have this one, too, but haven't watched it yet. Have you seen Fukasaku's MESSAGE FROM SPACE or LEGEND OF THE EIGHT SAMURAI? Both are fantasy films. The former is a STAR WARS clone modeled on the Satomi Hakkenden tale and the latter is also an adaptation, but set in its original period setting.

venom5, I think I have Eight Samurai in a box set but I haven't looked at it yet. To be honest, I have less confidence about Fukasaku's 80s work due to the fantasy elements, which don't seem to play to what I take to be his strengths. But that and VIRUS (Mill Creek copy) are due for future viewings.