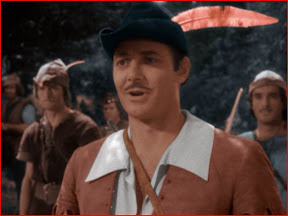 Maud: This is Robin Hood, milady. 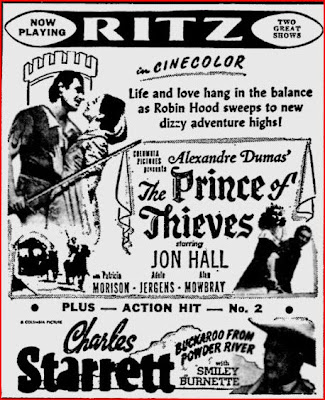 Anticipating a surge of interest in anything pertaining to Robin Hood due to Ridley Scott's new film, Sony Pictures Entertainment has released a number of Sherwoodian features from the Columbia Pictures library. Rather than combine them into an "Icons" collection, Sony released each as an individual and inevitably overpriced DVD. The Albany Public Library took a chance and acquired one of them, so I took a chance and watched it. 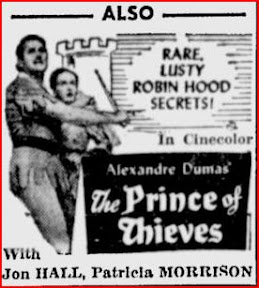 Columbia apparently had a success with the 1946 film The Bandit of Sherwood Forest and decided to exploit it by advertising a film full of "rare, lusty Robin Hood secrets." Along with that salacious promise came literary prestige. The Prince of Thieves is based (how faithfully? I dunno.) on one of two novels Alexandre Dumas wrote about the English hero, and the French author gets name-above-the-title billing here. This project was entrusted to arch-exploiter Sam Katzman, who made serials like the first Batman film for Columbia while producing Bela Lugosi's legendary B-horrors for Monogram. For Katzman a Robin Hood film was upmarket, and he marked the occasion by having director Howard Bretherton work in color -- Cinecolor. An economical, inferior alternative to Technicolor, Cinecolor was ideally unsuited for a Robin Hood movie because it was incapable of producing the color green. Our bandit thus romps through a blue-grey forest, his firehouse-red boots treading upon blue-grey grass. Red Cinecolor can do, though not subtly. Will Scarlett has never lived up to his name so intensely, for instance. The Merry Men can attack at night, one supposes, by the radioactive glow of Will's vest or the feather in Robin's cap. Blues are equally vivid, unnaturally so. Sherwood Forest and environs seem to be watered by a river of mouthwash. Watching this film on a high-definition TV was something close to a psychedelic experience, though the imagery might inspire seizures in other viewers. 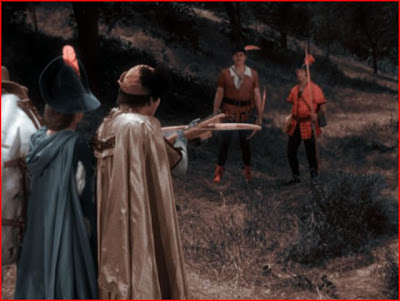 For safety purposes, this is but a mild sample of the eye-blasting
Cinecolor imagery of The Prince of Thieves.

For the role of Robin Hood, Katzman recruited Jon Hall, late of Universal's Arabian Nights absurdities. From the moment he asks visitors, "Where ya goin?" you begin to think fondly even of Kevin Costner, though Hall is at least a more or less merry man. He probably counted as an action star or a swashbuckler in his time, but there's little proof of any prowess in that line here. In one fight scene a very obvious double does the swordplay for him, and at the end he finishes off his main antagonist offscreen. 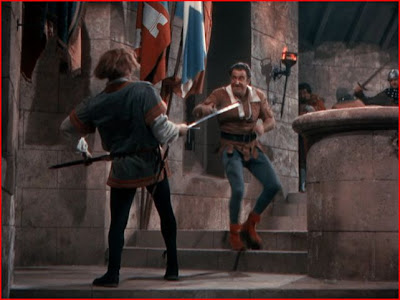 Jon Hall's stuntman can't even be bothered to wear a matching moustache -- not that it would have helped much -- in this not-so-crucial fight scene.

Like all men of medieval England, our hero is a master of that dangerous science: underarm swordfighting. Those trained in this careful discipline can catch an enemy's thrust between bicep and armpit and wrench the weapon out of his hands. Error is fatal, however. Just as many men in this picture appear to catch swords in the exact same fashion, or even spears, yet end up dead. My theory is that some of these blades are poisoned. My proof: in one shot, Robin runs his sword across the apparently unharmed belly of an enemy, not through it, but the man falls lifeless to earth. How did Robin do it? It's one of those "Robin Hood secrets" that the film never gets around to explaining. 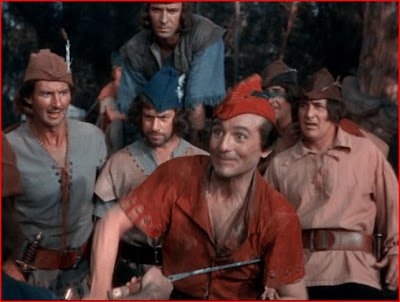 Michael Duane tensely explains one of the fine points of English underarm swordfighting.
The big "secret" here, if you must take the ballyhoo seriously, is an alternate account of how Robin met Marian. According to Dumas, Katzman and his writers, Marian's the sister of Alan Claire and travels with him through Sherwood toward a rendezvous with Alan's beloved Lady Christabel. Robin saves them from a renegade archer and decides to help the Claires, loyalists toward the still-absent King Richard, rescue Christabel from an arranged marriage to a Norman nobleman. This involves a raid on the magical castle where Christabel lives. I call it magical because it appears to be encased by a Cinecolor-blue wall at night; you can see the seams of the panels on a good-sized screen. But no sooner is Christabel freed with the help of Maud the maid than Marian is taken as the intended bride of another Norman bastard. You can't say you don't get your 72 minutes worth of action in this film, but apart from the underarm technique it all tends to blur together. The antagonists probably wouldn't be much of a threat to the Three Stooges, and you could hardly have a happier ending than this one's triple-wedding ceremony. Robin Hood completists will want to see it, but for the rest of you I can only echo the conspicuously nameless Friar's comment I quoted above. For all its candy-colored clumsiness, The Prince of Thieves is really quite harmless, and it's dumb enough to be fun for the right crowd. 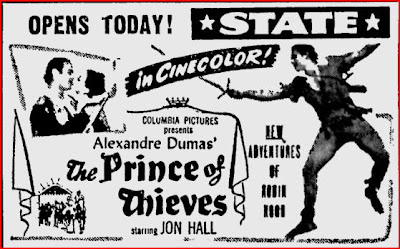