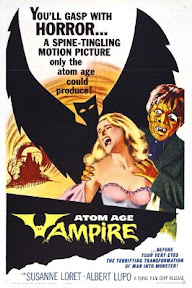 It wasn't much of a meeting this time. For starters, Mill Creek Entertainment included this in its new Undead:The Vampire Collection box set in the same spirit with which an American distributor named it "Atom Age Vampire." It isn't exactly an accurate title, but how much more so is the original -- "Seddok, the Heir of Satan?" Worse, the Mill Creek copy is gravely mutilated. According to IMDB, Seddok in its original Italian form ran for 105 minutes. The American theatrical version, the original "Atom Age Vampire," ran for 86 minutes. You can see this version for free online from a number of sources, and you'd think that'd be good enough for Mill Creek. But no: they had to pick up what we presume to be a TV copy (which also seems to be partially letterboxed) that is all of 69 minutes long. A quick comparison of editions shows that the Mill Creek copy leaves out extra Atom Age Vampire attacks and nightclub dance numbers. But here's the worst part: My friend Wendigo and I looked at this appalling truncated edition -- and thought it was padded. 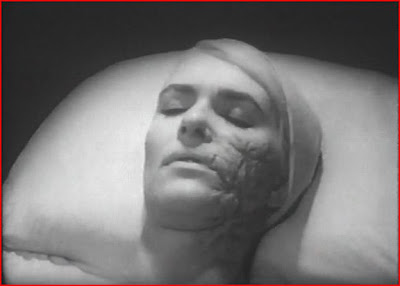 Once-lovely Jeanette is disfigured for life, unless the Atom Age Vampire can save her -- by killing people. 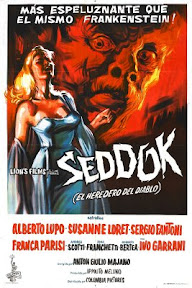 Wendigo is happy to say without reservation that Seddok is not a vampire movie. There's no way around the fact that it's a mad-scientist movie of a very old sort. It's the hoary legend of the scientist with a sickly wife or child whose treatment depends on extracting some substance from living persons (e.g. spinal fluid, glands) in a way that kills them. In America it goes back at least as far as Boris Karloff in The Ape, and it was Bela Lugosi's stock in trade at Monogram. Wendigo has seen a version of the motif as recently as an episode of Supernatural. In many cases the scientist disguises himself as a monster in order to cover his trail. In Seddok, the mad Professor Levin (Alberto Lupo) takes this idea to atom-age extremes by mutating himself into a lumpy, hoodie-wearing stalker by injecting himself with Derma-25, a failed predecessor to Derma-28, the miracle compound (derived from glands) with which he hopes to cure disfigured nightclub dancer and car-accident victim Jeanette (Susanne Loret). So he's a monster, though naming him heir to Satan is still a stretch. But he hardly counts as a vampire if he's extracting a vital fluid for someone else's benefit. In fact, the whole "atom age vampire" gimmick is imposed on the picture in the English dub when an inspector speculates that a disgruntled Japanese radiation victim may be doing the killings -- "like a vampire of the atomic age," no less -- despite the prevailing theory that an escaped gorilla's doing it. This professor is a sharp character. He tells Levin at one point that he knows him "intimately," having read his writings and watched his TV interviews. But when the doctor offhandedly mentions his research, our top cop asks, "Which research, exactly?" 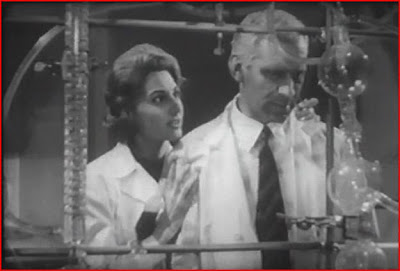 Dr. Levin ignores the love of his dedicated assistant (above), only to find himself reduced to picking up random streetwalkers while hopelessly pretending to be a hip youngster in his fashionable threads (below). 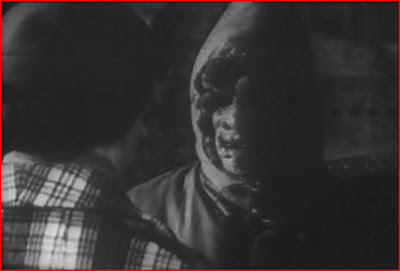 While Wendigo recognizes the obvious U.S. Poverty Row influences on Seddok (there's even those beloved mainstays, the mute servant and the nosy reporter), I saw that it was also a cheap knockoff on what was arguably the most influential European horror film of its time, Georges Franju's Eyes Without a Face -- another tale of a doctor mad to cure a girl's disfigurement. And for all I know, the invocation of Satan in the title is a nearly-instant ripoff of the other most influential Euro horror of the era, Mario Bava's The Mask of Satan -- better known in the U.S. as Black Sunday. Director Anton Giulio Majano and his writers try to stake out their own sci-fi territory with Marvel Comics level buncombe about the mutagenic power of radiation. Their brilliant notion is that, since radiation disfigures people, it could be used to redisfigure or undisfigure already deformed people like our poor Jeanette. In the world of Seddok this works, since radiation is an antidote to Derma-25, as is the sadly limited and temporarily efficacious Derma-28. But I'm not clear on the limitations of Derma-28. Dr. Levin's attractive female assistant Monique shoots herself up with 25 in order to goad him into testing 28 on her arm. It works, and as far as we know it works permanently on Monique, but when he uses it on Jeanette's face the cure quickly wears off, requiring him to exhaust his supply of synthesized 28 and resort to lethal gland extraction. We're assuming that Monique's arm never turns nasty again, and that she'd never turn into a monster, but since Levin kills her for her glands (and for being clingy, needy and jealous) it's probably a moot point. 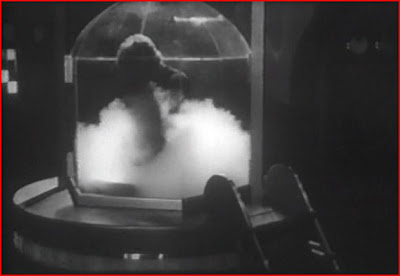 After a mutating Derma-25 treatment, be sure to clean yourself off with some good, steamy radiation. Be sure to open the container and release the radiation into the atmosphere when you're done.

We may seem to be describing some mad science and weird goings on, but you have to have a deep love of low-budget, brutally-edited, badly-dubbed, black-and-white, pre-sexploitation Euro horror to endure even the shortest edition of Atom Age Vampire. Even in its original form, Wendigo suspects that the project was uninspired on any level. Its completely derivative nature could be forgiven if the filmmakers or performers showed any panache, but neither the original creators nor the English dub scripters and actors show any imagination. It looks more like a cheap TV show of the time than a film -- and that's probably how most Americans first saw it. It didn't surprise us to learn that Majano mostly worked in TV afterward. It fails on even the simplest level: as the beautiful, doctor-maddening dancer Jeanette, Susanne Loret isn't even more attractive than Franca Parisi as Monique the jealous assistant. Wendigo could not take his mind off the star's beak-like nose, and he could not stand her dubbed whining and griping.

Wendigo might think differently if he ever encounters the unedited Seddok, but Atom Age Vampire didn't even work as camp for him. He likes a good bad movie as much as anyone, but such a film has to be trying to do something, while this film only seemed to be trying to make a buck.

The trailer for Atom Age Vampire is far more entertaining in classic exploitation fashion. This copy was uploaded to YouTube by CrowTRobot1313:

Posted by Samuel Wilson at 9:03 PM