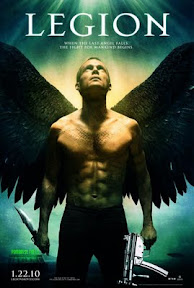 It's one part The Prophecy, one part Night of the Living Dead, one part Terminator (or its sequel) and one part The Petrified Forest. A dead end diner in the desert called Paradise Falls is ground zero for the End Times, only things aren't playing according to Scripture. God's in one of those moods again and has decided to wipe out mankind. But forget about that "fire next time" crap. The divine plan this time is to have his loyal angels possess the weak-willed, turn them into sharp-toothed, ceiling-crawling critters, and set them to attack the strong before they presumably wipe one another out. But before all else the hordes must hasten to that desert diner, where a cigarette-smoking pregnant waitress must decide whether or not to keep the baby. They would rather she didn't, but the Archangel Michael (Paul Bettany) arrives with a pro-life message. He's defied God and torn his wings off in order to save mankind, the stipulation being that the big guy will back off if this baby gets born. Fortunately, Michael looted an LA gun shop before dropping in, because there's a few hundred folks outside who need to die.

It's not quite the standard collection of types -- I missed the little old Jewish man -- but some things are still done the old way. The two black characters die early, and both pretty pointlessly, for instance. I suppose the creators think they're being badass by giving everyone a potential character arc, only to cut some short until we're down to a final two. Problem is, this is the sort of film where you assume that most of the cast will die, and that makes it hard to invest any emotion in any of the characters. A really daring film of this type would be the one where everyone sticks together and a majority actually survive. This film, despite its pretensions to sacrilege, isn't that daring.

Scott Stewart's film does have a few interesting moments. I dug the angel combat, when a swing of a wing can deflect a bullet or rip a belly open. There were a few presumably intentionally funny moments, like when beery diner owner Dennis Quaid challenges Bettany at gunpoint to "show your goddamn teeth!" But it's basically a collection of influences, a movie made of parts of other movies that doesn't quite live. It's not even inspired enough to be truly bad. You may even find it passable company for 90 minutes or so if you're in the mood for a shoot-'em-up with some fantasy thrown in. But you'll probably find it less memorable than its various source materials.
Posted by Samuel Wilson at 11:46 PM

I got dragged to the theater by a buddy to see this one, and despite some back-of-the-head hopes that it would have fun with the rules and forge something interesting with its premise, I likewise came away with the feeling that it was basically a patchwork of ideas that plays it relatively and disappointingly close to the vest.

You did mention some of the nice touches here, and I thought Bettany managed to do some interesting stuff with the role, but you nailed it with the "less memorable" comment; I don't know if I've even given this one a second thought since I saw it.

Thanks for writing, Drew. Legion's narrowness of scope and lack of imagination disappointed me most. It's the sort of thing that'll be instantly dated because of its decision to make Michael something that might pass for cool in 2010 rather than something genuinely fantastic. I'm not religious myself, but I'd expect that the apparently irrefutable proof of God's existence and wrath would weigh more on the characters than it does.