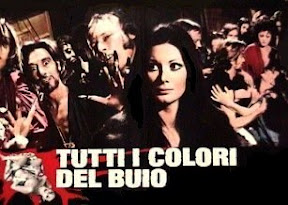 Sergio Martino's film opens with a dream of a three women murdered -- a naked pregnant woman, a spastic crone, and an attractive young woman. The dreamer is the dreamy Edwige Fenech, playing Jane Harrison, an Englishwoman who suffered a miscarriage in a car wreck. This is one of those Italian horror films that sets the action in England, as if that were the realm of horror par excellence -- just as the English set many of their own horror films somewhere in Mitteleuropa. Anyway, Jane isn't fully recovered from her ordeal yet. The mental part is the hardest. She imagines herself stalked by a blue-eyed slasher, and Martino will have you believing it, too. That stalker, real or not, proves to be the least of her worries.

The many faces of Edwige Fenech
When psychotherapy proves inadequate to ease her fears, her new friend Mary suggests joining this lovely group that she belongs to. It's the kind of group where you change into robes and go barefoot into the basement, and the host welcomes you with a draught of fresh dog's blood, and then everyone rapes you during a Black Mass. If it all happened, that is.

I last saw Julian Ugarte as a religious-fanatic outlaw in The Stranger and the Gunfighter. He seems to have been Europe's go-to guy for crazed zealots in the early 1970s.

Tutti i colori del buio keeps reality uncertain until very near the end. Any atrocity you see could just be a vivid dream or one of Jane's paranoid delusions. It grows more suspenseful as the stakes rise, especially once the cult leader (the typecast Julian Ugarte, sporting press-on talons) induces Jane to kill Mary, though Mary helps a lot by virtually throwing herself upon Jane's dagger. Now determined to escape the cult's influence, Jane takes flight, with the blue-eyed slasher in apparent pursuit. But is the cult pursuing her or guiding her hand to strike at its enemies through her? Who can say so long as, at one moment, she's stabbed her husband to death in an elevator, and in the next he's alive again? Anything you see might be the delusion of a madwoman, but none of it can be dismissed as long as we don't know for sure.

In short, All the Colors of the Dark (which reached the U.S. in 1976 as They're Coming to Get You, a title that taps into the paranoid vibe but lacks the original's enigmatic elegance) is an often-effective psycho-Satanic thriller. It works as a story thanks largely to Edwige Fenech's intense lead performance. She delivers the goods both as indisputable eye candy and as a convincingly disturbed but never helpless heroine. Above and beyond the story, Colors works even more effectively on a pictorial level. It's an Italian film that shows the recent influence of Vittorio Storaro's work on The Conformist, down to the low-angle shots of blowing leaves. Miguel F. Mila and Giancarlo Ferrando make the most of the English landscape and architecture to give the film a neo-gothic atmosphere, while working the dreams and dreamlike ordeals of Jane for maximum weirdness.

Martino pulls off some disorienting tricks of his own, repeating shots of Ivan Rassimov as the blue-eyed attacker as if the scene was looping out of control in Jane's head. In this movie "dream logic" is essential to maintaining suspense rather than a distraction from it.

Ivan Rassimov makes a point, repeatedly, in All the Color of the Dark.
Strangely for an Italian film of this period, the one area where Colors drops the ball somewhat is the musical side. The otherwise-dependable Bruno Nicolai contributes some effective suspense music, but the main theme for the cult doesn't strike the right note of menace. It sounds too festive, almost too campy to sustain the appropriate sense of dread while the cultists work their mojo on Jane. But at worst the false notes of the score are distractions, not handicaps, and in any event Colors is more an entertainment than a classic horror film. It has plenty of anxious and creepy moments, but it's a film to be enjoyed as a visual experience, both for Martino's expert direction and the natural wonder of Edwige Fenech. The best recommendation I can give this film is the fact that I'm off to Netflix to find more films from Martino and Fenech.

Here's the original English-language trailer, uploaded to YouTube by braniki1:

And here's an American trailer for "They're Coming to Get You," uploaded by MediaB:
Posted by Samuel Wilson at 10:16 PM

One of my favourite giallos.

Interestingly enough Samuel, the title of this film is also the one chosen by Tim Lucas for his towering coffee-table sized study of Mari Bava. (a book that I proudly own and cherish). Sad to say I haven't seen this film, though I appreciate the review as both a motivational device and for it's typically high-quality erudition. Looks like the horror people over at WitD need to consider this one, though I can't be sure they have seen it. I'll definitely be linking this review later today to the current horror countdown thread.

Yes the revamped title does seem to have enigmatic elegance, as it does for Lucas's volume.

Fenech's lead pwerformance appears to be in and of itself a reason to see it, though that's too bad the music was ineffective.

d: It left me questioning whether it qualified as a giallo, given its relatively light body count, but in terms of cinematography and overall atmosphere it definitely fits the description.

Sam: As a Video Watchdog reader I'm well aware of Lucas's eccentric choice of title (though it does fit the subject) and I envy you your ownership of his famous tome. I'd bet all your horror countdown crew have seen Colors which is one in a very competitive field of gialli.

Thanks also for the chance to remind readers that a major horror countdown remains underway at Wonders in the Dark. It's recommended reading for all horror fans.

Thanks so much for that shout-out and those kind words Samuel!