Patty Hearst was still a hot topic when United Artists picked up Giovanni Fago's crime drama, which has little else to recommend it from an exploitation standpoint, for American distribution. I gave it a chance as a Netflix instant streaming video, expecting a typical Italian tough-cop movie, with the redoubtable Henry Silva as the cop, but Fatevi vivi fell somewhat short of that. Silva's Commissario Caprile talks tough but accomplishes hardly anything here. 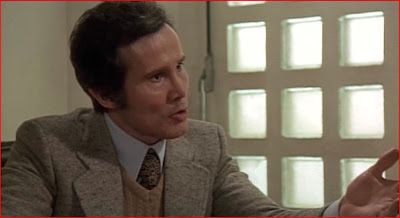 Caprile has to solve the kidnapping of an industrialist's young daughter, but he uses the crime as an excuse to harass his old enemy, crime boss Frank Salvatore (Gabriele Ferzetti, "Mr. Choo-Choo" from Once Upon a Time in the West). Salvatore has clout enough to get Caprile transferred or kicked upstairs whenever he becomes an annoyance. Now that he's an annoyance again, Salvatore figures that the best way to get him out of his hair is to solve the kidnapping himself. It's an expedient as old as M, and it's hard to go wrong with it, especially when the mobsters prove more effective investigators than Caprile's cops. Meanwhile, the three masked kidnappers (one a drug-addict played by Rada Rassimov) answer to "the Professor" (Phillipe Leroy), who slowly eliminates his accomplices on his way to a speedboat-chase showdown on Lake Como with Salvatore's gang. 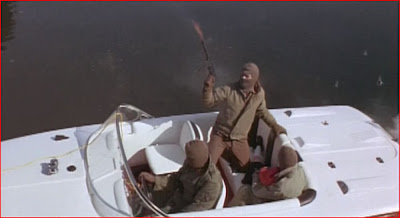 Masks help our kidnappers make a dramatic entrance (above) but viewers may consider it a waste for Rada Rassimov (below) to keep her mask on for much of the rest of the picture. 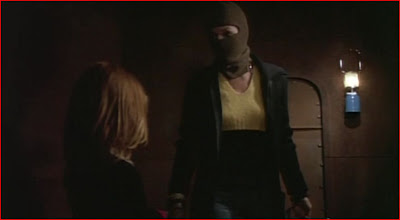 If Kidnap isn't really a cop film, it isn't really a mob film, either. Nor is it much of a kidnapping movie, since we learn nothing about the Professor's motives or anything else to make him an interesting villain, and we never get a strong sense of the child's peril until the speedboat chase. None of the characters is very deeply developed, though Silva and Ferzetti get some nice, sociable ball-busting scenes together. A prostitute who witnessed the kidnapping (Lia Tanzi) is set up as a pivotal character -- largely ignored by Caprile but intimidated into cooperating with Salvatore, she stumbles upon a crucial clue twice over in a big coincidence -- but gets forgotten by the film once her specific plot function is over. As far as Fago is concerned, Tanzi's main function may have been to perform the obligatory topless scene. He directs with little emotion or engagement, draining the film of most of its dramatic or exploitative potential. At the climax, you do wonder whether he'll go all the way and kill the child, but the action footage shot on the water comes out misty and smeary. 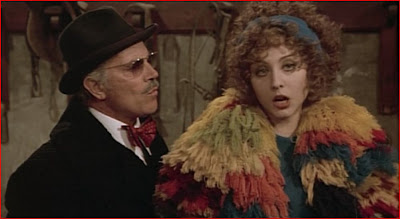 Gabriele Ferzetti is about to make Lia Tanzi an offer. Will she refuse?
Kidnap isn't an outright bad film -- Silva makes the most of his limited role, the other actors don't embarrass themselves, and there's a good score by Piero Piccioni -- but it's the sort of movie that leaves you asking, "Is that it?" after 99 minutes. I expected plot twists, like the exposure of secret collaborators with the kidnappers, that never arrived, and the story had nothing unique to say or show us about cops, crooks or kidnappers. Unfortunately, that is it.
Posted by Samuel Wilson at 7:19 PM

excuse me my friend can you tell me if you have the film...
Fatevi vivi: la polizia non interverrà (1974)
cause im lloking forward all the internet and dvd clubs here in my country and i cant find it anywhere..
my e-mail is rhtoras@yahoo.gr if you have any way to see this movie i'd appreciate it,,,thanks alot!!!