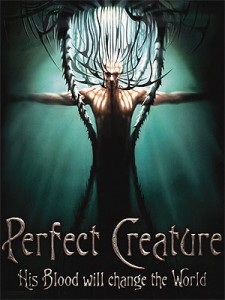 My friend Wendigo and I were planning to watch Tobe Hooper's Salem's Lot this past weekend, but when Wendigo saw that SyFy was running Glenn Standring's sci-fi vampire film he suggested we look at that instead. No screencaps, alas, but it's worth doing without to learn why Wendigo recommended an edited-for-TV version of a film he has only seen edited-for-TV to date. The main reason he recommends it is because you're not likely to find another vampire film like it.

Written and directed by Standring, who hasn't made a feature since, Perfect Creature is a steampunk vampire film set in "a world not unlike ours," yet one in which a 17th century Italian alchemist discovered the principles of genetics ahead of schedule. One result of his research is "the Brotherhood," an all-male cohort of mutants who have heightened strength and senses, fangs, and a dependence on human blood. The Brothers, who don't reproduce sexually or by biting, but by random mutation only, were quickly integrated into western civilization after a brief period of persecution, until they stood at the center of the Church, where humans make voluntary offerings of blood. In return, the Brothers serve man, though some might ask who the servants are, and who the masters. In any event, Brothers and humans enjoy a sort of symbiotic relationship that symbolically merges them, according to Brother theology, into the "perfect creature" of the title.

After a prologue showing the birth of a Brother and his prompt adoption into the Brotherhood, we're introduced into the late 20th century, where technology, after having ran ahead of history heretofore, seems to have stagnated. Cars and TV exist but are relatively primitive, though I admit that I don't know exactly what year the story's set in. We do know that by that time there hasn't been a new Brother in the last 70 years, while the still-immortal Brothers are dedicating their knowledge to fighting nasty strains of influenza that are plaguing humanity. It's not a good time for a Brother to start running amok and biting necks in (for all we know) unprecedented fashion for these eminently civilized creatures.

As the Jamestown police investigate, they're assigned a liaison, Brother Silas (Dougray Scott), who learns that the killer is the baby we saw at the start of the film, his own brother by the same mother, Brother Edgar (Leo Gregory). The Brotherhood seems to believe that Edgar, one of their leading flu researchers, may have been infected while working on vaccines, but Silas and Detective Lily (Saffron Burrows) eventually learn that Edgar was up to something secret, a side project designed to breed fresh Brothers, with unpleasant consequences for himself and possibly worse consequences for humanity....

Perfect Creature interested me because the steampunk context allowed Standring to state baldly what I take to be an underlying assumption of much modern vampire lore; instead of carriers of a curse, they're simply a separate race of superior beings. The Brothers aren't inherently evil, from the evidence shown here, and for all we know the deranged Edgar is the first one ever to hunt humans. The film interested Wendigo first and foremost because it's so different from anything else and committed to its own rules. "Vampires" (a term never used in the movie) don't represent much of what they normally do. Its pseudo-naturalistic concept of vampires isn't exactly unprecedented, but Standring takes it to an extreme, excluding any supernatural abilities apart from the usual heightened strength and senses, and all supernatural vulnerabilities. Standring has invented a world in which vampires are revered (by most), not feared or hated.

Why have vampires at all? Wendigo says that they illustrate the pitfalls of genetic manipulation, for starters, and also an untrustworthy religion in which people have placed an eventually unjustified blind faith. They've stunted any scientific development that they haven't monopolized as their own province. Vampirism has certain blasphemous resemblances to Christianity, so a vampire church is a naturally provocative idea. Whether we can make the reverse inference that churches are vampiric is another matter.

Wendigo also likes the sense of a thought-out fantasy world that doesn't need to be explained to us in full. We can draw inferences about the relationship of the Brotherhood to the Catholic Church or to the British Empire, but Standring doesn't feel a need to fill in the blanks and bloat the film with exposition. Perfect Creature is a mix of many different genres: steampunk and vampires, most obviously, but also film noir, outbreak film (complete with doomsday "destroy the community to save it" scenario) and a little bit of infected-human fun as well. It coheres better than that description might make you think, though you can still see the seams easily enough to call out the genres as they surface.

While the unfortunate Dougray Scott (offered Wolverine, he chose Mission Impossible 2 instead) stars as Brother Silas, Wendigo was most impressed by Saffron Burrows as Detective Lily. The film takes for granted female career advancement, however inconsistent that may be with the overall cultural stagnation, and Burrows plays a straight cop role while retaining a femininity that Wendigo thinks is too often lost by actresses playing tough. She isn't eroticized, though; Wendigo noted with some smugness my surprise that she never got turned into a Sister or even fell that hard for Silas. Scott himself has the bigger challenge of portraying the slow emotional awakening of a repressed person. He has the detached coldness, at first, that characterizes some classical vampires, but Silas is neither a seducer nor a hunter. While Edgar wants Silas to join him as a mad hunter of humans, you never feel that he's tempted in the least, or that he even has an instinct to hunt. He's as chaste as Edward Cullen, but there's no sense that he's holding back or struggling with evil impulses. He's very much like a priest renouncing his faith instead. That may make him a poor vampire for some viewers, but for Wendigo it makes Silas a uniquely interesting fantasy character. As Edgar, Leo Gregory is an unconflicted slobbering villain, and Wendigo found him uninteresting precisely because he was the nearest thing to a generic vampire in this picture. There's no tragedy to his plight because we don't see him between babyhood and insanity. Because the background villainy of the Brotherhood itself is rather abstract and vague, there's no real evil here to make horror part of the film's elaborate equation.

Standring left Perfect Creature open-ended, promising Silas's resistance to the Brotherhood's repressive power and the eventual rise of a Sisterhood with fresh implications for humanity as a whole. The film bombed, apparently, going straight to DVD in most markets, so the story ends here. Wendigo regrets its failure, since he enjoyed Standring's imaginative vision and the neo-Dickensian art direction, but he understands it. It's far from perfect dramatically; it could have ended an hour early with the menace contained but for some inexplicably stupid decisions, for instance. More importantly for many potential viewers, while it has some of the trappings of a vampire film, it simply isn't a horror movie and isn't anything Wendigo would recommend for Halloween viewing. But fans of steampunk and science fantasy, if they look past those same vampire trappings, should find the film a worthwhile experience.

Posted by Samuel Wilson at 8:39 PM

You know, I almost watched this on Syfy, but being Syfy and a vampire movie, I decided against it. Sounds like I should have given it a shot.