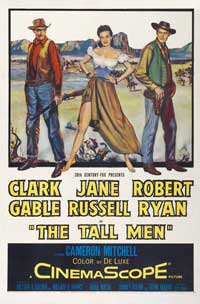 When Hollywood adopted widescreen processes starting in 1953, Raoul Walsh had a head start on other directors adapting to the new aspect ratios. He'd directed his first widescreen western way back in 1930, using the short-lived Grandeur format to shoot The Big Trail. Best known as John Wayne's first starring role, that film has an archaic grandeur (no pun intended) that's only enhanced by the stilted performances by Wayne and the other actors, while Walsh's widescreen location work makes the movie resemble a window on the authentic Old West. Walsh's next widescreen western, released 25 years later, doesn't have quite the same primitive power, but it has much of the same pictorial sweep -- and the acting is somewhat better.

Adapted from a 1954 novel by the many-named Clay Fisher, now back in print under the author's more familiar Will Henry tag, The Tall Men follows the fortunes of the Allison brothers, Ben and Clint, former raiders with Quantrill now down on their luck in a Montana winter. Reduced (some might say reverting) to outlawry, they propose to ambush a man with a moneybag, but the man, Nathaniel Stark (Robert Ryan) convinces the Allisons that they can make more money if they follow him down to Texas and bring back a herd of cattle for beef-starved Montanans. While hothead younger brother Clint (Cameron Mitchell) would just as soon shoot Stark or any "jasper," levelheaded elder brother Ben (Clark Gable) sees an opportunity to earn his way to owning his own ranch. Early on the way south the trio encounter a group of stranded pioneers, including one woman, Nella (Jane Russell) who seems made of sterner stuff. After dining on "Missouri elk" (mule to you), Stark and the Allisons are on their way again, but Ben insists on turning back to help the pioneers when it looks like Indians are attacking. He finds the pioneers scattered and dead, Nella alone having kept her cool and stood her ground to survive. Ben and Nella find more stable shelter and get it on for a night, but find themselves incompatible. The orphaned daughter of failed ranchers, Nella has contempt for Ben's ambition, while he sees her as a gold-digger. She confirms that impression by attaching herself to Stark once everyone's reunited.

All four main characters end up making the trip back north with Stark's herd, accompanied by a gang of cowboys loyal to Stark and a band of vaqueros loyal to Ben. Along with the perils of the journey -- Indians, jayhawkers and natural obstacles -- there's tension on all sides of the triangle linking Ben, Nella and Stark, while Clint grows more unstable and dangerous the more he drinks. Even if everyone makes it to Montana, there's no guarantee that everyone will leave the territory alive....

The Tall Men belongs to the subgenre of "superwestern" rather than the "adult western" category, though Walsh's film is by no means childish. While lower-budgeted westerns like those of Randolph Scott and Budd Boetticher make the most of imposing locations, for Walsh the vastness of the landscape is just an appropriate backdrop for even more impressive masses of men, horses and cattle. This is a big film, as the title tells you in a manner typical of the era that also gave us The Tall Texan and The Tall T, not to mention Abraham Lincoln as The Tall Target. There's an obsessiveness about tallness in the advertising that makes male height a kind of counterpart to female breast size, as if Gable and Ryan must be giants to share the screen with Jane Russell. Oddly, Walsh seems more interested in Russell's feet than in her more famous attributes, giving her every opportunity to kick off her too-tight boots and have someone massage her naked tootsies. Tarantino probably loves this film. On the other hand, probably because Russell's recent hits had been musicals, she's given songs to sing that I could have done without. Overall, though, she gives a strong, hard-boiled performance that suits her role, while Cameron Mitchell probably could already do a drunken hothead in his sleep -- and maybe he did.

The most interesting thing about The Tall Men is the rivalry between Gable and Ryan's characters. Ben Allison and Nathan Stark are both cool calculators, Stark noticeably the cooler of the two. You'll never take him seriously as a real romantic rival to Ben for Nella's affections, but he retains a dangerous potential in other respects. He proves he can handle himself with a gun, which keeps him fresh in your mind as a threat to Ben and Clint. But the arguable virtue of Walsh's film is its ultimate refusal to make Stark a villain. He's an antagonist, certainly, but he never becomes the bad guy. Remember, after all, that he starts the film as an innocent victim of the Allisons -- a fact the film might have reminded us of more often to maintain more suspense as the drive nears Montana. But his calculating nature is precisely what keeps him from becoming a foolhardy villain. He and Ben are more alike than either think, but Ben has a certain something extra that makes him popular and earns him loyalty that Stark can never claim. At the end, Stark himself realizes this, describing Ben as the kind of man kids dream of being when they grow up and old men wish they had been. Clark Gable embodies that ideal admirably, occupying the middle ground between Mitchell's hothead and Ryan's reserve. He's not the driven obsessive we see in so many Fifties westerns, despite the opening his guerrilla past provides. Ben Allison is just a simple man who can be depended on to do the right thing.

To get a sense of the kind of film The Tall Men is, consider the ending. It's an anticlimax after the huge cattle stampede/Indian battle during the last stage of the drive, but its the climax of the rivalry between Allison and Stark. If this were a Seventies western if would end quite differently, with one or both men dead. Walsh's film has a happy ending, however, as the ultimate proof that, while both Ben and Stark can kill if necessary, neither man is a killer by nature and neither needs to kill on this occasion. That resolution may seem anticlimactic by action-movie standards, but maybe it means that The Tall Men is an adult western after all.
Posted by Samuel Wilson at 2:28 PM

Columbia Classics has launched Screen Classics by Request – an online store bringing you and yours never before released classic films on DVD. Wishing you had Genghis Khan in your classic film collection? Now you can. The Bridge on the River Kwai on Blu-ray? That’s available too. Shop the store - www.Columbia-Classics.com - and be the first to own famed Hollywood classics, now restored for the highest quality DVD you can own.

Indulge your classic film craving at www.youtube.com/ColumbiaClassics for trailers and clips of your favorite films. Here’s a little taste of the goodies we have to offer: http://www.youtube.com/watch?v=23h8NhYwbHY

Feel free to share the video with friends, we aren’t shy!