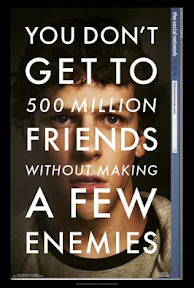 Count me among the multitude who thought that the founding of Facebook could never be a cinematic subject. Some of my friends still question my decision to spend money on David Fincher's new film, but a week's worth of nearly unreserved critical acclaim broke down my resistance. Fincher is due some benefit of the doubt as well, having directed Zodiac, my favorite film of the last decade. But Fincher wasn't enough to get me out to Benjamin Button, and I still haven't seen that movie. With The Social Network I had a notion that Fincher and screenwriter Aaron Sorkin were using the story of Mark Zuckerberg to say something about the society and the cultural moment in which Zuckerberg and his disputed creation have flourished. I have little interest in Facebook itself -- I suppose I'm narcissist enough having a blog without going there -- but the creation and the dispute could well illustrate things more worthy of our attention.

The screenplay brackets the Facebook mystery -- who really deserves credit for its creation? -- with the mystery of Mark Zuckerberg himself. In the first scene, a girlfriend (Rooney Mara) dumps him after a contentious conversation in a bar. She tells him that he shouldn't assume that people won't like him because they think he's a nerd; it'll because they know he's an asshole. Zuckerberg does much subsequently to prove her point, but near the end, a lawyer tells him, "You're not an asshole. You just try so hard to be one." Does that mean he's a nerd after all, or none of the above? A different perspective on Zuckerberg might portray him as the avenging nerd who triumphs over snobs, jocks and capitalists through sheer brainwork and sitzfleisch. But Sorkin and Fincher seem to think that the Internet age and the pre-existing "social network" that Zuckerberg hacks into and expands empower the transformation of the once lovable or at least sympathetic nerd into something darker, someone who can infuse pure id into the bloodstream of collective consciousness. The filmmakers close the story with a pass at pathos as Zuckerberg tries to "friend" the girl who dumped him and refreshes his screen repeatedly hoping for confirmation. They could be saying that he's a lonely nerd after all, but the attempted friending could just as well be the sort of sentimental, self-pitying gesture we'd expect of Charles Foster Kane.

That ending reminds us of the last time we actually see the former girlfriend on screen, when she unforgivingly rebuffs Zuckerberg as he repeatedly demands a minute alone with her to explain himself properly. This is one instance where he can't get the proper hearing to which he feels entitled. Another more damaging instance comes when his lawyers advise him to settle with his several plaintiffs. While he believes himself sincerely to be the sole inventor of Facebook and wants to prove that to a jury, the lawyer who calls him "not an asshole" assures him that the toxic combination of the charges against him and his personality would doom Zuckerberg before his presumed peers. Sorkin's larger point seems to be that Zuckerberg is a victim of his own creation. He's accelerated the evolution of a culture governed by instantaneous, apparently irreversible personal impressions based on superficial information, and he eventually pays a hefty price for it -- monetarily at least.

The same scene, which denies us the courtroom drama we might have expected from such a story, echoes the earlier scene in which the Harvard president rebuffs the Winkelvoss twins (Armie Hammer) when they demand that the school take action against Zuckerberg for stealing their idea for "Harvard Connection" to create Thefacebook. On a gut level, you can't help agreeing that Zuckerberg stole their idea, even if they had nothing like his ambition and vision, but the president, once a Secretary of the Treasury, basically tells the twins to grow up and go invent something else. One of the twins had hoped that their dispute with Zuckerberg could be resolved in a matter befitting "gentlemen of Harvard," but honor has nothing to do with competitive commerce now, while Zuckerberg's scene with the lawyer warns that the rule of law itself has come unmoored from any notion of justice grounded in objective truth. Zuckerberg and the "Winkelvii" will not be judged according to any criteria that they can agree on as objective, leaving it impossible for a movie audience to determine whether the twins finally got more or less than they deserved.

As for the truth behind the creation of Facebook, the whole truth may be more than the sum of the individual parts, including Zuckerberg's naive capitalist partner Eduardo Saverin (Andrew Garfield). Fincher's portrayal of the decadent academic milieu where FaceMash and Thefacebook were born leaves me assuming that the audience for Facebook and its bitchy superficialities was already in place, and that someone else would have done it -- maybe even crackpot visionary Sean Parker (Justin Timberlake) -- if Zuckerberg hadn't happened to get there first. The Social Network is a kind of jeremiad against the last decade, equating the construction of Zuckerberg's virtual social network with a real-world social breakdown in which all values -- even the conventional capitalism that should have made Saverin a billionaire -- are coming apart in a perpetual clash of egos and ids. Hiring Trent Reznor to collaborate on the ominous soundtrack was an inspired choice that makes this story of business rivalries sound quite like one of Fincher's brutal genre films.

The film itself, despite or because of its fragmented flashback structure, speeds across the screen compared to the epically-constructed Zodiac, shaving nearly an hour off the earlier film's running time. At that, Social Network could have been shorter still, since a sequence showing the twins losing a regatta in England to the music of Grieg feels completely superfluous. It may be there to give Fincher some action to film, or it may reflect his feeling that he has a winner in Armie Hammer's seamlessly CGI-enabled dual role. It may be unfair that, as one twin says, there are two of him on screen, but I think he's worthy of Oscar consideration for Best Supporting Actor. Jesse Eisenberg as Zuckerberg should be considered for Best Actor; his implacably intense performance really won my respect. To go off on a tangent for a moment, I have to say that Andrew Garfield was good here as arguably the most sympathetic character in the movie, but he still looks all wrong for Spider-Man -- the wrong body type and too old-looking already for a supposedly younger version of the character. But I don't hold that against his work here; the guy's got promise.

I'm not here to convince anyone that The Social Network is interesting enough to claim your money at the multiplex. The subject matter, even in a larger context, will probably seem hopelessly dull or pointless to many people -- though not as many as I first assumed, given its success at the box office. Whether the subject interests you or not, Fincher's film is still the best theatrical release of 2010 that I've seen so far.
Posted by Samuel Wilson at 2:18 PM

Samuel, Great review. Like you I haven't dipped my cyber-toes into the Facebook pool. I was surprised though at how much I liked this movie. It really grabbed me and I found myself thinking over parts of it days later. You are right about Oscar nods for Eisenberg and Hammer (though I think Hammer will be overlooked for Justin Timberlake's more flashy performance). After Eisenberg, I think it's Garfield who turned in the best performance. There were so many moments when he could have descended into overacting, but held back nicely. Also, Aaron Sorkin's script is, for now, the front runner for a best adapted screenplay award. Great writing and, overall, a very good movie.

stonerphonic: bookface...sounds like a brand ... let me get back to you....

Jason: I agree with you on the overall quality of the ensemble. I don't like Timberlake's chances for an award if only because I suspect that people won't care to distinguish between Sean Parker's and Timberlake's own charismatic obnoxiousness.