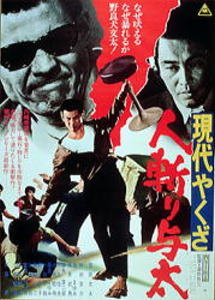 Director Kinji Fukasaku and actor Bunta Sugawara will go down in film history for their collaboration on the incredible five-film Battles Without Honor and Humanity series (aka Yakuza Papers) released in 1973 and 1974. In those stories Sugawara played a stoic survivor, but here, a year before the major project, Fukasaku directs him in mad-dog mode as a gangster rising from the gutter but never knowing when to quit or when to compromise. Isamu Okita is a product of poverty, orphaned at an early age by an indifferent mother as illustrated by flashbacks that open in black&white but bleed gracefully into full color -- a device Fukasaku used earlier in Blackmail is My Life. He joins a gang that preys on young women just arriving in the big city, kidnapping and raping them, then selling them to pimps. In the natural course of events he ends up in stir for a time, and his release in when the story proper starts.

Organized crime has gotten more organized and sophisticated. Okita's old Tokyo neighborhood is contested turf for two yakuza gangs whom he hopes to play off each other. He also figures that he can press the more respectable of the two gangs, presuming that they'll be reluctant to take high-profile reprisals. His street-thug tactics are oldschool but effective, and he soon has his own little enclave of vice to reign over. Conflict escalates, however, when the respectable gang calls on a powerful regional clan for aid, offering them a lucrative foothold in the big city. These dudes are tougher than either gang, and when Okita offends their boss, even Boss Yato (real-life yakuza turned actor Noburo Ando), the gang leader who has a grudging nostalgic affection for our hero, demands that he apologize. Apologies aren't in Okita's nature, however. He does what he wants and takes what he wants and damns the consequences.

Simmering through the story is a subplot involving Okita's love-hate relationship with a prostitute (Mayumi Nagisa) who's hired to entertain him after his release from prison. She finds him strangely familiar, and once she recognizes him as one of the gang that had raped her and whored her out the day she arrived in Tokyo she tries to slice him up. Despite this awkward start, they strike up a sporadic relationship. Okita hooks up with other women, but they risk getting their faces slashed by the Nagisa character in one of her fits of jealous rage. Despite the constant hostility and frequent violence, Okita is constantly drawn back to her. It may have something to do with his conflicted feelings for his own mother, a whore in her own right and the first person he ever recalls hitting. Maybe he recognizes a kindred spirit in her fury, too.

Mayumi Nagisa gives a powerful performance as a raging, ruined woman whose only real relationship is with the man who ruined her.

The two storylines -- Okita's frenetic maneuvering among the yakuza factions and his fraught romance with Nagisa -- finally merge at the moment when, for the sake of his few surviving men, Okita decides to compromise and apologize to the big boss. Having already chopped off his pinky in required fashion, he's due for a major beatdown as well, but when Nagisa stumbles on the scene she fears the worst and comes to her man's defense, blade flashing. And when the thugs turn on her, all bets are off for Okita and everyone else....

I don't think mad-dog is Sugawara's ideal mode. That may be because my first impression of him comes from the Battles films, but there's a world-weariness and brooding intelligence to him -- a quality that also emerges in Fukasaku's Cops vs. Thugs -- that makes it seem wasteful for him to play crazy idiots. He can take the type to outlandish yet entertaining extremes bordering on self-parody, as in the White Heat-inspired Yokohama Underworld:Machine Gun Dragon, but I like him better the less hysterical he gets. He's good in Street Mobster just the same, in part because he can convey that he doesn't really fully understand why he does what he does, especially when it comes to his quasi-girlfriend. On some level he just refuses to question himself, just as he refuses to compromise until it's really too late. While Sugawara is fine for the role, Nagisa threatens to steal the film every time she appears. Her rage and her enigmatic passion for Okita make a potent impression, and the fact that Nagisa had a brief career, including only one film after 1974, was instantly disappointing to me.

Fukasaku's directoral style never gets tired for me. It may seem repetitive, but he somehow manages to invest every brawl with uncanny dynamism. His handheld cockeyed framing always makes his stuntmen's antics look painfully authentic. His fight scenes aren't about the choreography of martial arts, but are more like a cinematic ideogram of violence. In Street Mobster Fukasaku is also a master of cityscape, using his locations' towers of architecture and advertising as epic backdrops for Sugawara's strutting and barnstorming. I've seen enough of his movies to say that Street Mobster is a relatively minor Fukasaku film, but it's still thrilling to look at and a sample of more ambitious work yet to come.
Posted by Samuel Wilson at 12:00 PM

Fukasaku is one of my favorite directors, and Yakuza Papers his best film, but I haven't seen this one yet. I'm on it! Shoot me an e-mail, I'm working on a group blog-project I'd like you to participate in.

"Fukasaku's directoral style never gets tired for me. It may seem repetitive, but he somehow manages to invest every brawl with uncanny dynamism. His handheld cockeyed framing always makes his stuntmen's antics look painfully authentic. His fight scenes aren't about the choreography of martial arts, but are more like a cinematic ideogram of violence."

Of course I've seen others by this director Samuel, but not this "minor" work. Again you have penned an accomplished treatment of a film with a fascinating subject. I found the passage above as the most vital qualifier of your review, and one that dismisses the more facile assessment that some might come by.

Goodkind: I have to agree about Yakuza Papers; the real challenge may be to decide which of the five episodes is best.

Sam: I've often written here that Toei Studios, Fukasaku's headquarters, was Japan's 1970s answer to Warner Bros. in the 1930s. That'd make Fukasaku pretty much Toei's answer to William Wellman in terms of furious output in either sense of the term. Actors like Sugawara add the charisma and heart that Warners also enjoyed from its classic stock company. Fukasaku is still overdue for an adeqaute appreciation of his career in full.