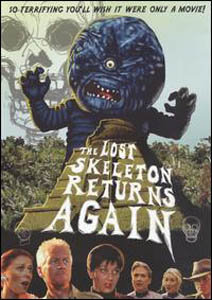 Sequels weren't that common back when the movies that inspired Larry Blamire's Lost Skeleton films were made -- War of the Colossal Beast is one exception -- but Blamire makes exploitation films for our time, and the thing to do these days is exploit your own work. The Lost Skeleton of Cadavra got an adventuresome theatrical release from Columbia ("the studio that gave you Lawrence of Arabia and Zombies of Mora Tau!") but I had missed the fact of a sequel until a blog reviewed it. Once I knew about it, I had to see it, since Cadavra was one of the funniest films of the last decade. As a writer, Blamire does a risky high-wire act. He works on two levels simultaneously, offering a pastiche of atomic-age schlock for knowledgeable fans while striving to keep it funny for the laymen. His idiom is a kind of off-key doubletalk word jazz; one beat after a punch line, the viewer's supposed to ask, "what did they just say?" and laugh as it all sinks in. Blamire exaggerates the illogic of an Ed Wood into outright nonsense ("If I see you making moves on my wife again I'll eat your hands!" Blamire's scientist hero threatens a presumed romantic rival, who answers, "Try that and you'll have company!") uttered with authentic artlessness by his stock company of cronies. The Lost Skeleton Returns Again includes a kind of homage to Blamire's own style in an evil scientist's promise to teach a naive native the secret power of the double negative. But sometimes Blamire gets lost in his own verbal labyrinths and exchanges cease to be funny. Fortunately, his format allows him to shrug off any longeurs, or have his actors literally shrug them off for him and move on.

Part of the overall gag of Returns Again is the fact that, while the setting has changed to South America, most of the locations haven't, while many of the cast are wearing exactly the same costumes as in Cadavra, even when they aren't playing the same people, but rather their twins. The famous Skeleton, however, has been reduced to a mere skull following his first misadventure, but he remains as petulant and domineering as ever. Hearing him call people fools and idiots never gets tired. For more than half its length, Returns Again promises to be as consistently funny as the original film. That its plot is baldly derivative of Cadavra itself is part of the joke, while Blamire's redemption arc for his now-alcoholic and self-consciously "bitter" hero is brazenly irrelevant to everything going on around him. That the cat-suited Animala can be reconstituted from four random Amazonian animals yet retain her personality and secret identity ("Pammy") from the first film is a sublime absurdity, while the Skeleton (it's just wrong as well as a slight to Freddy Francis to refer to the diminished villain as "the Skull") is a joy to watch in wire-assisted flying-attack mode.

But if a film like this can jump the shark at all, it does so when the rival teams of explorers cross the color border and enter the land of the Cantaloupe people. Blamire stumbles badly here, never managing to find the right tone for these dubious aboriginals. As Queen Chinfa, Alison Martin careens from borscht-belt bluster to Tarzanesque pidgin in what appears to be not a put-on but a genuinely bad performance. She's at her worst when Blamire requires her to perform the Cantaloupe Dance in a sequence that exposes the director's own weakness with physical sight gags. He's satisfied that Martin is funny as long as she's awkward, but her extremely tentative awkwardness does not amuse. Blamire also mistakes mere awkwardness for humor in a late-developing running gag as a dying character wishes for his redeemed family name to be sung across the cosmos, and literal minded Lattis and Kro-Bar, the returning aliens from the first film, oblige him in abrasive fashion. It isn't funny the first time and it's less funny when the entire surviving cast reprises the gag at the end. Susan McConnell and Andrew Parks, who play the inept spacefolk, have inferior material to work with this time. Their terrified ascent of a flight of stairs and their helpless confrontation with a closed door were among the highlights of Cadavra. In the sequel their big scene, apart from their wretched singing, involves their manhandling of a meal in response to the challenge that they hadn't touched their food. Meanwhile, Blamire has no idea of how to make his characters' battles with the film's adorably cheesy monsters (or with the flying Skeleton head -- don't call it a skull!) look funny beyond the minimally inherent humor of the situation. Each such battle looks like the one before, except for one bit when a monster gets to toss around a dummy standing in for a victimized scientist. The more action-packed Returns Again becomes, the more tedious it gets.

In the balance, however, there's still more than enough prime Blamirean humor here to justify a recommendation to anyone who enjoyed the original Lost Skeleton and anyone interested in a parody pastiche of atom-age sci-fi. Even during the increasingly draggy second half, the film snaps back to life whenever characters other than Chinfa get a chance to talk. If the monster fights are badly staged, the running gag of "It's funny...." death speeches allows for nice recoveries. In the end, I can't hold it too much against a film inspired by bad movies that it's partly bad itself. For all I know, Blamire meant it that way.
Posted by Samuel Wilson at 11:38 PM